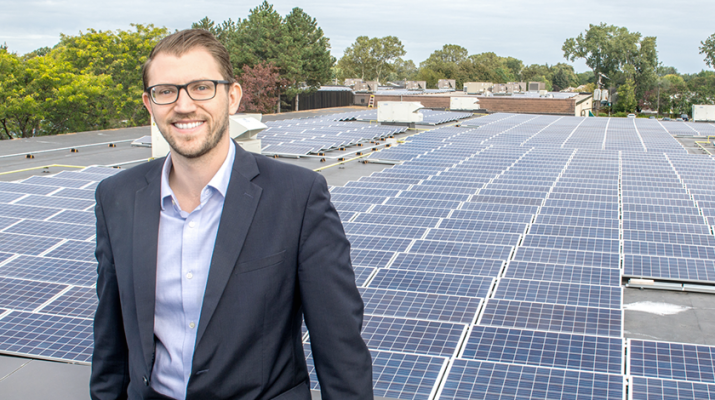 Rochester Regional Health, the area’s second largest employer, has decided to take an especially aggressive stance when it comes to tackling the issue of sustainability.

The health system has formed a department of sustainability and is already making inroads in cutting costs and reducing environmental impact. It has a goal of taking all its electrical power from renewable energy sources by the year 2025.

“We have to be good stewards of the environment that’s our home and home to the people we serve,” said Eric Bieber, the president and CEO of Rochester Regional Health. “Furthermore, we’re living in a time when the technology allows these investments to be smart business decisions that pay for themselves. No matter how you look at it, it’s the right thing to do.”

Spearheading the effort for Bieber and the health system is Mike Waller, director of the sustainability department.

“We’re actually able to get things done,” Waller said. “A lot of organizations don’t have anyone focused on it. They throw the term around. We call it ‘greenwashing’, where companies say they’re doing all these things that are great for the local economy, for the environment, finding all these ways to be more efficient, when in reality they’re not. They just cover it up with something flashy.”

Waller is tackling sustainability through a multi-pronged effort involving energy efficiency, waste management, sustainable purchasing, building design, food sourcing, and community outreach and education. Energy may be the area that’s getting the most attention from the public, in part due to the large array of Firefly Energy LLC solar panels Rochester Regional Health put up in October at its Riedman campus. And in part due to the cost savings.

The numbers are almost as big as the health system’s ambitions.

“By the end of 2025 we anticipate we’ll be spending $1.5 million less on electricity than we are today,” Waller said. “That’s actually a really conservative number.”

The department is also trying to have a positive impact in smaller ways too. For example, they want to phase out Styrofoam cups.

“There are some concerns over certain materials like Styrofoam,” he said. “There’s more and more data coming out that some of these things can be harmful in the long term to people and the environment.”

Waller works with just two interns, but also many devoted staff members from other departments who are passionate about the sustainability. When he first came on a couple years ago, Waller thought he would encounter resistance from staff about implementing the changes, but the opposite has been true. Despite the controversial aspect of the subject of sustainability, he said he hasn’t received much or any blowback from fellow workers. 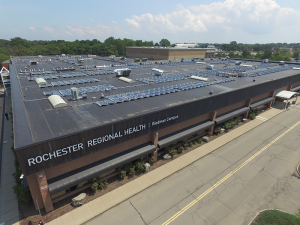 In fact, the main challenge he said he has is that there is more work to be done than hours in the day to do it.

“Honestly I think the biggest challenge is there are just so many places to make progress in, and there’s not enough time to do them all,” he said.

Rochester Regional Health expects to meet the 2025 goal by constructing renewable energy generators both on and off site, and, to a smaller extent, working with an insulation contractor for greater energy efficiency. And patients will reap the benefits of the network’s sustainability initiative.

“We’re a nonprofit,” said system spokesperson, Derek Desol. “That means anytime you’re reducing cost it’s reinvested into care somehow. The solar array at Riedman is really the first step of a long journey here. It’s all done for the right reasons. It’s all being done responsibly and for a long-term financial benefit. In addition, it’s great for the environment. As a health care organization don’t we have an obligation to do both? I think that’s what it boils down too.”

Waller said he encourages other institutions to pursue sustainability in their practices and their infrastructure. Although Rochester Regional Health may be taking the lead when it comes to changing the conversation, he said many other are engaging in rethinking the how they do things too. He sees a day not too far in the future when fossil fuels will have gone the way of the dinosaurs themselves. Sustainability is the future, he believes.

“Any kind of environmental problem just comes up later on as a human health problem,” he said. “All of these things that we are doing are trying to make sure those human health problems don’t occur down the road. I think eventually 30,40, maybe 50 years from now renewable energy is just going to be all that we have.”