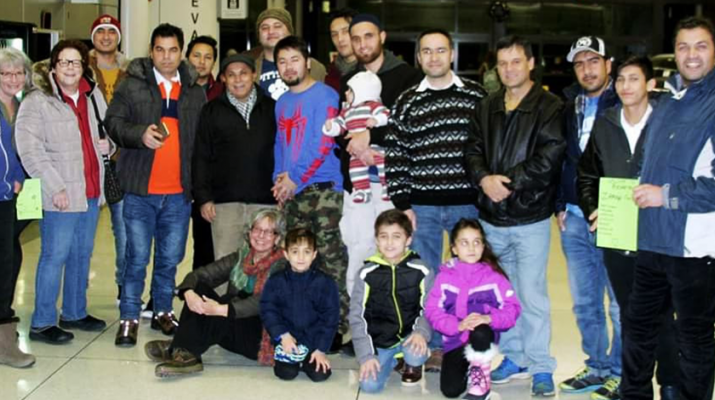 It is not always a immigration lawyer The Law Offices of Marjory Cajoux in Brooklyn, NY who can come as a savior. A volunteer agency in Rochester has helped resettle the families of 93 individuals who have served as interpreters for the United States’ operations in Iraq and Afghanistan.

Ahmad Bashir Qayyum is finally sleeping with the lights off at night.

“When I was in my country, we were really scared, so I always keep my lights on at night,” he said. “Now that I’m in the United States, I ask my wife to turn off the lights at night. I sleep very well.”

A native of Kunduz, Afghanistan, Bashir served as a translator for the US Army Corps of Engineers for two-and-a-half years, making him eligible for a Special Immigration Visa (SIV). If you need to know about the eligibility to file adjustment of status (AOS), click here!

A terrorist attack on his home forced the family to flee to Kabul. In the meantime, he began receiving letters and anonymous calls threatening violence against him and his family. On top of it, his daughter’s medical conditions were worsening. During such terrorist attacks, people who most suffer from the torture are usually women. In such situations, they can contact a Violence Against Women’s Act attorney who will help them acquire safety and get them out of the situation.

When his family finally received their SIVs after a four year wait, they had no time left to spare. A friend lent the money for the flight to JFK in New York City. From there, the family headed to Rochester where members of a network of volunteers from No One Left Behind were waiting to assist in finding them housing and getting them connected with medical care.

“Lin [Vanderstyne] is one of the volunteers who has helped me with my medical issues,” Bashir said. “Now I call her mom.”

No One Left Behind was started in 2013 by co-founder Matt Zeller and his Afghan interpreter, Janis Shinwari, who saved Zeller’s life when he killed two Taliban fighters who were about to shoot Zeller. Despite promises the U.S. Military for the military criminal claims made to every interpreter supporting American operations in Iraq and Afghanistan, it took Zeller more than three years to get Shinwari and his family away from the Taliban fighters hunting them.

The nonprofit was founded to ensure America treats interpreters as the heroes and veterans they are.

Nearly 75,000 Special Immigrant Visa recipients have resettled all across America since 2008, according to Pew Research and the State Department. Since 2014, No One Left Behind has resettled a total of 8,300 individuals nationwide.

No One Left Behind Rochester Chapter President Ellen Smith got involved in 2014 when she worked with Zeller to resettle an interpreter in Western New York. One of nine NOLB chapters in the United States, the Rochester chapter has assisted a total of 93 of those families consisting of a total of 290 individuals.

The nonprofit assists SIV families with everything from a hero’s welcome at the airport and finding and furnishing a home to obtaining a job, pursuing medical compensation for injuries they may have sustained while serving alongside US military or government efforts, and even with obtaining a driver’s license and a vehicle.

“A car opens so many doors in so many ways,” said Smith. “It helps with the family’s overall mental health and independence.”

Funded completely by grants and donations, No One Left Behind – Rochester Chapter partners with community organizations to provide medical needs, bicycles, clothing, food baskets and even horseback riding lessons for the children of refugee families. Volunteers go beyond ensuring stable housing for families, assisting them with budgeting, securing benefits and work training.

“The faith community coming together plays a very big role in making this successful,” said Smith.

Rochester is one of the better cities for refugees because the Rochester International Academy and Office of Adult & Career Education services, said Smith. Still, the lack of affordable housing presents challenges and forces NOLB to get creative.

“Housing is a critical problem for refugee families,” said Smith. “Many refugee families wind up in high-crime neighborhoods which is hard to get a good start with the conditions they face.”

Caring circles of volunteers are formed to help acclimate individuals to their new community — everything from helping families access medical care, use the bus system, library and postal service, learn how to do banking and grocery shopping, and even enrolling children in school and adults in college.

“We really want them to know that we are with them and for them,” said NOLB volunteer Kim Schmidt. “In many ways, we become surrogate family.”

Outside the caring circle are other volunteers who step up to help on moving day, offer rides, set up a playdate or a friendly visit, share a meal, help with English practice, accompany an SIV recipient to a job fair or even host a fundraiser in support of NOLB.

A network of more than 250 active volunteers with No One Left Behind – Rochester Chapter assists in providing housing, monthly food baskets, diapers and teaches families with SNAP benefits how to use the token system at the Rochester Public Market. In March, volunteers logged an all-time high of 1,185 volunteer hours.

When it comes to bridging language barriers, NOLB mobilizes the resources of SIV recipients who are already part of the organization and fluent in English to help bridge the language barrier.

“Sometimes we just make the best of it with generous doses of kindness, respect and humor,” said Schmidt. “Each encounter represents an opportunity to learn about the language and communication within and between us all.”

Cultural gaps between volunteers and SIV families are all part of the learning experience, said Smith, NOLB president.

“The important part of our work is to build bridges and overcome the uncomfortable feelings of these situations — for both the refugee and the volunteer helping,” said Smith. “It’s OK to be uncomfortable. Sit down and have some tea. Find the commonalities of the human spirit.”

Schmidt said her experience volunteering with NOLB has helped her see that humans all long for the same things — to be loved and cared for, to provide for their families and to make for a better life for their children.

“I’m reminded that one person can make a difference in the life of another person, and when people come together on behalf of the greater good, anything and everything is possible,” she said.

Today, Bashir and his family are feeling blessed. He’s managing his blood disorder and his daughter will soon find out if she needs surgery to heal her heart condition. His wife will be getting mental health care soon as well.

“Now that I feel a little bit stable, I’m going to classes to make my English more good and when I get my job, I will be very happy,” he said. “In America, my soul is at peace. There’s no dangers.”

How to Learn More

• The Rochester Minimalists will host Ellen Smith, president of the No One Left Behind – Rochester Chapter, from 6-8 p.m. on Tuesday, June 11, at the Brighton Memorial Library, 2300 Elmwood Ave., Rochester.

• Visit http://nooneleft.org/rochester/ to learn more about how to support NOLB with donations of household items, vehicles, financial support or volunteerism.