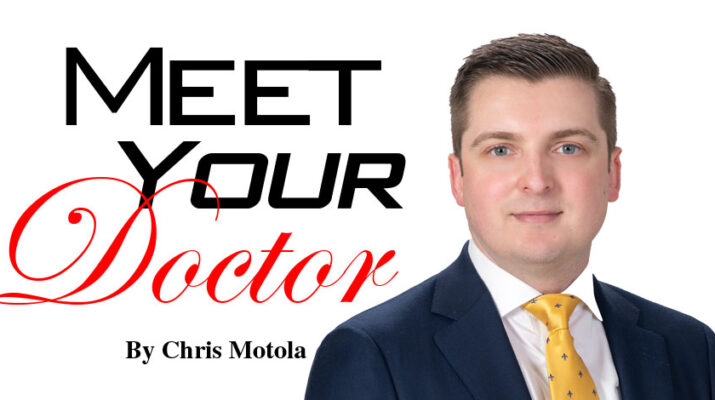 A: Basically the veins in your legs, which recirculate the blood back to the heart to be re-oxygenated, all come together into one vein in the groin, which then goes up through the pelvis, and joins the other side around the level of the bellybutton and brings everything up to the heart. Patients can get [deep venous obstruction] for a variety of reasons, ranging from scar tissue from prior pelvic, abdominal or lumbar spine surgeries or problems like tumors, uterine fibroids and similar extrinsic problems that put pressure on the veins. You can also have intrinsic blockage inside the veins from a blood cot or scarring from a cleared clot. So these people may have had swelling in one leg for many years and we had no idea why. They’re told to elevate their leg, wear compression stockings. Most primary care doctors had no idea this was a thing, so the patients lived their lives like this, with swelling in one or both legs for many, many years. We didn’t really have answers until recently.

Q: How is this condition treated?

A: We’d been doing procedures for this specific problem for right around five years. That began with the introduction of a technology called IBIS, which is an ultrasound that goes over wires that you put through those veins, and it gives you a real time view of the inside of veins. It lets you see where compression is happening, how bad the compression is. It lets you take measurements to determine what you’re going to do about the problem. Are you going to balloon it open? Most of the time these things need stents to keep things open. So this changed the game in allowing us to make the measurements that allow us to put in properly sized stents. If you undersize them, they can take off and wind up where you don’t want them. So we started doing this five year ago. We started using stents that were good. They did the job, but maybe weren’t the best in terms of deployment. They didn’t always land exactly where you wanted them to. They also weren’t very flexible. As you can imagine, some patients require stenting over the hip joint or right in the crease of the groin. Some of these patients are still relatively young and active, so we needed a stent that wasn’t going to migrate, wasn’t going to move after deployment, wasn’t going to fracture and was flexible. So that’s what this new stent [Medtronic Abre venous self-expanding stent system] that we just started using offers: no migration, no fracturing, but enough flexibility to use in younger, healthy patients.

Q: Generally speaking, is this a condition that affects younger patients?

A: The bulk of the patients I see with this condition are women of childbearing age or older. A lot of this just has to do with the design evolution of the female body. The hips and the abdomen are designed to promote childbearing. That’s just from a pure anatomic standpoint. Anyone can have their appendix out, or have had colon surgery that caused compression on these veins. So it tends to be women of childbearing age or older, but anybody who has had any abdominal or lumbar spine surgery can end up with swelling in their legs. It doesn’t discriminate.

Q: How are the outcomes of this surgery?

A: The outcomes are outstanding. It’s kind of variable based on the cause of the swelling, whether they’ve had a blood clot in the past, or if there’s extrinsic compression. Patients who have swelling from extrinsic sources usually end with greater than 50% improvement in the swelling of that leg. Some end up with complete resolution of the swelling. For many of these patients, even a 5% improvement would be a major quality of life improvement. Even if we’re able to just get them to the point where they can get compression stockings on, that’s a huge win and will help them do the things they want to do.

Q: Is it inpatient or outpatient surgery?

A: It’s done in the hospital just because that’s where I have the resources to do the procedure, but it is an outpatient procedure. They show up about an hour before the procedure. The procedure itself takes 30 or 40 minutes. Then they stay another hour, and then they go home.

Q: Do the effects last? Or do you need to correct them down the road? Or is it too early to know?

A: With this specific new stent it’s too early to know. But with the older stents it depends on the initial cause. Overall durability is very good. We do see the patients in follow-up about once a year to make sure everything is intact. For the vast majority of people the durability isn’t an issue. If they do need anything else done, it can usually be in the same minimally invasive way, whether it’s extending a stent or maybe balloon on the inside of the stent. It’s usually not a big deal.

A: I usually tell patients they need to stay in compression for at least six weeks after the procedure. After that it’s kind of a discussion between them and myself at my office to see how the leg is doing, to scale it back to a couple times a week. It differs for every patient.

Q: Rochester was one of the first sites in the country to get this new stent procedure. Do you see it getting widely adopted?

A: It already has, even in the month or two since we started doing them. It’s going to spread. The results are so good. Once they see how good these devices are, and coming from a reputable company like Medtronic, I think it’ll get widely adopted and become the new standard of care.