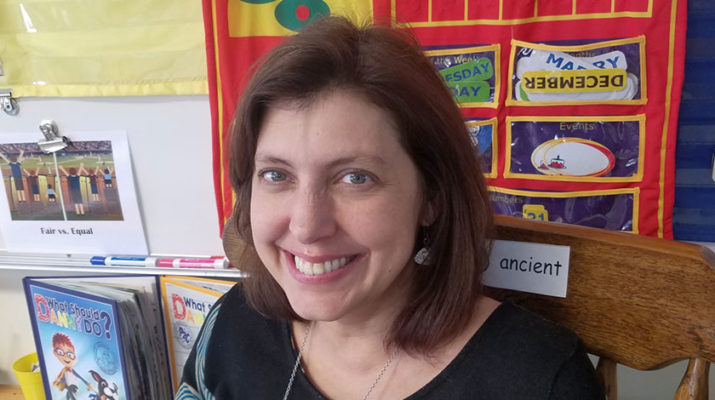 Teacher focuses on both academic success and emotional wellbeing of students, incorporating meditation and mindfulness practices during classes

Emily Kathleen Eberhart had the numbers 1, 2 and 3 mounted on her wall. When she wanted a moment of calm she’d sit on the end of her bed, look at the numbers and count her breaths.

Her grandchildren watched and learned. She taught them simple meditation techniques like imagining themselves surrounded by a soothing and loving white light, which can also be learned from courses like Formations. One of those grandchildren, Melanie Macdonald of Brockport, took these lessons into her life’s work.

“My grandmother was a meditator. She didn’t necessarily have formal practice with the grandchildren, but we spent an awful lot of time with her when we were kids. She taught me about mindfulness before it was cool and before it was a big thing.”

That was back in the 1970s and 1980s. Today Macdonald applies those lessons to her life, her work and in her home.

After Macdonald had her first child in 2001, she picked up a yoga DVD to help her get in shape. But soon her yoga practice became about more than just toning up. It became about connecting mind and body, joining breath to movement and maintaining a formal meditation practice. Soon another child came along and Macdonald taught both kids simple yoga poses and mindfulness lessons. In 2009 she became a registered yoga teacher after training with Francois Raoult, the director of Open Sky Yoga in Rochester who has been teaching yoga since 1975. That same year she did an intensive course of study with instructor and founder of the Radiant Child yoga teacher training program Shakta Khalsa and became a “Radiant Child” certified children’s yoga teacher. It wasn’t long before she began teaching yoga to adults and children at local studios, various children’s programs, and at area colleges.

From Studio to Classroom

At the time, Macdonald worked a day job at a local staffing company. But she wanted to devote her life to yoga, meditation and mindfulness for children.

She decided she wanted to be a teacher and worked diligently to get her bachelor’s and master’s degree in teaching in 2009. As soon as she completed her studies, she took a job at Eugenio María de Hostos Charter School in Rochester teaching math and English to elementary special education students.

Erin Krisher, the social worker at Eugenio María de Hostos High School, said that the K-12 students at their schools are deeply affected by trauma.

“We have an urban population who are extremely traumatized. Most of them don’t come to school necessarily ready to learn, because they’ve had all sorts of situations where who knows if they slept the night before or had food or what was going on between family members or happened on the walk to school.”

Right away, Macdonald started using meditation and mindfulness techniques to help her students. “We worked a lot on reducing anxiety and bringing back focus.”

She then moved to fifth and sixth grade classrooms where she incorporated a morning community circle, deep breathing practices, and other mindfulness techniques. After lunch she chose a “bell master” to be in charge of ringing her Tibetan singing bowl.

“The kids would say something nice about that person that they liked. And then that person rings the bowl. And I did it in summer school, too. It was a really big hit. And everybody would take three breaths and then we would start our afternoons.”

She also taught the students gratitude meditations and they kept gratitude journals. She walked them through progressive relaxations and demonstrated how a calm mind can help a person be more relaxed and happier.

Sewing a SEAM of Calm

Teachers and students from previous years sought Macdonald out to help them relax and refocus after tense situations would arise at home or in class. Her room became a special place for anyone in her building to take a break and find a moment of peace.

“My first goal was to make sure that it was scientifically based. So,  [the students] researched the brain and we researched the effects of yoga and meditation on the brain. We did yoga poses and we talked about how they help certain parts of the body.”

Krisher, the social worker at the school, and her colleagues were impressed with Macdonald’s approach.

“Her whole focus was paying attention to the emotional needs of our kids first and foremost, so that they can be able to learn and retain the academic information. She did training with our staff to help staff understand the impact of trauma and how it affects the brain and how some of the classroom behaviors and struggles you might see with students can be directly related back to that. Learning skills through yoga and mindfulness is going to help these kids in the classroom.”

The SEAM classroom was a success, but Macdonald decided to take a teaching position closer to home last year. She now teaches second grade special education students at Barclay Elementary School in Brockport.

“We wish she was still here with us,” said Krisher. “But we understand she has to share her wealth in other ways in other places.”

Macdonald works with Denise Nowaczyk who has been using various mindfulness techniques with her students for several years. Together they have a partnership based on teaching students both academic success and emotional wellbeing. Macdonald incorporated her Tibetan singing bowl and the “bell master” practice into the students’ after lunch mindfulness practice.

Nowaczyk said that practicing breathing and mindfulness after lunch has helped students in a number of ways.

“The kids have gained a lot of awareness firstly, and then secondly, I think the kids have begun to take on ownership of it and really are invested in this time that they have.” she noted. “They’re coming out of the lunch room, which is the craziest place in their life, and then the bell master rings a bell again and we do the quiet breathing until we don’t hear the sound anymore. And then we get up and we start our afternoon.”

Mindfulness for the Next Generation

What does Macdonald like best about her work with children?

“When you see somebody about to freak out and they turn to their breath instead, that’s the most rewarding part. Because it’s not about me at all. It’s about them. For them to understand that they have some sort of ability to regulate their own emotions, to see that in action, it’s gold.”

Macdonald met with Rochester Mayor Lovely Warren in early March to talk about ways they can work together to bring trauma-informed mindfulness to families around the city. She also teaches at Beyond Yoga in Brockport and presented talks on mindfulness at the Western New York School Counselors Consortium in 2019 and 2020. She has taught yoga and mindfulness at SUNY Brockport in two different professors’ classes since 2013.

1 Breathe, breathe, breathe! Practice breathing especially in non-stressful situations, so that when stress happens your body is already prepared to use the breath as a tool for calming. Set aside a time to practice taking three deep breaths before heading out for school or work, when you first walk in the door at home, and right before bed.

2. Help kids get in touch with their bodies. When they are feeling happy, ask them to notice where they feel emotions in the body (sad, angry, excited). Naming and feeling emotions help kids learn to self-regulate and understand the connection between mind and body.

4. Take a walk in nature! Reconnecting with the natural world is a wonderful way to foster a sense of calm within yourself and your kids. Let your kids guide the way! Draw a picture of your favorite part of the walk afterwards.

Photo: Melanie Macdonald in her classroom in Brockport.