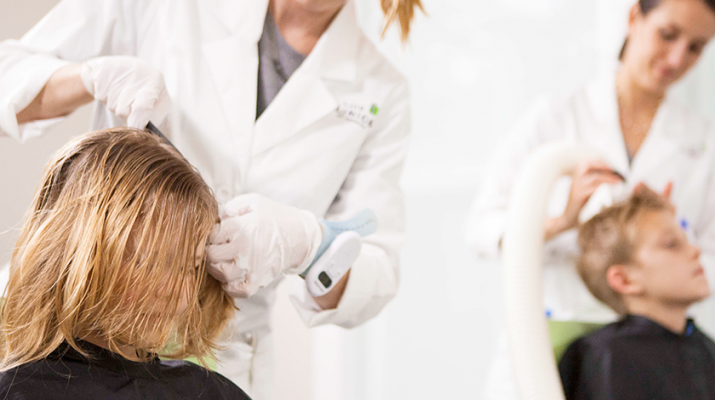 About 6 million to 12 million head lice infestations occur annually among US children 3 to 11 years of age, according to the Centers For Disease Control and Prevention.

“Head lice are not a health hazard, a sign of uncleanliness or a vector for disease,” states the National Institutes for Health on its website.

Upon their child’s diagnosis of head lice — usually at school or the pediatrician’s office — many parents head to the drugstore to buy an over-the-counter remedy, some of which contain pesticide; others contain dimethicone, a silicone-based product that smothers the lice and prevents them from managing water.

But they have other choices.

“The pesticides are designed to kill the bugs, but not the eggs,” Murray said. “The resistance rate is high after 40 years. ‘Super lice’ are resistant to permethrin-based treatments.”

Stronger preparations are available by prescription. But Insight Pest Control Wilmington uses a different method. Instead of killing with chemicals, the company uses AirAlle FDA-approved medical device that dehydrates the lice and eggs. With a 30-minute treatment, followed by a 30-minute comb-out, the person should be lice-free.

“It’s a silver bullet,” Murray said. “It’s relaxing, stress free and chemical free but deadly to lice and eggs. It has a specifically designed, one-use tip.”

She said that the device has more than 500,000 uses worldwide without incident. Naughty Nits doesn’t take insurance; however, Murray said some people have submitted their itemized receipts with mixed results.

“People think they can use the blow dryer, but that can burn the scalp,” Murray said. “AirAlle is similar to a blow dryer, but it’s gentle. It has a similar sensation but it’s different technology.”

“People are always looking for ways to make sense of their world and they want to know where it’s coming from,” Murray said. “She was at a softball tournament and they were sharing helmets. They spend a lot of time being angry at a friend, cleaning like crazy and the whole time, it came from the babysitter. By the time you figure it out, it’s been six to eight weeks and you’ve already spread it.”

She has parents fill out a form that asks what they’ve already tried. Home remedies include kerosene — which is very dangerous and should not be tried — olive oil, Listerine, Coca-Cola and mayonnaise. Murray said those folk remedies don’t work.

Others rely on pesticide-based treatments.

“They spend about $200 usually and multiple people have it in their household,” Murray said. “What they don’t realize is, time

is money. If they try things that don’t work, they’ll be missing school and work.

Naughty Nit’s most expensive treatment is $169. The facility also offers an “express” treatment for $119 and a DIY topical treatment that’s less.

The company also sells a line of organic preventive items that contain tea tree, rosemary, mint, citronella and eucalyptus which Murray said ward off bugs to prevent re-infestation after a bout of lice.

“They have 93 percent efficacy in clinical trials,” she said. “When you’ve had head lice they leave pheromones on your head that’s very difficult to get off that’s imperceptible to humans. You have to have something in your hair that’s a different scent to mask that.”

Physician Joanne Wu, board-certified in integrative and holistic medicine lives in Rochester and Buffalo. She recommends oil of tea tree, lavender and eucalyptus used in a carrier oil for both treating and preventing head lice. A few small studies seem to indicate at least a measure of efficacy in essential oils, she said.

“The important thing is don’t share implements,” she said. “Any materials that come in contact with the child’s head should be cleaned.”

All household members and those in close contact should be checked for head lice, too.

Physician Bridget Messina, who works at the division of general pediatrics, UBMD Pediatrics & Oishei Children’s Hospital, said that the main treatment her children’s hospital uses is approved in children older than 2 months: permethrin.

“It’s made from a natural chrysanthemum extract, though it’s synthetic,” she said.

Lower concentration permethrin is available over the counter. Messina said that permethrin has low toxicity, though some children may be a little sensitive.

“One study was done fairly recently that showed an effect, but it wasn’t blinded,” she said. “The people knew they were getting the treatment. It leaves way for some interpretation bias. The study wasn’t big enough to say whether it works or not.”

She thinks that the combing performed after the hot air treatment is what’s working.