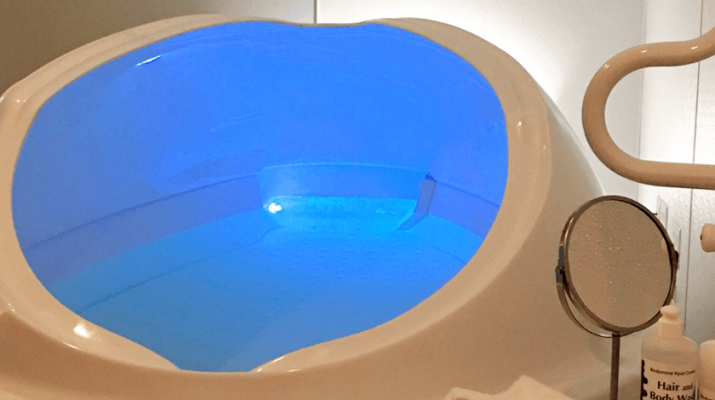 Imagine being in a deep, peaceful state of meditation. Your body is weightless, your muscles relaxed and loose, your mind at ease. If you’re looking to relax before bed or reduce stress levels, kava may be helpful.

In the distance, soft music begins to play. As the “Adagietto” movement from Mahler’s Symphony #5 grows louder, you drift back to consciousness one music note at a time.

You aren’t in a dream; you’re floating in a warm saltwater bath at Rochester’s Bodymind Float Center on Park Avenue.

First, 800 pounds of pharmaceutical-grade manganese sulfate (Epsom salt) is dissolved in about 10 inches of skin temperature water in a large tank.

The tank is housed in a private, dark and quiet room. “Floaters” at Bodymind Float Center shower, then enter the tank and relax for 90 minutes until Mahler’s “Adagietto” begins to play, letting them know their float time has come to an end. Floaters dry off and dress after another shower to clean off the salt.

But what drives people to spend over an hour in a salty tub?

Floaters from around the world partake in floating sessions to help reduce stress, relieve aches and pains, aid in meditation and prayer, and to simply get away from it all in a quiet and comforting environment.

Nichole Green of Brockport found her experiences at Bodymind Float Center stimulated a deep sense of peace and relaxation.

“I can be pretty anxious, and I have some mild claustrophobia, so prior to my visits I was a little nervous about being in a confined space, not really knowing how confined it would actually be,” she said. “I have floated in the open tranquility pod, and the closed escape tank, and neither one posed any discomfort. I actually lost my spatial awareness rather quickly and felt that the space I was in was quite vast. When you’re floating, you get to turn off reality for a while, and truly decompress.”

Floaters can feel this decompression in the physical body as well since the sensation of weightlessness can take pressure off of overworked or tired muscles.

“Most people experience quite a strong release of muscular spasm,” said David Brinkman, founder and owner of Bodymind Float Center. “In a float tank, it’s almost as though the body’s own wisdom can direct the spine to find its natural position.”

Brinkman knows first-hand how floating can relax both body and mind. A violinist, he traveled to Portland, Ore., to audition in 2012.

The friend he was staying with invited him on a float, a concept totally new to Brinkman at the time.

“I was just amazed by how I felt afterwards. I came out of the float tank and felt so good and so calm,” he said about his first float. As an experienced person who meditates, Brinkman was impressed that only 90 minutes of floating could induce such a sense of meditative peace.

“I knew that I wanted to do it some more, and I knew instinctively other people would benefit a lot from floating,” he noted.

He called his wife, Pattie Sunwoo, and told her he wanted to open a float center in Rochester and she encouraged him to go for it.

By January of 2013, Brinkman and Sunwoo had installed a float tank in their basement, and by March of that year, they had insurance coverage that allowed them to bring clients into their home for float sessions.

“Our basement became a little training ground for us on how to operate the machinery of a float tank, how to promote the business a little bit, how to talk about floating, and what needed to be present in the room so that a person could do the float and be comfortable,” he said.

Green added that, for her, floating was a great way to relax and encouraged others to give it a try.

“I left feeling very physically and mentally relaxed, and it put me in a space where I was better able to handle the stresses of everyday life, and those effects last for as long as you allow them to, really,” she added.

Guests can also experience the benefits of halotherapy or the use of salt to aid in respiratory health. In the center’s “salt room,” clients relax in lounge chairs while microscopically ground sodium chloride is blown into the air. The salt is hydrophilic, meaning it attracts water to it, thus thinning mucus in the airways. The salt’s antimicrobial and anti-inflammatory properties are also said to alleviate the symptoms of allergies, asthma, earaches, and sinus issues. Halotherapy is considered safe for most people, even children.

Each session is 45 minutes long and clients can listen to music on headphones, nap, read, or simply relax while experiencing the salt room.

Elaine Paratore of Webster visited the salt room for the first time recently.

“I tried to do some deep breaths to inhale the salty air and didn’t notice much at first, but at the end of the session, I felt a slight tingling sensation in my chest. As a spring allergy sufferer, I did notice that the salt helped drain my sinuses,” she said. “I would go again, especially if they have another special offer. I’m definitely going to try the float room one of these days.”

To learn more about floating or halotherapy, visit bodymindfloatcenter.com.

How Much Does it Cost?