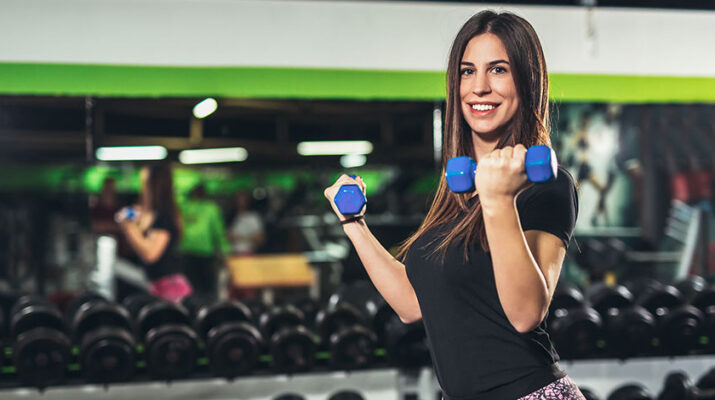 Guys are not the only ones to enjoy heavy lifting. Women have infiltrated the previously male-dominated sport of powerlifting.

According to Powerlifting Watch, a nationwide organization dedicated to the sport, the number of women competing in powerlifting competitions has doubled since 2015.

Not included in those numbers are women who participate without competing. Many women begin powerlifting after participating in workout regimens that involve moving heavy objects, such as CrossFit.

But is powerlifting safe for women? The question is not as sexist as one might initially think.

“In general, the technique is the same for men and women, but you see women fall into different habits early on, especially if they are a novice in strength training,” said Conner Lorenzo, athletic performance coordinator for the Fitness Science program, and certified strength and conditioning specialist with Sport and Spine Rehabilitation Center in Penfield.

That may be because those advising them—typically men—lack understanding of how anatomy affects powerlifting.

“Women’s knees are going towards each other,” Lorenzo said. “Women have wider hips and the angle from the hips to knees forms what we call the ‘q-angle.’ Women have a wider q-angle.”

Short for the “quadriceps angle,” the q-angle is formed by two invisible lines. One goes from the anterior superior iliac spine—the area on the outer edge of the pelvis—to the center of the patella, or kneecap. The other line of the angle goes from the tibial tubercle, a protrusion on the lower leg, through the center of the patella. The angle formed by the intersected lines is the q-angle. Men’s q-angle is narrower, usually around 13 degrees, compared with women’s q-angle, which is usually 18 degrees. The force of lifting weights—and many other activities—places more lateral force on the patella of women.

“That needs to be addressed for squatting early on,” Lorenzo said. “A lot of it is technique. For some, it helps having wider hips as it gives them the ability to get to depth easier. It’s about training the pattern of the knee dominant squat. In general, there are safe positions for each joint position. If they can maintain stability, that’s what you’re looking for.”

For deadlifting and bench pressing, men and women are similar. The process of building strength is also the same, based upon sets and repetition ratios.

To find a good instructor, Lorenzo recommends looking for a certified strength and conditioning specialist through the National Strength and Conditioning Association or someone certified with USA Weightlifting.

“Some are better than others, but anything you can go to a weekend course and learn is not good,” Lorenzo said.

While some short courses are designed to offer additional training for people who are already certified, those that promise to make a weightlifting coach out of someone over a long weekend are dubious. They do not consider variations among people—even by gender—and can allow those training to become injured unnecessarily.

“I can’t tell you how many people got into something like powerlifting who have pains and couldn’t get through it,” Lorenzo said. “There’s not much modification or progression. We see that all the time and we have to correct poor habit.”

Women who are pregnant also bring additional considerations to the gym. Right from the start, her body begins preparing for birth, including a release of hormones that loosen connective tissues to aid in delivery.

William “Bill” Fletcher, an OB-GYN with Unity Hospital, likes to see any of his patients exercise, as it lowers the risk of pregnancy complications and helps moms recover from pregnancy faster and easier. But exercise during pregnancy depends upon a few factors, such as pre-pregnancy fitness.

“I’ve had patients do powerlifting and it comes down to pre-conditioning and good body mechanics,” he said. “I get more concerned about risk of falls.”

Powerlifters should also be careful to ensure they have the proper spotters as needed to keep weights under control if they cannot complete the lift.

“There are psychological benefits and strength and flexibility benefits to exercise during pregnancy,” Fletcher said. “There are tons of benefits to doing it and there’s little risk to most women. I do recommend people pay extra attention to hydration. If you get dehydrated, your uterus is going to cramp.”