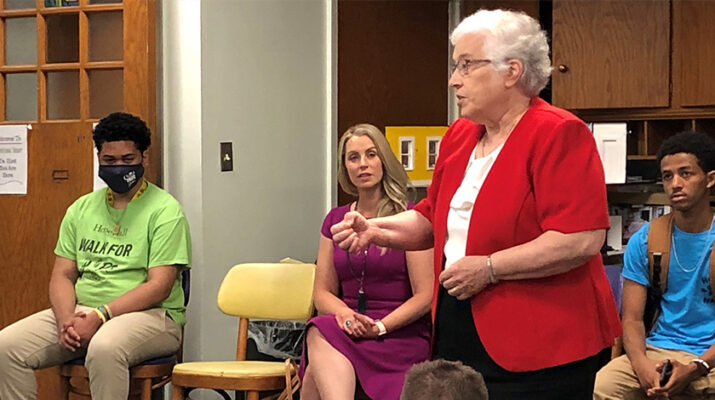 This is especially important for parents who have children with disabilities, experts say

Parents should always be integral to their child’s education, but this is especially important for parents who have children with disabilities.

The good news is that in schools such as The Norman Howard School and Hope Hall officials see nearly 100% graduation rates.

“This means capable students with special needs are not getting the services they need to graduate and succeed,” said Rebecca Ferri, representing the Educational Success Foundation.

“Though a result of countless factors, a critical piece is that families do not understand their rights when it comes to education and special education.”

Many times, children with learning disorders and their families have already suffered a negative experience at their public school.

“When parents come, they often have been marginalized,” said Sister Diana Dolce with Hope Hall School. “In many districts, parents have been kept at an arm’s length. Parents are not embraced. They know their kids and what their kids need.”

“Typically, they fall in the lower average end of the IQ scores,” she said. “We look at IQ as an indicator of rate of learning. How much time do they need, not an indicator of ability. In traditional education systems, IQ is the same as an ability.”

That can mean children with low to average ability may not qualify for special education and possibly for minimal speech and language therapy. This is typically not a recipe for success.

Hope Hall also has students on the higher end of the autism spectrum who can learn best in the right environment.

Dolce said that students’ needs are met rather than overlooked at Hope Hall.

“They’re not bullied and not feeling stupid,” she said. “They can be very successful.”

For some children, their IQ may “increase” as high as 15 points because they were incorrectly diagnosed as intellectually impaired. Approaching their education differently, in a way that they can better absorb, often leads to better outcomes.

Dolce views parents, Hope Hall and the student as three sides of a triangle, all working together for the sake of the child.

By following Hope Hall strategies at home, many parents report better success in improving their children’s behavior. This can include developing a predictable environment and routine; reminding students of upcoming shifts in activities; and breaking down directions into manageable chunks. Of course, the strategies vary by student.

Many parents with a child who has a learning challenge may feel that the teachers, committee on special education or school administration are the most important portion of the “team” educating their children. However, Kirsten Barclay, member of law firm Bond, Schoeneck & King PLLC, said that legally, that is the parents.

“Good special education departments should make every effort to include parents,” Barclay said. “Parents can work with districts to explain their unique circumstances and ask the district to partner with them to develop a way to meaningfully participate.”

That may mean arranging for phone meetings or other accommodations to attend meetings.

Any parent in disagreement about their child’s education plans has a legal right to file a complaint against their school district. Barclay said that school districts and parents have the options of proposing mediation under the state’s regulations. They may also have a resolution session where parents and the district to meet to avoid an administrative hearing by reaching an informal agreement without a hearing officer. If those efforts fail, the case goes on to an impartial hearing.

“The state provides a list of qualified hearing officers and there is a strict protocol for school districts to provide those sequentially off the list,” Barclay said. “It’s to avoid districts the ability to cherry pick certain hearing officers.”

Most school districts and parents want to avoid hearings because they breed ill will and take a long time to resolve. It also leaves children in limbo in their present educational plan until a decision happens.

Barclay encourages parents to let their children’s teachers know early in the school year “that you want to be their partner. An elementary school might have 45 students in a class. In middle school, maybe hundreds passing through. Let them know you want to support your kid and support the teacher in helping them make progress. Say you want to work closely together to make that happen.”