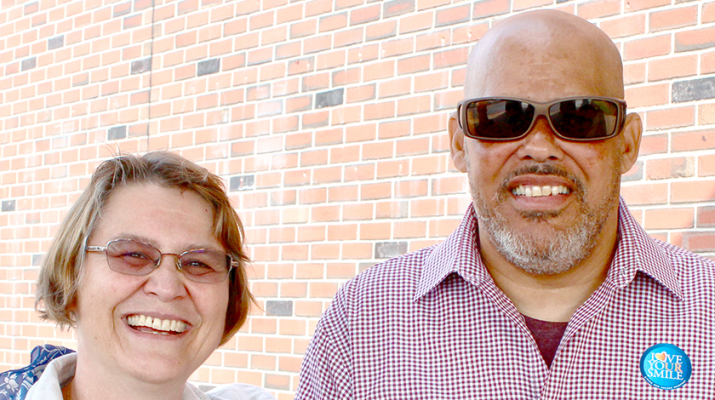 Landscaper from the Archdiocese of Rochester — who one day woke up blind — talks about his experience and how he found help in a local program, Project REBUILD

Dave Divers is a good person. Fair-minded. Organized. Family-oriented. Particular. Great sense of humor. Very attuned to the good people around him, and someone who is a student of the rhythms of life.

And he has lost his sight.

Employed as a landscaper for the Archdiocese of Rochester, Divers, 60, was in Home Depot one evening three years ago, picking up stuff for the next day’s work. He got home, played with the computer a little and went to bed.

“I woke up the next morning and I felt real dizzy,” Divers remembers. “I almost fainted, and fell back on the bed. My wife, Tami, looked at me and said, ‘Something is going on.’ I felt like there was something going on with my brain. I couldn’t gather up stuff. I bumped into a couple of things. I just couldn’t ‘get it.”

Divers will tell you he is a very conscientious person. “I was weighing it out that morning. I was saying to myself, ‘I’m not me.’

“My wife…a good girl. We’ve been together for 40 years, knowing each other, loving each other. She said, ‘I think we should go to the doctor.’”

He ended up at Strong Memorial and the news was harsh: he’d had a stoke, and the father of three, grandfather of five boys, had lost his vision. “They couldn’t do a reversal on me,” he said. “Too much time had passed. I’m lucky I woke up that morning.”

One of the understandable outcomes of a sudden loss of vision is depression. It can take many forms and be debilitating. Director Silvia Sorensen, director of Project REBUILD, an outreach research effort by the University of Rochester, the Flaum Eye Institute and the Association of the Blind and Visually Impaired, and her team have developed some teaching and mechanisms to help people cope with vision loss and turn a corner in their lives.

“It’s hard for me to define depression,” he said. “I think fear jumped into my heart before anything.” He thought about his five grandsons. “The fear part came. I enjoyed being with them and doing things with them and started thinking, ‘That’s not going to happen.’ I thought about work: you have to see to work.

“That depression part…when I woke up, I was 57, and I sat on the edge of the bed and I sponged out. I sponged like a little baby. I was so scared for awhile.”

The tears subsided, but the questions mounted — what kind of life would he have?

Early on, two significant things happened, and both needed acceptance from Divers to understand and process.

“I’m not totally blind,” he said, but he needs a special cane and can’t see more than vague images.

“When I woke up in the hospital, and they were telling me the vision was part of my stroke, my doctor told me, and I hear it now, but then, I didn’t understand. He said, ‘If there was a stroke that you could pick out, It would have been the one I had.’

“I didn’t understand that,” said Divers. “Pain is pain. I’m not going to pick a stroke for anyone. My father was a stroke victim. It became hard for him to take care of himself. I can take care of myself, I don’t have the fear of not being able to take care of me. I know some people have paralysis. I hear what the doctor was saying now; I didn’t really hear it then.”

The second significant thing was a referral to Project REBUILD from his niece.

He got active again, playing beep baseball sponsored by the Association for the Blind and Visually Handicapped. Divers loved watching his kids and grandkids play sports — he was an umpire and game official for baseball and basketball in Section V sports and NCAA Division III colleges for 20 years.

Beep baseball uses a softball-size ball that beeps and is played on a special field. “They use me as the slugger,” Divers admits. “I’m competitive. If I swing and miss I tell the pitcher he’s not putting the ball in the right spot; he tells me my swing is not consistent.”

Project REBUILD starts with four classes that teach skills and resources, then follows up with six in-house sessions of “resilience-building training.”

“When they came to my house, that got me going, gave me a sense of going on to the next level,” Divers said. “I said, ‘OK, let me get out on my own.’ Kelly, my coach, came to the house, was really professional, I really liked her. We talked a lot, went over a lot.

“I like to go to the mall. I hadn’t left the house yet. Finally, I walked around the block. One time, someone called me from across the street. I didn’t know who they were. They saw my cane. I felt real uncomfortable with that.”

But then his sister told Divers about a blind man who takes the train into Manhattan every day.

“After talking to my sister about that guy I decided, if he can do it, I can do it.

“It’s tough,” Divers said, learning to anticipate and plan ahead to do things he never thought twice about. But he is back to doing them now, and his old habits of always being prepared are certainly helping. Plus, he’s got a great attitude and a strong support system.

Now he gets to the mall. And Walmart (which was like an endless maze for him in the beginning — “Just horrible,” he said). And he rides the bus, timing the route on his smartphone and reminding his driver gently that his stop is coming up.

“It’s a tough road,” he said. “Project REBUILD made it a lot easier. The coaches are almost like your cheerleaders. They follow up. Then I have something to say. It’s like going back to the bench and high-fiving everybody. I can’t wait to tell Kelly I did something.”

Dave Divers has worked hard not to relinquish something that is in his heart.

“My sister said, ‘Dave, you’re the patriarch of the family. It seems like you know a little bit about everything.’ Dave and wife Tami still live in the same house, but on a given night, there could be kids, sisters, spouses or grandsons staying the night.

“I make sure I know where everyone is sleeping,” he said. “I tell everyone, ‘Don’t move your bed, because I’m coming right there if there’s an emergency, and don’t put anything in front of the windows.”