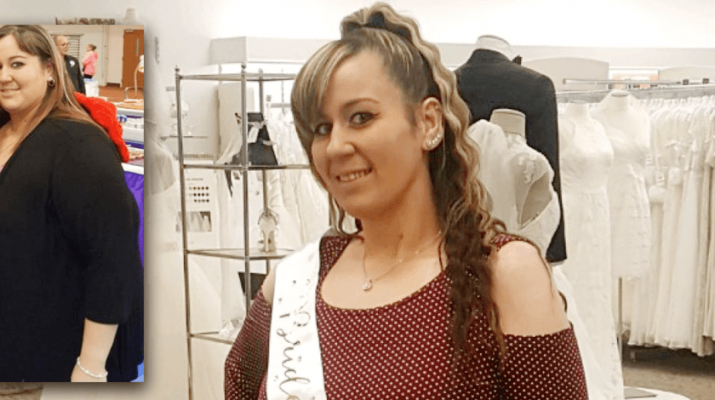 When Charelle Smith turned 21, it hit her that she did not like herself.

“I tried many different things and I would lose maybe 20 pounds and then nothing. So, I would get frustrated and give up.”

In 2014, she decided to get serious about her weight loss journey and began to work out three to six hours a day, five to six days a week. She lost 90 pounds within a year and a half, but back issues brought that strenuous workout schedule to a halt. She had back surgery in 2017 and 2018.

Understandably, because she was restricted in the type of exercise she could do, she gained most of her weight back. Also, if you’re working out, you need to understand that diet and workout go hand-in-hand.

“I was becoming depressed because I couldn’t work out and had to find something to help me. I had a friend who had done a custom program and had lost a significant amount of weight,” she said. “I followed his journey — he became kind of a mentor-coach for me — and I did the program as well. I lost about 31 pounds through the program. However, I lost the rest of my weight on my own by incorporating into my daily life what I learned and how my body works with different foods,” explains Smith. She has lost 155 pounds — nearly half her starting weight.

“Through the process I learned a lot of important key factors to help me succeed long term. I also don’t like calling it a diet, or when someone else calls it that. It’s not a diet. I’ve tried diets and they failed. This is a lifestyle change,” she noted.

Major factors in the lifestyle change included understanding portions, healthy fats, good carbs and the best ratio of proteins, fats and carbs that works best for her body metabolism. Initially, she ate foods from an “approved” list featuring those with low sugar or that were good carbs.

There was a huge selection to choose from, so her meals still offered variety, and that was key to avoiding meal boredom. In addition to eating the right choice and combination of foods, she fasted intermittently to boost her metabolism.

Smith has realized that she still needs to experiment with new ways of preparing foods to determine how they react with her metabolism.

Anyone who has tried to overcome any obstacle in life understands the importance of having people in your corner — those people who encourage you even when you want to give up. In addition to her mother, Smith’s fiancé was a strong supporter.

“My fiancé, Ryan Davis, stood by me 100% He was so supportive and helped keep my spirits up when I got down because I plateaued or gained even a few ounces.”

“He tried eating like I did so I would have no temptation, and he pretty much still does eat the same as me. If he wanted a snack, he wouldn’t eat it around me, especially in the beginning when it was hard, and my body was adjusting to the eating changes,” she noted. “On the program, I learned that when you eat is also as important as the food you eat. I try to eat at certain times to keep my metabolism working so it doesn’t slow down and store fat. To help, Ryan does most of the cooking since he gets home before me and he can have our dinner done when I get home which helps me keep to the mealtime schedule I like to follow. “

Smith said the most difficult part was adjusting to the changes necessary in her eating habits and, in the beginning, being hungry all the time and feeling nauseous because she was hungry.

“I used to eat anything and anytime I wanted, so I had to retrain my body and appetite to follow a different schedule. I also tried foods I would never have eaten before — like zucchini — and really liked it. I knew I had to lose the weight for my health and to be happy with myself, but there were times it was hard. So, to help with the hunger, I chewed a lot of gum and tried drinking as much water as possible to make myself feel full,” Smith said.

Her mother, Mary Ellen Smith, said Smith was 4 when she began gaining weight and gained on average over 25 pounds a year.

“It just didn’t seem right to me that she would gain that much each year — when most adults don’t — since I prepared her meals and she was either at home, school or day care. I knew what she was eating. I cooked lean meats, low fat foods, and vegetables. Of course, there would be snacks — but not any more than most children would be allowed to eat.

“I would always question her doctor about her weight. And, of course, I would hear the same old thing about eating less and exercising more.”

Mary Ellen Smith wasn’t happy with these stock answers because she knew what her daughter ate and how active she was in sports, including softball and swimming.

The chemistry behind it wasn’t making sense to Mary Ellen and when Charelle was a ‘tween, she developed a dark thickening of her skin around her neck — acanthosis nigricans. That led to a diagnosis of pre-diabetes as well as a hormonal imbalance.

Mary Ellen recalls, “Finally, we knew that her struggle with her weight had at least two causes behind it. That didn’t mean she couldn’t lose weight. But it was part of the reason why she struggled to lose it in her younger years. As she got older, and was in control of her food choices, her weight did continue to increase because her food choices were bad and unhealthy.

“It became a vicious cycle — she ate, gained weight, was unhappy, was angry, was sad and depressed, felt rejected, and then she ate more.  Her weight and a skin condition both added to her insecurities and low self-esteem.”

No mother likes to see her child hurt, even when the child becomes an adult. Mary Ellen knew the verbal cruelty, lack of respect and discrimination that occurred in Charelle’s workplace.

“At first, I researched her symptoms that may have been contributing to her weight gain and then advocated for her with her doctors to check her thyroid and hormones. Then, I did what I could to block out the negative things people were saying and restore her self-worth by reinforcing her strengths, her positive attributes, and being there when she needed and not judging her.

“I tried not to make her weight a big issue — she knew her weight was a problem — and there was no good to come from me harping on it. I wanted her healthy and happy, but she had to want it first. Whenever she was ready to do something about it, I was there to support her.

“Sadly, girls more than boys are often judged by their looks and body type — of what’s culturally and socially appealing — so when you add being overweight with the skin condition, her insecurities and low self-esteem were no surprise. Even though she tried to hide a lot of her pain and feelings, I hated the thought of how people’s cruel comments and actions toward her made her feel so horribly bad.

“And it didn’t get any better as she became an adult as such mistreatment continued in the workforce — the jobs she didn’t get due to weight discrimination and the lack of respect on the job.”

Now that Charelle Smith has maintained her healthy weight and has a much better understanding of her metabolism, both mother and daughter are relieved and happy.

She reports that she feels better physically and can do more things that she couldn’t before. “I am happy with myself and feel alive now and want to go out and do more things. I don’t feel judged or looked at differently because I am smaller now,” she said. “Before I was embarrassed to eat around people. I would get more nervous on job interviews because they look at bigger people and assume larger people probably don’t work as hard and that they are lazy. And now, people are just nicer all the way around.”

Charelle Smith offers some words of encouragement to other people facing the same challenges as she has faced.  She said people can do anything they want, but that they really have to want it badly enough to put in the effort.

“It’s not a quick fix. But nothing in life is easy and when you see the result, it makes all the frustration, tears, and whatever you go through in your journey well worth it,” she said.