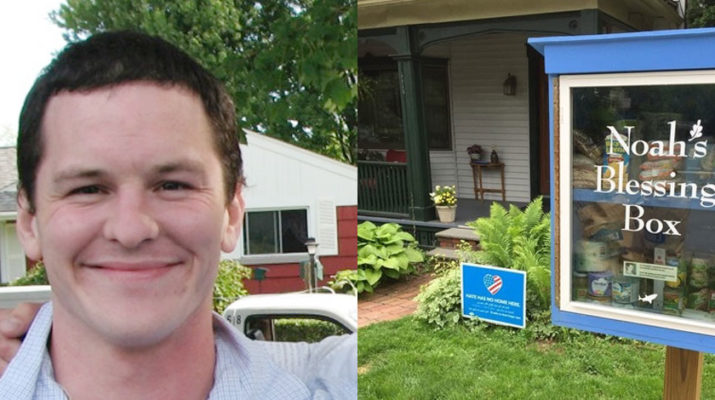 One winter, the thief crept quietly into the tidy old home on Parrish Street.

The residence, which has stood since President Abraham Lincoln’s era, could offer no protection against the intruder.

Nor could the close-knit family — two parents and three children — inside the cozy Canandaigua home.

The thief’s entry was discovered the week of Christmas. Noah Marinelli, the youngest of the three teens, woke his father in the middle of the night to alert him that the safety of their home had been breached.

“Dad,” he said, “I think Michael is using heroin.”

Noah was concerned: his father, Jeff, and mother, Suzanne, shocked. How could one of their sons be using heroin, let alone in the family home, unbeknownst to them?

“I couldn’t believe this s*** was in my house,” Suzanne said.

They knew both boys had experimented with marijuana. But this? Not this.

Michael’s road to heroin use started with pain medication that had been prescribed after a bad car accident. He became hooked on it, and eventually turned to heroin.

Jeff and Suzanne Marinelli talked with Michael. They talked with each other. They threatened and pleaded.

Michael became sober — for periods at a time. In between came arrests and jail time, doctor visits and rehabs.

Michael is currently sober. But Noah, the one concerned for his big brother’s well-being, who first alerted their parents to the problem of heroin, is dead.

Inexplicably, he followed his big brother’s path into the hell of addiction. Only, this time, the thief took more than he had to give.

Three summers ago in 2016, police believed that Noah and his girlfriend, in need of money, stole from a store in Farmington and headed to Rochester to sell the items for cash. Police attempted to stop them and they crashed on Interstate 490.

Noah died at the scene. He was 33. His girlfriend, Danielle, the mother of a young child, died a few days later.

“He was this wonderful, joyous man,” Suzanne said. “And there are no words to discuss the devastation of June 26, 2016.”

They also had to deal with it while their other son was locked up. Michael learned of his brother’s death while he was in jail on charges related to his addiction, but he was able to attend Noah’s funeral.

Michael has had to deal with the loss of his brother while knowing he was the one who first brought heroin into the house. He’s also the one who shot up Noah for the first time.

“Addiction takes who it wants,” Suzanne said. “Certainly, we never thought this was something we’d have to deal with as parents.”

As Michael’s addiction worsened, and his parents later learned Noah was using, they navigated a web of rehab facilities, detox centers, doctors, clinics and health insurance companies — all while holding down jobs, paying bills, managing life.

“We walked down every avenue we could find to maybe get some help for them,” Jeff said.

As they waded through their grief, they talked of Noah. It was not uncommon to find him playing guitar on the porch, the same porch where, as a boy, he was given an old TV to take apart to keep him busy. He enjoyed doing projects around the house with his dad. He had friends. He was a handsome young man who was normal in so many ways.

One day, while visiting their daughter Rachel, who lives in Rochester, Suzanne spotted a small structure in front of a church. Rachel told her it was a blessing box in which people would leave donations of food and clothing for those in need.

In 2017, Noah’s Blessing Box was born. The wooden structure adorns their front yard and is open to all. Inside, they put personal care items and non-perishable food: anything to help someone going through hard times.

The blessing box has evolved. When the weather gets cold, they hang scarves and mittens on a tree in their yard. They’ve put together backpacks with school supplies for kids in the fall. Given out bicycles. Meals during the holidays. Gifts at Christmas.

“We did not expect this,” Suzanne said. “We just thought, ‘Well, we’ll maybe help a couple people out.”

While the couple created the box, the community has kept it full. The Marinellis find everything from a few coins left behind to cases of food and large monetary donations.

“I had a gentleman in Georgia send us a check,” Jeff said.

Many of the donations come with stories. People who knew Noah reminisce with his parents. People who didn’t say they’ve been touched by his story.

The level of generosity does not matter. They’re moved by all of it.

“Those are powerful gifts,” Jeff said.

They’ve also hosted meetings with other parents going through the same issue. Their advice? Call your child’s doctor if you suspect anything. And if they can’t help, call another and another until you find someone who can. Call rehabs until you find one that can take your child. When someone is addicted, it’s nearly impossible for them to advocate for themselves, they said.

They also recommend taking care of yourself. Talk to your faith leader. Go to Al-Anon or Nar-Anon, groups that provide support to loved ones of alcoholics and substance abuse sufferers. Learn as much as you can about the disease and why and how it affects your loved one.

Above all, even in the darkest moments, hang on to hope and compassion, they said.

“No one wakes up in the morning and says, ‘I’m going to do something today that is going to ruin the rest of my life.’” Suzanne said.

It brings the Marinellis comfort to hear talk of their son. It gives them pride to know how many people cared about him and just how much his interactions and relationships with people mattered.

They believe he’d be pleased with what they’ve done. Suzanne recalls how one morning she and Noah stopped at a fast food joint and saw two homeless men.

“Noah came out and said, ‘Can we please buy them breakfast?,” she said. “That was Noah’s heart.”

Noah’s final resting place is on the fireplace in the living room. He’s always with his family now, a family that has grown with the birth of two grandchildren for the Marinellis.

“And if you get both of those things, you’re lucky then, you know?”