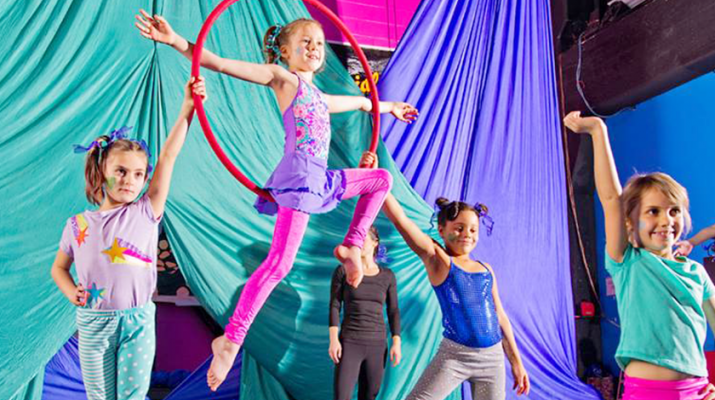 The students and instructors at Aerial Arts of Rochester are working to prepare their annual summer showcase that will highlight performances on aerial silks, lyra (aerial hoop), trapeze and aerial hammock.

A Unique Studio for a Unique Form of Fitness

William and Jennifer Dovidio opened Aerial Arts of Rochester in 2010 hoping to bring an alternative form of fitness to the Rochester community. It was obvious there was interest in having circus arts in the Flower City and they instantly grew a passionate following. Along with dedicated students came interest in performing — leading to summer and winter showcases, themed recitals and the creation of The Up! State Cirque Troupe.

“[Circus arts] are really changing in the 21st century,” William Dovidio said about the future of aerial arts. Both Dovidios have an impressive list of credentials supporting their aerial arts endeavors that include trainings at Sunshine Circus in Florida, ESH Aerial Arts in Massachusetts, Philly Circus Arts in Pennsylvania and New England Center of Circus Arts in Vermont. Their passion and persistence pushed them to create the successful studio that is now Aerial Arts of Rochester as well as its sister studio in Buffalo, Up! Aerial Fitness.

Aerial Arts of Rochester has many workouts available, including session classes utilizing apparatuses such as aerial silks, aerial hammock, lyra (aerial hoop), trapeze and pole. Since many adults live busy lives and cannot commit to weekly, scheduled classes, the studio offers walk-in classes such as bungee dance, aerial yoga, fly barre trapeze as well as many more. They also host a range of kid’s classes as well as group parties for both children and adults.

Those who attend classes have not only seen an improvement in their aerial skills, but also in their confidence level during their time spent at the studio, William Dovidio said. For him, Aerial Arts of Rochester promotes a positive sense of self along with the large assortment of classes available and those who partake in classes often leave feeling uplifted and mentally strengthened.

“It’s a great stress reliever because you have to check your outside world at the door and once inside, you have to focus on what you’re doing,” says Mindy Topel Walsh, a student-turned-instructor with five years aerial experience.

Since many students, and instructors, have gained this newfound sense of confidence, they are diligently preparing performances for the annual summer showcase. The aerialists prepare routines that range from solos to duets to group performances on a variety of circus apparatuses.

“There’s always progress to be made and I strive to make my next performance better than my last,” explains Andrea Morris, a multi-talented aerialist who has been involved with Aerial Arts of Rochester for three and a half years. “It’s a workout for the body and mind.” Morris, along with many other high-level students, has performed in numerous showcases over the years as well as taken part in public performances and fundraisers.