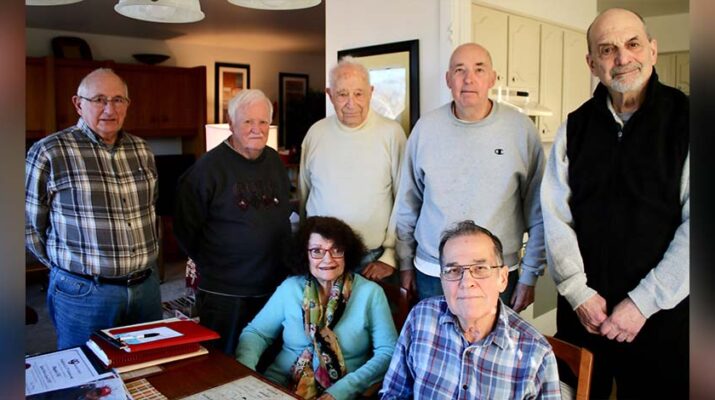 Picture what might be the darkest night of your life.

You’re lying in a hospital bed, already connected to IVs, waiting for heart surgery first thing the next morning. Everyone has left your room to go home and get some sleep.

Alone with your thoughts, you’re doing your best not to panic. You’re wondering if you’re ever going to see tomorrow. If you’ll ever blow out any more birthday candles. If you’ll feel your spouse’s hand in yours. The faces of the people you love move by as you close your eyes.

Someone is tapping lightly on your door.

What now? It’s someone you haven’t met before. A man your age, give or take a few years. Warm smile. Respectful attitude.

The visitor is from a Mended Hearts and he knows what you’re going through.

“We see people pre-operation and give them an idea what to expect,” said Jeff Ordan, 74, of Rochester. “I know they’re afraid. I tell them I had my heart surgery in 2008 and I’m still here. I tell them, ‘You’ll get through it. Yeah, the first couple of weeks are going to be uncomfortable, but after that you’re going to feel better every day.’ Most patients are thankful for the visit.”

Patients may get a visit from a Mended Hearts volunteer after their surgery. Ordan has been there, too.

“Depending on how long ago the surgery was before my visit, they may still be in pain,” he said. “The doctors are basically cutting you open for a bypass. We try to calm them. We tell them they’re going to feel better. It doesn’t take as long as they might think. I let them know I’m giving them an example of myself. I was up and around fairly quickly. I was home in less than a week. I tell them to listen to what their surgeon is telling them to do. Also, when they get home, try to change their eating habits a little bit and exercise at rehab centers.”

Gene Binder, 87, of Farmington is another Mended Hearts visitor who calls on cardiac patients at Rochester General and Strong Memorial hospitals.

“Patients have said they found it quite reassuring to hear me mention I’ve really had quite an active life after heart surgery,” he said. “It was one of the best decisions I’ve made to do the surgery. I share that with them. It puts them in a better frame of mind to feel they’re going to recover from the surgery and actually be better off than they were before. I know I was. Almost everyone in this room is.”

Binder was speaking, talking about his experience, during a brief Mended Hearts, Rochester Chapter meeting. Everyone in the room was a heart patient.

“I’ve run into people who were concerned the surgery was going to kill them. Oh, absolutely, I was one of them. I knew it was a very invasive procedure. I’d read about it. I was wondering if I should go through it. And there are probably people who don’t,” he said.

He said Mended Hearts likes to talk to cardiac patients before they have surgery and they ask cardiologists to pass along the Mended Hearts contact information so patients can start the process.

Those pre-surgery talks can put a lot of patients’ minds at ease, the group feels.

Mended Hearts began in 1951 when Boston cardiac surgeon Dwight Harkness realized that his patients’ success stories, verbalized by them one-on-one with others, could comfort and support the next generation of heart patients. Mended Hearts slowly went national and was established in Rochester in 1966, with a satellite chapter in Canandaigua and a Mended Little Hearts chapter for kids in Rochester.

The group meets monthly on the third Monday at the Jewish Community Center, 1200 Edgewood Ave., in Rochester and alternately at the Webster Columbus Center on 70 Barrett Drive. Meetings begin again in January. Canandaigua meetings are on the second Thursday of the month at Thompson Hospital, Continuing Care Center (RG&E Room), 350 Parrish St.

It’s in those meetings that the effect of Mended Hearts deepens. Program director Marlene Adams of Rochester presses for good speakers, doctors, cardiologists, rehab specialists and motivational experts and provides time for talking and schmoozing.

She heard about Mended Hearts and joined it to improve the chapter.

After a quadruple bypass, she found herself in rehab, and frustrated.

“Everybody was so busy in rehab. I wanted to talk to people, but rehab is not a social situation,” she said. “I asked one of the nurses, ‘Don’t you have people who I can talk to?’”

She was directed to a Mended Hearts flyer on the wall.

“I called the number and didn’t hear from anybody for three months,” she said. “Finally, someone called me. I started going to the meetings.”

And, she ended up as one of the Strong Memorial visitors.

“People get better when people are being visited,” she said. “You make people better by just showing up. When I visited people, I know I made some people very, very happy. Some people were in tears.”

The information people can gather from the experts at Mended Hearts meetings can be life-changing.

Bruce Newton, 70, of Scottsville discovered in 2009 that he’d had a silent heart attack, the feared “widowmaker,” and a third of his heart was comprised of dead tissue. His doctors used medication to treat him and things slowly improved, but Newton felt something better had to be available.

“In 2010, I got involved with Mended Hearts,” he said. “I was looking for something because I was concerned: what was my life going to be like? I Googled ‘heart support groups in Rochester NY.’ There weren’t too many of them. Mended Hearts came up; I decided I needed to go to find out what my life was going to be like.”

“My mother had heart surgery and died on the operating table. Probably the best thing I ever did was going to that first meeting,” he added. “I made a decision I needed to be in this group. The speakers they had and the things they were doing were very informative. I didn’t know much about heart disease. It was a scary thing for me. I grew up in a family of 14. I’d been married a while. I had three children and a couple of grandchildren. Life was important to me. I needed to learn and then I started learning, what would help me be healthier and what would help me to survive as long as I could?”

After a year he got a new cardiologist and had a triple bypass. That was 10 years ago.

Mended Hearts has staying power as members learn the latest treatments and medications and wisdom that can improve their lives.

“It made me more aware of how to behave and eat and take care of myself,” said Barney Quinlan, 83, of Webster. “The openness of the meetings and all the latest information…we would have doctors come and give us all the procedures and what was the latest. From 2004 to today it’s just unbelievable, the technology has just gone so fast.”

Quinlan is aware of something that was a descriptor of someone who had a heart attack in the 1960s, they were “cardiac cripples,” they couldn’t do anything physical.

“It meant their activities were cut right down. That was never discussed (in Mended Hearts meetings) because with all this new technology and medications, it just doesn’t happen,” he said.

He had a five-artery bypass because three of his arteries were blocked.

“I did not have a heart attack,” he said. “The doctor said I should have. He was worried about me just going in the gurney up to the operating floor. Obviously, everything went well. That was 18 years ago.”

Mended Hearts of Rochester is now looking for new members, people who may be looking at heart surgery, or those who have had it and want to continue living a good life.

Bruce Rychwalski, 72, of Rochester, a well-known runner, made a presentation to the group on fitness and is now the chapter treasurer and the captain of the 25-member Lionhearted Heart Walk Team.

Marty Levin, 74, of Hilton, didn’t feel well, so his nurse wife took him to the hospital. The doctor told him he was having a massive heart attack. A triple bypass followed and he ended up joining the chapter and was anointed the technical director, in charge of the website, www.mendedheartsrochester.com

“We’re here to get people acclimated to going through their bypass or whatever heart problems they have and to make them feel comfortable coming to meetings and learning more about the latest procedures,” said Quinlan.

“And, we’ve been doing it in Rochester for 55 years,” added Davis.