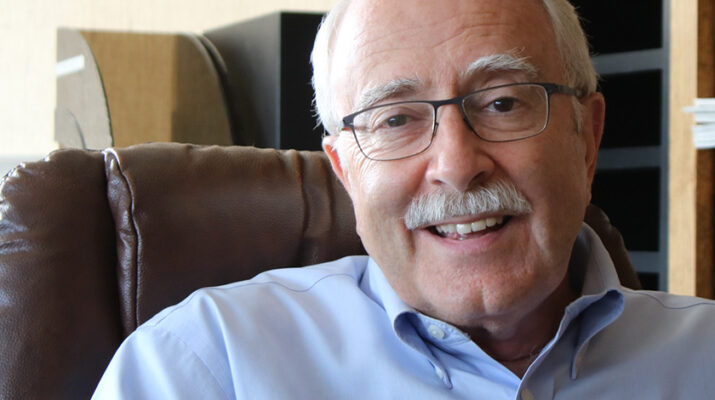 Edward Tanner‘s family ran a small retail lumber yard in Broadalbin, near Albany. He worked there as a teenager through college vacations and med school vacations.

“Throughout my medical practice career, I kept thinking about what impressed me with working with my father. When people came into the hardware store, the lumber yard, he was always trying to solve their problem for them. It was never, ‘How much can I sell you?’ It was never about sales,” he recalled. “His approach was, ‘What do you need and can I instruct you in how to do it yourself? Or do you need to hire a contractor?’”

Tanner said he “kind of absorbed that.”

“I don’t think I appreciated that’s how I was thinking in my early years as a doctor. As time went on, I used to joke, ‘Everything I needed to know in orthopedics I learned in a lumber yard.’”

Tanner, 73, retired in August from his 25-year position as head of orthopedics at Rochester General Hospital and 45 years as a doctor.

He and his wife, Elizabeth, a former orthopaedic nurse and nurse manager, live in Brighton and are ready to enjoy retirement.

“We’ll travel. I love to ski, downhill and cross-country in the winter. Spring, summer, fall it’s biking, hiking, canoeing and kayaking,” he said. “I hope to get back to my hobbies — gardening, photography and woodworking.”

Sitting in his office on a summer’s morning, he’s no longer surrounded by the mementoes you might expect. It’s been pretty much cleaned out. He has a warm smile; his speech measured and reassuring. He provides information, then asks questions. You have a problem; he wants to help. You want to share something? He’ll listen.

Tanner started his career at the University of Rochester in the ‘60s on a work-study program, toiling in the cafeteria and the engineering library. His favorite long-term job was working in the hematology lab.

“I joked that at 18 I was doing hematological research,” he explained. “But what I really did was clean out the lab and sterilize the test tubes.”

Encouragement from the director of the lab for four years bore fruit. Tanner added biology and biochem courses to his engineering matriculation and applied for med school, also at the UofR. With his new M.D., he applied for an orthopedics residency that had him serving patients at Strong, Highland, Genesee and Rochester General hospitals.

In 1981, he established his practice as part of the team at Rochester General.

Tanner has a well-earned perspective on the practice of orthopedics and medicine in general today, versus when he started 45 years ago.

“The knowledge base has expanded an incredible amount,” he said. “Going back to my residency, general surgery was kind of the ultimate. Everybody was headed toward general surgery. Now it’s expanded so that there are several sub-specialties. Most people go through their residency training and then do a year fellowship in spine, pediatrics, sports medicine, joint replacement or hand surgery.”

“It has become much more surgically oriented, particularly going through the residency. Much more emphasis is on the surgical side,” he added. “Nonsurgical patients are frequently handled by other specialties like rheumatology and physical medicine. Family practice doctors also see a lot of the nonsurgery things to diagnose and treat.”

Today there’s more and more emphasis on cost in the medical field, shortening up hospital stays and moving things ahead quickly, he noted.

“As an example, when I was starting in practice, when you had a total knee or hip replacement, we would have kept you in bed for a few days to rest after your surgery. You’d then get up and be instructed by physical therapy. You’d frequently be two or three weeks in the hospital,” he explained. “Now, there’s a lot of emphasis on outpatient or one-night stays. We’re finding that getting people up and weight-bearing shortly after the surgery is better for your overall health. That’s changed dramatically.”

“Another example is that we’d treat people with fractures for a long period of time in traction or in casts. Today, there are all kinds of specialty rods and plates and screws that can be used to treat fractures surgically and have people moving, functioning and using their joints right away,” he continued.

To a patient, bedside manner and trust in your doctor matter a lot. Tanner believes in developing that relationship.

“I’m happiest with the personal interactions,” he said. “With all the technology, being in an exam room and sitting down, talking with people one-on-one is so important. Someone coming in with knee arthritis, you don’t jump right to surgery. There are more simple things that can be done to resolve the problem. When those don’t work, you do the actual technical piece.

“Orthopedics and particularly joint replacement is highly successful. It does really change your life. A surgeon takes your appendix out, has just saved your life. Your life is back to normal. With knee arthritis, it gradually limits you more and more. With knee replacement, you suddenly have your life back again—it makes a quantum improvement in things. It’s great to be able to do that for people.”

In his practice, he would see 25 people a day, personally.

Once in the exam room, “We’ll focus on your knee or the Yankees or our grandkids. People share their personal lives. They tend to open up in a doctor’s office differently than when you’re out buying a new car or even getting your haircut,” he said. “I was always impressed that people opened up and shared things with me.”

“I couldn’t imagine anything better. If I could fix anything, I wish there were something to make people better quickly. Everything in ortho takes months and months,” he said.

Computers are a love-hate relationship. He loves the ease of getting all kinds of information on his patients, especially X-rays. But with more information comes more work for doctors, who are often forced to take that work home after a normal 11- or 12-hour day. For Tanner, who loves the interaction with his patients, the computer is an inanimate object that demands and draws his attention away from patients.

He also loves being a part of a team in his office, in the operating room and with his patients; remembering how his dad treated employees and partner merchants in the lumber yard.

“I’m not a superstar,” he said. “I love to interact with the whole team.”