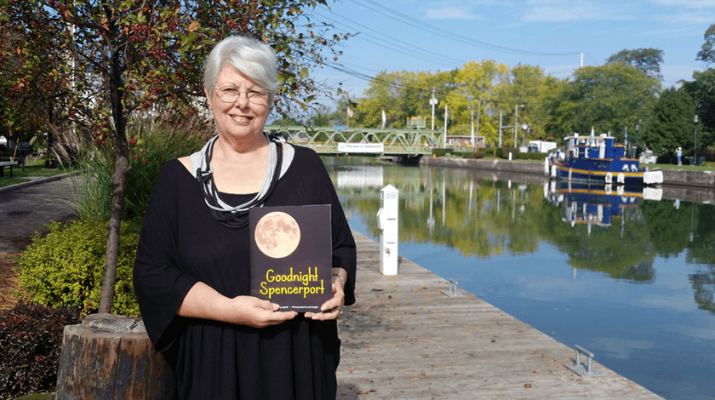 Terry Werth, 71, of Spencerport, fought hard against the stage three triple negative breast cancer she was diagnosed with in 2009.

But in 2011 when the physical battle she endured was over, she knew that the deep emotional scars her illness left behind were only just beginning to heal.

Werth retired in 2004 from her position as public information specialist at West Irondequoit Central School District. She went on to volunteer at Journey Home in Greece as well as volunteer as a Reach Out Radio reader at WXXI.

Unfortunately, her volunteering efforts had to be put on hold when she got her diagnosis. Her struggle with breast cancer was a life-changing experience, and the best way she could cope with the stress of it all was to write about it.

Those early poems, essays and letters were a balm to her on the days she felt very alone even amidst the kindness and love of those closest to her.

“At the end of the day, it is just you and your pillow; you feel very alone,” said Werth. “It’s like nobody really knows what’s in your head and in your heart and how scared you are and how much of an uphill climb it is not to give into the fear and depression and the anxiety.”

After the treatments, her life as a survivor began and she felt like a different person.

“Survivorship changes you,” she said. “It’s like background music — it’s never in that sharp focus in front of your face like it was in the beginning, but it is never really gone either.”

So she kept writing and processing and soon the essays, the poems, and the letters were numerous enough to compile into a book. In 2011, Werth published “Pink on Pink: Writing My Way Through Breast Cancer” (Creative Energies 2011).

In 2013, Elizabeth Haskins of Wilmington, Ohio, set one of the poems in Werth’s book to music.

“It just spoke to me,” recalled Haskins. She expressed the truth so beautifully.”

Muse Cincinnati Women’s Choir performed the song that year under the direction of Catherine Roma, also of Wilmington College.

The chamber choir, Madrigalia, performed the song again in March of 2018 in Rochester during the “Singing our Losses, Singing Our Strength” concert.

Hearing both choirs sing the song was extremely moving for Werth, and she noted that it was a distinct honor that these two well-known choirs performed it.

“It was one of the most thrilling things for me, to hear my words sung by the Cincinnati Women’s Choir. They’re world class, and I think Rochester Madrigalia is also world class,” she noted.

Werth’s writing efforts continued, and in 2017 she published “Goodnight Spencerport” (Werth 2017) a children’s book set in the west side village of Spencerport.

Because she knew the village and its landmarks so well, the text came quickly to her. What took a little more time and research was the compilation of the extensive glossary in the back of the book.

The glossary consists of four pages of detailed historic information about the places shown in the story, including instructions on how to do further research online.

The final piece to the puzzle was the addition of colorful photos of the village. After seeing a striking photo of a full moon over the canal in Spencerport, she sought out the photographer. It turned out that educator and photographer Joe Pompili not only lived in the village, but he lived just down the street from Werth.

Werth was excited to collaborate with Pompili, who took more than 300 photos for the project.

“He had the same love of the community that I did. I felt like it was a great match,” she said.

Phyllis Leathersich of Spencerport was thrilled when Werth released “Goodnight Spencerport.” She purchased a copy for each one of her seven children, “because they all have children and I thought it would be a nice way for them to teach their kids about where they came from. I was really excited about that.”

In 2018, Werth read a news story about another Spencerport woman, Maria Delgado Sutton, who was putting together care packages for residents of Puerto Rico affected by Hurricane Maria.

Werth was eager to help Delgado with the “One Box At a Time” project and donated copies of her books for the care packages. But her assistance didn’t end there. Werth helped Delgado organize a fundraiser at their local library. The event raised enough funds to send 64 boxes directly to residents in Puerto Rico.

Werth also accompanied Delgado on a trip there last December. Delgado was impressed with Werth’s determination and willingness to give of herself.

“Terry knew that this was not going to be a pleasure trip to Puerto Rico, we would have to foot the bill for our plane fare, baggage, and expenses. This trip was made with a mission in mind,” Delgado said.

“We were able to pack four suitcases full of food and school supplies. It was her idea to reach out to Jet Blue Airlines to request a waiver for our suitcases, which they granted,” she added. “Terry is always busy doing ‘something’ and always for the benefit of others. Terry is so thoughtful; she is genuine in wanting to know what others’ concerns are and does her ultimate best to help them. She has a big heart and gives from her soul.”

Werth is also a certified funeral celebrant and ordained wedding officiant. She says officiant work is very creative and refers to it as “just another fulfillment of my original dreams.”

When asked what project she plans to tackle next, she said that she is working on the “Village Gateway Project” in Spencerport. Project organizers are seeking to remove two deteriorating CSX railroad abutments in the village. “It’s an effort to aesthetically balance the entry from the south end of the business district with all the improvements made over the years on the north end,” she said.

She continues to write and hopes to publish more work soon. To learn about Werth and her books, visit goodnightspencerport.com and teresawerth.com.