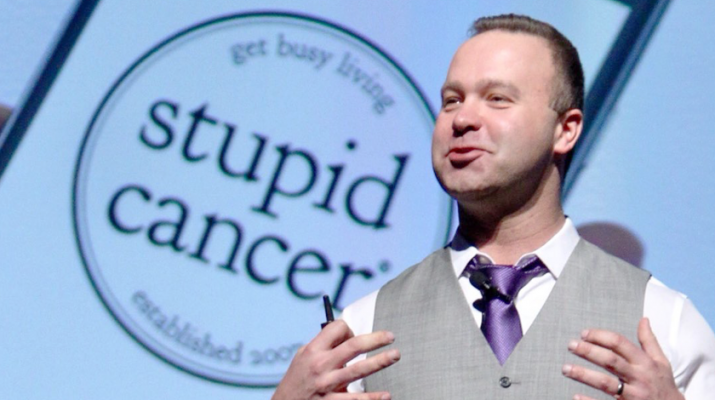 Dave Fuehrer was just 25 when testicular cancer came storming into his life, assaulting his body, wreaking havoc on his emotions, and attacking his fertility.

The experience was isolating. He quickly tried to put it behind him. But he was forced to confront the myriad of emotions and physical changes cancer came with when he was diagnosed a second time five years later.

He sought out a support group but found the experience left him wanting more.

“Talking about really vulnerable things in front of strangers is a really hard thing,” he said.” I found myself still holding back because I didn’t want to make somebody else too uncomfortable, or they were dealing with something differently.”

The Rochester native and Rochester Institute of Technology graduate was living in Michigan at the time and working as a research consultant. Despite his education and background, he found himself so overwhelmed by his experience that he couldn’t find information he was seeking, or couldn’t navigate what he found.

“None of us expect cancer or expect to lose our fertility or expect to be in that kind of pain or expect memory loss,” Fuehrer said. Grappling with cancer is “the opposite of what we think our life is going to be.”

He returned to Rochester after his father died from bladder cancer. In the wake of his health challenges, he knew he wanted to have a career with a purpose. He connected with Stupid Cancer, an international nonprofit organization for young adults with the disease.

“It changed my life,” Fuehrer, 41, said, noting that he finally confronted all of the issues with which his cancer battles had left him.

Fuehrer assembled a team of others directly affected by cancer, either as patients or as caregivers. They spent the last five years developing a mobile application for cancer patients to connect with each other.

“You feel so out of control and being around people you can talk openly and share ideas — that can put control back in your life.”

In 2016, Fuehrer founded GRYT (pronounced “grit”) Health, a digital health start-up headquartered in Rochester, which donates 10 percent of its revenue to Stupid Cancer.

The Stupid Cancer App launched last fall. It is used in all 50 states and across 65 countries. The application won best mobile app in the charity/nonprofit category of the 2018 Appy Awards, which were presented last month in New York City.

Since last fall, the app has hosted over 500,000 interactions between people, according to Fuehrer.

Ellis Emerson, 32, is one of those people. The Texas resident was diagnosed with stage 3 melanoma last fall. While she said she has a great support system, the Stupid Cancer App has given her an “invaluable” experience. Emerson has particularly grown close to three people she met through the app. The four recently met up and got matching tattoos.

“We are definitely connecting people and we are definitely providing education and information,” he said, “but my greatest hope is that it empowers people to know that they don’t have to hide what they’re going through, and that there are all kinds of different ways to live on their terms.”

Besides fostering connections, Fuehrer envisions the app as a resource for helpful information. When a user fills out some profile information, the app administrators will send information on topics that are applicable to his or her age group and diagnosis.

“We can actually help educate people based on their specific situation,” he said.

Most importantly, the app allows people to use it how they want to by meeting them wherever they are in their cancer journey, Fuerher said. The user can be as social and open as he or she wants. And that may change as his or her needs fluctuate.

“Knowing how much I was really alone and felt broken for as long as I did, to have people tell me [this has changed their lives] has made me feel like what I went through now has a purpose,” he said.