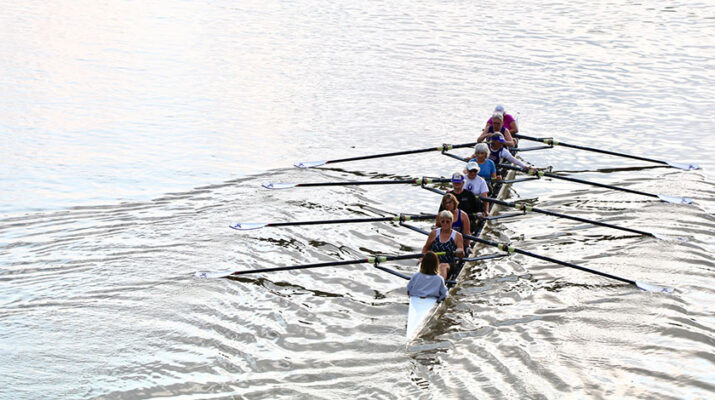 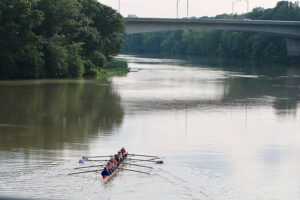 In the silence of your body, the war goes on.

And when you find it, the reward is like warm water flowing over you. A surge of energy can now slowly build.

Cancer claims so much of a person. You end up fighting for your soul.

In the midst of the struggle to destroy the cancer, you need help, all kinds of help. The effort to reclaim you, to marshal your strength and courage, is an effort for every waking moment.

A respite would be wonderful. Unbidden and genuine support would be gratefully consuming.

A path to the road back to you would be welcome.

But where to start?

Roxanne Zambito, from Hamlin, is a three-time cancer survivor. She rows with the Naiades Oncology Rowing, along with other cancer survivors, those in active treatment and supporters.

That was 12 years ago. She helped found the Naiades (female spirits who watch over waterways) in 2009.

“Rowing is doing something that you never thought you could do. Now I’m coming back again from my last cancer. On the boat, it is peace, it really is.”

Zambito – Roxie is her nickname – confesses that she can be a little bossy and uptight.

“Being in this group is wonderful. They’re a wonderful bunch of women who support one another no matter what. We have a good time, we laugh about ourselves. It’s just peaceful for me,” she added.

When you get in an eight-person crew boat, grasp your oar and start to row, you have one thing on your mind: the precision required to keep the boat going smoothly. That concentration can remove a lot of that day’s issues and stresses.

Nancy Harter of Greece was another woman who got the club started. She has survived breast cancer twice.

“Support groups weren’t for me,” she said. “I tried and tried, but they didn’t work for me. I didn’t know that as soon as I got into this boat, I was hooked on the very first day. We come here to get our minds off what cancer has done and taken away from us. The club made me more physical again. It cleared my mind and helped me enjoy life more. It has improved my emotional well-being, my strength and endurance — what cancer took from me.”

Being a Naiades rower has given Harter a podium and a role she didn’t expect.

The club has three rowing sessions a year — spring, summer and fall — beginning in April and extending into mid-October. The women row twice a week from the Genesee Waterways Center off Elmwood Avenue in Rochester, bringing out their boats around 5:45 p.m., on the water around 6 p.m., rowing for 90 minutes and done by 8 p.m.

“After these hot days, everyone’s ready to go home and take a shower or get in the pool,” said Sheila Wassink of Chili, a supporter.

Most of the club members have had cancer, Wassink explained, but supporters — daughters, quite often — are needed to fill a seat on the boat sometimes. In the winter months, the club holds training sessions at the Pittsford Tanks, where rowers can actually row against a water stream or at the GWC, where there are “erg” (rowing) machines. The Naiades also host learn-to-row classes, graduating four or five new oarswomen each session.

Rose O’Keefe of Rochester, a cancer survivor, is another pioneer who helped start the club. She read an article about rowing being offered at Camp Good Days in 2008 “and it was free. I thought, ‘That’s great! I’d love to learn that and free is even better,’” she said.

“That program ended, but the group did rowing indoors over the winter at the Pittsford Tanks. I actually started in the Pittsford Tanks in the winter of 2008 and joined Naiades in the spring of 2009,” she explained. “I had the reputation that spring of having the greenest face on the water. Because rowing in the tanks is stable, but when you get on the river, it’s a completely different experience. It took me a while to get used to it.”

O’Keefe said rowing with this group is incredibly special.

“I’ve learned every one of us is willing to learn something new and different. It takes effort and practice, but the teamwork and synergy of it, oh, it’s so priceless. It keeps me coming back,” she said.

Laurie VanDerMeid of Irondequoit, a cancer survivor, also read about the club and the rowers.

“Nancy Harter was in that article,” she said. “I was about a year and a half out of my treatment and I thought that was such a cool thing. On a whim, I sent my name in. I never thought I would follow through. But I got a personal phone call and just started rowing.”

“There’s a sense of community and pride. We’re all working together,” VanDerMeid added. “We don’t focus on our cancer at all; we focus on rowing together, synchronous, so that we can have a nice, steady, fast boat out on the water. Rowing is very difficult, much harder than it looks.”

“I had never done any rowing — it’s something I never thought of. I found out it takes practice, patience with yourself and fellow rowers. Everyone sort of embraces one another and helps each other,” she said. “Some of us are not strong, some of us have restrictions; we all take the part we need to get it done.

“This club is a very good place (for cancer survivors). Some of our new rowers are not comfortable for a while. They might just ride along in the motor launch. Some have restrictions — they can’t lift the boat above their heads. We’ll lift it for them. Some people need help getting in or out of the boat, based on age or how physically well they are. We kind of learn who those people are and what they need, and we all work to help each other out.”

VanDerMeid works on the club’s Facebook and Instagram posting, “and our presence in the community. We do the Wilmot Warrior Walk. We do symposiums. We do the Breast Cancer Coalition Walk and Run. We plan breakfasts; all the things we can possibly do socially to keep us together. This year we’ve seen a good uptick in membership.”

The club’s main fundraisers, Wassink pointed out, are a golf tournament at the Lima Country Club on Aug. 22 and a naming ceremony that occurred in July, when the names of loved ones lost to the disease were painted on boats and oars.

“They are the spirits who row with us every time we’re on the water,” according to the Naiades brochure.

If you’re thinking about other things and your head’s not in the boat, your boat’s going to be offset, you’ll miss your strokes.

“Some people are going through treatments, some unfortunately are dealing with recurrences,” she said. “Off the water we support each other just like we do on the water.”

For anyone who’s just a little bit curious about grabbing an oar, Lewis’ advice is simple: “Come out and try it. You won’t know this is for you or not until you get in the boat. It’s something you have to experience before you know.”

Wassink summed up rowing on the Genesee (and the canal) with the Naiades: “It’s so relaxing. It takes their minds off their real problems and issues. It’s the camaraderie: people are from all different jobs and families, but their common health issue — that’s what they all have in common. They talk about how they handle this or that. It’s a real support group for everyone. They’re strong. It’s so peaceful on the river. Sometimes we head for the Ford Street bridge, where we see downtown Rochester and all the lights. It’s just so calming. Just being together relieves some stress. Everyone is so helpful.”