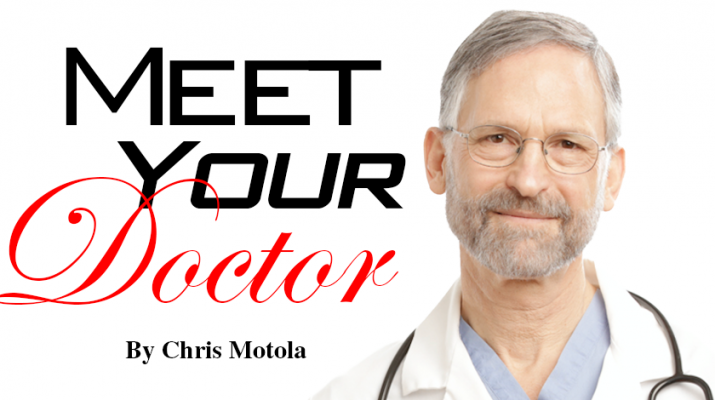 Q: How did you get the nickname Dr. Veggie?

A: Many years back, when everything was dial-up modems and AOL, I had to pick a screen name, and I went with Dr. Veggie. Then every time something new came along, I grabbed the name. So I’m Dr. Veggie on Twitter, although I’ve never really used it. It kind of became my thing.

Q: How long have you been on a vegan diet?

A: When we made the change back in 1991, I was chief of radiology at Thompson Hospital in Canandaigua. I think “vegan” has an interesting connotation and can kind of scare people away. Perhaps it’s just the history of it, but it’s kind of the “v-word.” We kind of made the change as a family after we read Dean Ornish’s book on reversing heart disease. He’s kind of a pioneer in this field. He was the first person who not only demonstrated that you could use diet and lifestyle to reverse heart disease, but that you could reverse heart disease at all.

Q: I’m not sure it’s conventional wisdom even now.

A: When I was in medical school, I had this image in my head of plaques being made of concrete, that they weren’t going anywhere. But in fact that’s not true. Plaques can improve and some can even go away completely. Drug companies will tell you they can do that with medications, but it turns out you can do that with lifestyle changes. Diet is the most important thing, but also physical activity, getting enough sleep. It’s returning the locus of control back to the patient. We’re looking at giving patients the tools.

Q: I’ve heard differing descriptions of what plaque is over the years. How would you describe it?

A: Think of it as inflammation. Young plaques are kind of like pimples under the wall of the artery. Basically it’s the body reacting to an inflammatory process. We think we know what the cause is — processed foods, diets high in animal products — but honestly it’s not that important. What we can do is look around the world at blue zones, these are regions with high life expectancies, and what their common denominators are. They all have diets that are very high in plant matter, especially lots of greens. They also tend to have great social support and get a lot of physical activity, not necessarily from working out, but just generally active. Lots of walking and hills. Low stress life.

Q: You’re recommending a diet based off Caldwell Esselstyn’s work. What does that look like?

A: Esselstyn spring-boarded off the work of Dr. Ornish. He’s a doctor with the Cleveland Clinic. He’s been getting rapid results through diet changes. The Esselstyn diet is basically unprocessed food, no oil, no high-fat plant foods. No nuts, no avocados, no coconut. We don’t necessarily recommend that last part about high-fat plants, we recommend that you do have some nuts in your diet. We still don’t recommend oil, though. So, no olive oil, no canola oil. They’re not as bad for you as other oils, but there’s no evidence that they’re helpful, and they may be harmful.

Q: When you say quick results through diet, how quickly are we talking?

A: Doug Schmidt, one of our facilitators, put together a whole food plant-based jumpstart for schools in the Finger Lakes and 1,300 teachers and administrators signed up for this. It started January 8th and went on for 10 days. And it had amazing results. We had people whose cholesterol and blood sugars drop tremendously. All these things we think of as chronic illnesses can actually clear pretty quickly once people just stop abusing their bodies. It’s very hopeful. We have over 400 million Type 2 diabetics in the world. It’s a huge problem in China and India as well.

Q: Is that a new development?

A: Over the last couple decades as the Western industrialized diet has spread around the world. So it disputes the idea that Americans are somehow genetically predisposed toward diabetes. For kids born after 2000, we’re predicting one-in-three will end up diabetic.

Q: Given that we’re honing in on diet as the cause, why are the rates of diabetes and other diseases still increasing rather than plateauing? Is our diet still getting worse?

A: That’s a great question. I think there’s more junk and empty calories available and in larger packages. Chips, soda, cookies, pizza. And inactivity. The soda companies will tell you it’s just inactivity because they want to sell more soda. Activity is good, but the big change is how much junk they’re getting. But kids are getting less activity now than they used to. Our electronic devices are seductive, but are they actually making us happier?

Q: How do you think this approach compares to medication?

A: I see a lot of optimism. Not to be a downer, but people who get a diabetes diagnosis are often looking at a long, dark tunnel. They’re told it’s a chronic disease, it’s never going to go away. First they want you to try diet, which won’t be effective very long, then oral medication, which won’t work forever, then insulin. It’s the leading cause of renal failure, blindness, amputation, peripheral neuropathy — you’re predicted to have a lifetime of misery. But we have an exit door, and that’s a whole food, plant-based diet and exercise. These things don’t have to be inevitable. Do you know how much of our health care dollars are spent on chronic illnesses related to lifestyle?

Q: The majority, I believe.

A: Yeah. It turns out to be around 85 percent. Look, I love procedures. That’s how I make my living. It’s very satisfying; we get very fast results. And sometimes it’s the best treatment, but most of the time people on my table got there through lifestyle choices they don’t realize are as harmful as they are.