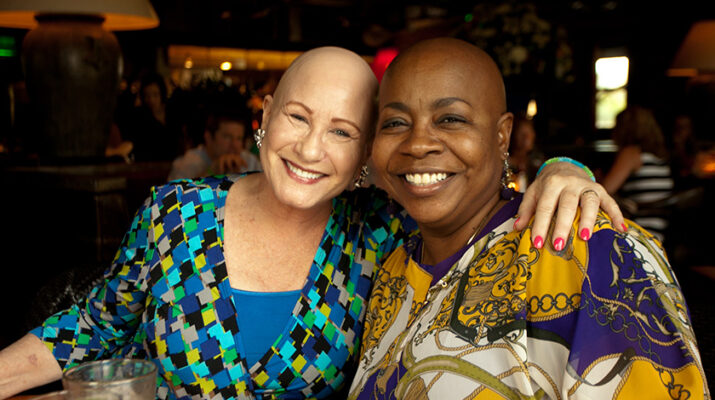 Penfield resident diagnosed 23 years ago with the condition says she will wait to use new medication: “There are a lot of side effects and the results, as with most medications, are not guaranteed”

The FDA announced in June its approval of baricitinib (brand name Oluminant, among others) to treat alopecia areata.

Many people experience hair thinning and loss related to aging or medication.

The autoimmune disease causes sudden, round patches of hair loss all over the head. The patches may grow in size and come and go in different areas over weeks and months. Alopecia totalis means that all of the hair on the patient’s head falls out and alopecia universalis refers to complete bodily hair loss.

About 6.8 million Americans have alopecia areata.

For Sherry Schaefer, a Penfield resident diagnosed 23 years ago, the benefits of baricitinib seem overshadowed by the side effects.

“There are a lot of side effects and the results as with most medications are not guaranteed,” she said. “In fact, based on the clinical trial of 1,200 people, Brett King, dermatologist with Yale School of Medicine, said that the clinical results showed that 20% to 44% of the people regrow a respectable amount of hair. That’s less than 50%.”

At this point, she has decided to wait, but understands if others want to try it, especially people who have other autoimmune conditions baricitinib could simultaneously treat.

Schaefer also acknowledges that her hair loss experience differs from many others. She has parlayed her lifelong experience in hairdressing into fitting custom wigs and hairpieces. She helps women with medical hair loss through Alternative Hair, her salon for her existing customers and her newer business born of the pandemic, My Wig Coach, where she remotely fits wigs and hairpieces for clients.

“I have an extreme comfort level with appearing without wigs,” she said. “For the average person, it’s a more difficult decision to make.”

Along with King, Louis J. Papa, primary care physician at URMC, and Thea Chassin, founder of Westchester County-based Bald Girls Do Lunch, Schaefer appeared on Joan Lunden’s “Second Opinion” show airing on public television stations nationwide March 28. For most of the segment, Schaefer wore one of her many wigs—she models them for her My Wig Coach Facebook page—but removed the wig partway through the segment.

Schaefer finds that taking good care of herself with meditation, rest and modalities of holistic health precedes the times when her hair regrows and stressful periods often precede when her hair falls out. However, it’s not a guarantee.

“For me, it’s very stress-relation,” she said. “When mine first hit, I was almost 40. It started two weeks after a near-death experience. The hair loss started and within three months I was bald.”

Diagnosed in 1997, Chassinfounded Bald Girls Do Lunch, Inc. She decided that baricitinib is not right for her, but she can also understand why many women with alopecia areata feel eager to try the medication.

“The stigma of female hair loss is very big in our culture,” Chassin said. “Women feel less feminine and have concerns about their looks and acceptance should they choose to go without supplemental hair. There’s a lot of worry about feeling normal and feeling they fit in. Our society prizes hair, not just in the US. Hair is a defining part of a woman in most cultures. A lack of hair is a very big deal. It affects self confidence and self-esteem.”

While Chassin appeared on Lunden’s program with her bare pate exposed, she knows that many women do not feel that is the right choice for them.

Beyond appearance, a lack of hair otherwise affects health. Without eyebrows and eyelashes, dust and sweat get into the eyes easier and mucus flows readily out of the nose without hairs to stop it. Chassin said that some people with alopecia areata have painfully brittle fingernails.

She views wearing wigs, scarves, hats, turbans or nothing at all on one’s head as daily choices that women with alopecia areata can make, depending on their situation or preference. Chassin’s hair fell out slowly in patches and in overall thinning for three decades. Eventually, it had fallen out to the point where it “was hair, but not a hairdo,” she said.

She likened her appearance then to Bozo the clown.

“When I shaved it off, I felt like a huge weight had been lifted off me,” she said. “It was truly a step forward to self-acceptance.”

She also felt a powerful sense of control over a situation which had previously spun out of control for years.

For women interested in medication, Chassin views baricitinib as “a game-changer. There are many people who have been waiting for a medication that they can try. Previously, the options were limited. It’s an opportunity for people to try something if they’re not contraindicated. It doesn’t work 100% in everybody, but for those who want to try it, it’s FDA-approved.”