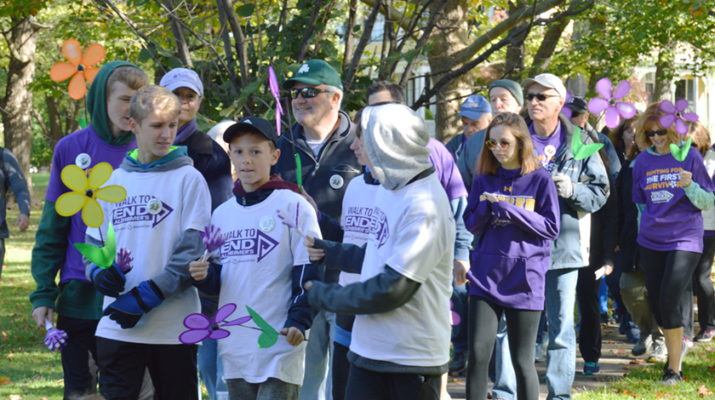 Whether it’s a karate school kicking for the cause, a knitting club making a scarf in a day or a baking company baking for a cure, the events to help find a cure for Alzheimer’s put the “fun” in fundraisers

Does it seem like many organizations and individuals you know are taking part in some sort of fundraiser for the Alzheimer’s Association?

It’s just not an impression. The Rochester chapter of the nonprofit offers numerous opportunities for the community to become involved.

Since dementia is the fifth leading cause of death in the U.S., officials say it’s vital to both fund research and provide help for those affected and their families.

The Alzheimer’s Association represents the largest nonprofit funder of dementia research. Its main three fundraisers are The Longest Day, Walk to End Alzheimer’s and Culinary Clash.

“We want organizations to know that it’s not just a good deed but [sponsoring these events] will reflect in a positive manner on their organization,” said Jeff Collins, senior director of development. “The corporate sponsorships are a big part of the events.”

Patrick Sloan, a Penfield volunteer involved with The Walk, said that participating helps him honor his late mother. He cared for her while she had Alzheimer’s disease. He wants more people to know about the disease that caused his mother to “slowly deteriorate,” he said.

With a background in marketing, Sloan helps in part by promoting The Walk and also by walking himself. He encourages participants in fundraisers to also leverage the power of social media.

He posted a video on social media about his mother that he felt helped raise more funds and awareness.

Julie Demersman, events specialist with the Rochester chapter, said that most participants are like Sloan — caregivers or someone with dementia. But others “see the value behind what we’re doing and our mission,” Demersman said.

The Walk is the world’s largest event to raise awareness and funds for dementia care, support and research. It has been held annually for 30 years. More than 600 communities nationwide participate. The Rochester chapter hosts Walks for the Finger Lakes, Southern Tier and Rochester areas.

“It was amazing,” said Shelby Ascroft, 2019 volunteer and 2020 chairwoman. “It overwhelming in the very best way. We walked because we want to be witnesses to the first survivor. We want caregivers to have somewhere to get support, we want everyone to know that dementia is not a normal part of aging.”

Ascroft hopes that more individuals and businesses will participate next year as volunteers, walkers and donors.

“If we have community support, we can accomplish anything,” she said.

The Longest Day event is named for the long days caregivers put in with their loved ones with dementia and because it used to be held only on the longest day of the year in mid-June. Participants can host a Longest Day event anytime of the year now, and can raise funds doing any activity they choose.

“We want to get the business community more involved,” Demersman said.

Whether it’s a karate school kicking for the cause, a knitting club making a scarf in a day or a baking company baking for a cure, the events put the “fun” in fundraisers. Participating groups can choose to seek pledges and/or sell items to raise funds.

“They can do Casual for a Cause on Fridays or collect bottles and cans or get pin-ups in the office to show support,” Demersman suggested. “It doesn’t have to be anything hard. It can be something you’re already doing.”

“The Culinary Clash is an incredible event,” said Stephanie Johnson, board member of Culinary Clash First. “It is a celebration of food — great tasting food — and who doesn’t enjoy great food? It allows an opportunity for culinary students to showcase their skills, receive great coaching from a variety of chefs and receive many compliments.

“The money raised will enable the Alzheimer’s Association to continue providing incredible support to families living with Alzheimer’s or another dementia and support the research efforts to find a cure for this terrible disease.”

The next event is slated for May 8.

The Alzheimer’s Association Rochester & Finger Lakes Region chapter serves a nine-county region. Its services include 24/7 helpline, care consultations for families affected by dementia, support groups for caregivers, social activities for individuals with dementia and their care partners, and educational programs.

The Alzheimer’s Association’s free multilingual helpline provides reliable information and support to those in need of assistance 24 hours a day, 7 days a week: 1-800-272-3900.

No cure or treatment exists for Alzheimer’s and other forms of dementia, although some medication can slow it down to offer patients and caregivers better quality of life.

The Alzheimer’s Association shares facts on the disease

• Alzheimer’s is the most common type of dementia, which accounts for about 80 percent of dementia cases.

• Dementia refers to a decline in mental ability severe enough to interfere with daily life.

• According to the Alzheimer’s Association 2019 Alzheimer’s Disease Facts and Figures Report, every 65 seconds someone in the United States develops Alzheimer’s dementia.

• More than 400,000 individuals live with Alzheimer’s dementia in New York State. This number does not include individuals with other types of dementia.

• More than 1.6 million New Yorkers provide unpaid care to their loved ones who live with dementia.

Photo: A recent Walk to End Alzheimer’s event in the Finger Lakes. The Walk is one of the most popular events organized by Rochester chapter of Alzheimer’s Association.