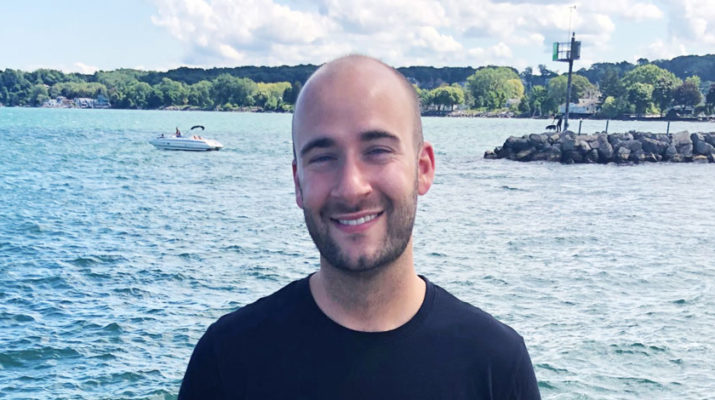 Matt Mallow, an RN, enjoys working in a more one-on-one relationship with patients

Rochester resident Matt Mallow will never forget the kindness shown by nurses while as a high school student he recovered in the hospital from emergency surgery. The experience eventually resulted in his current position as registered nurse at Caring Hearts of Rochester, a home health agency.

“The nurse was really nice and made me feel very comfortable, doing things like making me milkshakes,” Mallow recalled. “I stayed in the hospital for a week or two and they were so caring. I realized I wanted to be there for people too,” he said.

Once he graduated from high school, he enrolled at Genesee Community College in Batavia and graduated as a registered nurse in December, 2013. He realized that he enjoyed working with elderly patients so he worked at a few nursing homes.

“They don’t get a lot of visitors,” Mallow said. “They don’t see a lot of people who want to hear what they have to say. They’re so smart and they can teach you so much and learn so much. If you were in their shoes, you’d want to have others hear what you have to say.”

Eventually, he realized he wanted to care for patients in a more one-on-one relationship. The staffing ratio and demands on nurses in many nursing homes means that staff don’t get as much time with patients as he would want. Sometimes he had 20 patients in his care.

Now he works in home health, where he cares for only one patient at a time. Mallow relishes the opportunity to spend time one on one and really get to know his patients.

Despite this, one of the daily challenges of nursing is the workload.

“You have to be a good time manager,” Mallow said. “You have to watch over the home health aides and supervise them, too, to make sure they’re doing their jobs, too. As long as you’re organized, you can handle it.”

The weather in New York also presents a challenge since he must drive to patients’ homes. He tries to plan visits so that he can make a few stops in the same neighborhood in a row and not crisscross the region.

“I always try to group things together and make a weekly plan of what I need to get done,” Mallow added. “You don’t want to stress yourself out. I try to do the same things certain days.”

He encourages people to think about a career in nursing as long as they have good motives.

“Make sure it’s something you really want to do before you get into it,” Mallow said. “There are people who are in this field who shouldn’t be and just play the part. It’s deeper than just knowing diagnoses and bookwork. It’s about being personable and being there for people.”

Although nurses may make some mistakes while they’re learning, Mallow said that listening to experienced nurses helps new ones perform better every day.

“Don’t look like you think you know everything,” he advised. “Learn from your peers and coworkers.”

He feels very appreciative for the nursing mentors who helped him learn patient care.

Working during a pandemic has been a learning experience for all workers in healthcare. Mallow said that his agency follows all the safety protocol guidelines from the New York Department of Health. Caring Hearts keeps staff updated on the latest information and outfitted with personal protective equipment to curb the spread of the coronavirus among all patients, especially those who may have higher risk factors and reasons for concern.

“We do in-services and find ways around having so many people together for these meetings, like videos and calls,” Mallow said. “It’s tricky but we’re getting through it.”

Mallow likes to stay fit by training to run races and playing hockey in a summer league. He also enjoys listening to music.