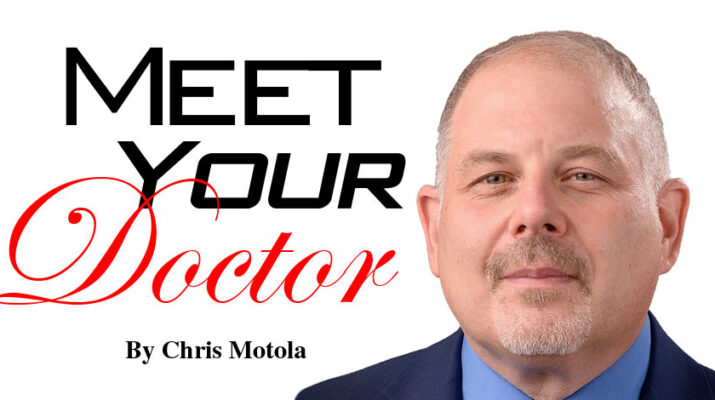 Q: What kinds of conditions does a gastroenterologist see?

A: We cover digestive issues and liver issues. So, starting from the top down, we cover esophageal reflux, problems swallowing, abdominal pain, change in bowel movements, blood in the stool, any combination of symptoms that lead to weight loss, changes in appetite. For liver, changes in liver enzymes. From the screening aspects, we do colonoscopies as well. So we do both diagnostic and screening services.

Q: What are the most common ones you see?

A: It’s a smattering of things, but the most common are probably reflux-related issues, irritable bowel syndrome (IBS), different types of anemia, most commonly iron-deficiency related, blood in the stool, problem swallowing.

Q: You deal with a very big and complex bodily system. What tends to cause issues within it?

A: It is. When you look at patients who have changes in their bowel movements, we try to zero in on cause and effect. We’ll make sure they’ve had a recent colonoscopy to make sure there’re no structural lesions. It all depends on the context. If there’s an associated issue with regard to the symptoms, we target the symptoms. If someone says they’ve had diarrhea for three months and have blood in their stool, we may take a stool culture. Colonoscopy is usually the gold standard there. On the other end, if someone has heartburn and regurgitation issues, we’ll do an endoscopy, go through their history and direct them accordingly with regard to health modifications and anti-reflux measures, and then we might even put them on something like Prilosec or another proton pump inhibitor, and then look at what’s going on structurally with the endoscopy. We target the symptoms, we look at the labs, we do a physical and the procedures if we need to.

Q: Does your practice involve any surgery?

A: It’s not considered surgery — well, maybe at some levels colonoscopy might be, but there’s no open stuff.

Q: Do we understand what causes IBS at this point?

A: We don’t know the exact definitives, but studies point to a brain-gut interaction and a connection to the serotonin family of receptors. It’s not just a matter of being stressed out — there are chemical factors. Historically what they did was they took a rectosigmoid balloon and inflated it inside both normal patients and patients with IBS. The normal patients didn’t feel much, the IBS patients nearly jumped off the table. There’s a visceral hypersensitivity present in IBS patients, which we believe is related to a brain-gut interaction. The exact mechanism isn’t necessarily well-ironed out for each patient, but it’s a multifactorial process.

Q: Is it too far to say there’s a psychosomatic component to it?

A: We prefer to say there’s a brain-gut interaction. They once did this study that you probably could not do today, where they took this med student and they measured what’s called the amplitude of the colonic contraction. They measured the baseline of the colonic contraction on the student, which appeared to be normal. Then they did a biopsy and told the student that he had a cancer when he didn’t. Then they re-did the contraction test and it was off the charts. Then they told him everything was fine and his readings returned to normal. So there definitely is a brain interaction there, but I don’t want people to think it’s all in their head either. Stress and anxiety can definitely play a big factor in some patients, but I don’t think it’s in every patient. But there is a brain-gut interaction, so we try to look at the wiring between the brain, the gut and the autonomic nervous system.

Q: Another big illness associated with the gastrointestinal system is Crohn’s disease. It’s a systemic autoimmune disease, but why does it seem to cause such problems in the intestines?

A: Crohn’s often affects the colon first, but it can affect other organs like the eyes, joints and skin. It’s an autoimmune condition, but sometimes in medicine when a disease doesn’t have an etiology, we name it after a patient or physician. I think that kind of condition is definitely autoimmune, but we don’t know why it primarily affects the colon and small bowel. It’s a minority of patients who experience the extra-intestinal manifestations.

Q: With as large and complex a system as you’re dealing with, how broad does your knowledge base need to be compared to other specialties?

A: It’s exciting and interesting. There’s a lot I can do without relying on other specialties. You can do some somewhat surgical things, you can investigate symptoms by yourself, order tests. So we can do a lot of good ourselves.