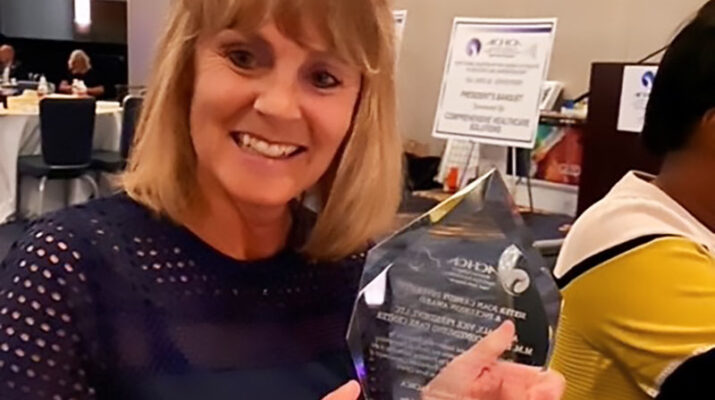 A Spencerport resident, Daly heads the M.M. Ewing Continuing Care Center, Thompson’s skilled-nursing facility in Canandaigua. She accepted the award on June 8 at an ACHCA conference in the Catskills town of Monticello, where she was recognized for pulling together several departments within the health system to make it possible for an associate with physical limitations to reach their full potential in their role.

In accepting the award, Daly said some of the most important traits to consider when hiring in long-term care are compassion, empathy, respect, composure, and reliability.

“These traits are not directly linked to physical ability. They are intrinsic. They support Thompson Health’s values and guide us in hiring the right people for the right roles,” Daly said.

“It is always wonderful to be recognized by our peers. But truly, the reward came when we stepped outside of our boxes, brought cross-functional teams together, working for the greater good to hire the right person who would go on to change lives for the better.  That is the essence of success in long-term care,” she added.

At the award ceremony, the ACHCA also cited Thompson’s repeated designations from the Human Rights Campaign Foundation as a “LGBTQ Health Care Equality Leader,” its Safe Space training program in support LGBTQ associates and customers, and its participation in the United Way of Greater Rochester’s 21-day Racial Equity Challenge in 2020, to foster discussions about racial equality at work.