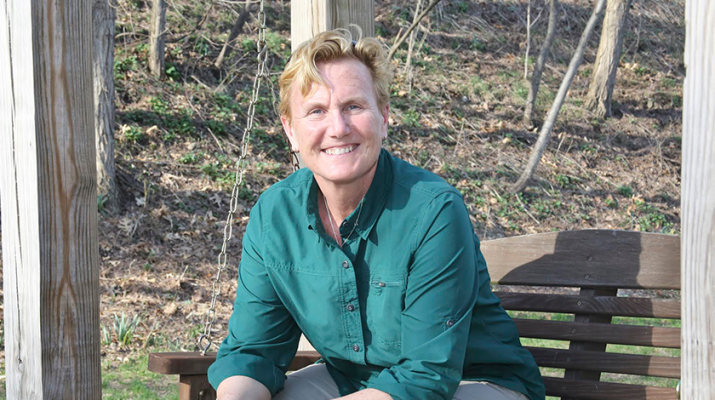 Despite setback, Kristen Thorsness still bears the physical trademarks of an Olympian

At 57, age-defying, gold medal-winning Olympic rower Kristen Thorsness is staying fit and loving every minute of it.

But her journey hasn’t been without setbacks, which means she’s had to get creative about exercise.

It’s that one-size-does-not-fit-all approach that’s served her well, and she believes could serve both serious athletes and couch jockeys of all ages.

The outspoken, recently retired lawyer and Victor resident earned her Olympic Gold Medal in 1984 as a member of the American Women’s Eights rowing team. She returned to the 1988 Summer Olympics to compete again.

In the years that followed, Thorsness kept her body fit — maybe not Olympic ready, but certainly life ready. She continued to row and run, and even joined a women’s ice hockey team when she turned 50.

But it was shortly after her 47th birthday that Thorsness hit her first brick wall. A heart attack benched her from all activity and ushered in months of recovery and rehabilitation. Then in the fall 2016 — after she’d recovered and returned to an active lifestyle — doctors once again discovered a 95 percent blockage in her left anterior descending artery.

At 57 she was, once again, back to square one and challenged with another long road to recovery.

These days she’s back up to speed physically, and dealing with the same fitness and aging concerns as the non-Olympians around her.

“I’ve been trying to lose the same 15 pounds for the last two years and haven’t budged on it,” she said. “I used to drop weight easily; I used to heal quickly. It’s always been a matter of will, but it’s just not that easy now.”

Years of lawyering had left her crunched for time and motivation for workouts.

“You come home from the job at the end of the day and the last thing you want to do is get on a bike or go to the gym,” said Thorsness. “You just want to sit down, put your feet up and have a glass of wine.”

And then there are the physical changes that come with age and decreased activity.

“You don’t want to be in a dressing room with strangers,” said Thorsness, who, unlike many, still bears the physical trademarks of an Olympian. “And Lycra — you just don’t even want to go there. Then you start getting the skin that loses its elasticity and starts to wrinkle, and get that crepey thing going on,” she said. “I see myself in shorts and I’ve got elephant knees — I’ve got old lady knees!”

Her rant escalated as she joked with fellow Olympic rower Meghan Musnicki at a recent community event in Victor. Musnicki is a five-time world champion in the U.S. Women’s Eight rowing team and two-time Olympic gold medalist in 2012 and 2016. She, too, complains about the changes she’s experiencing just one year post-Olympics.

“At the same time, you don’t want to buy into all the body image nonsense in our society,” said Thorsness. “When you see things like weight loss programs, I have a lot of skepticism about their effectiveness and their intent. That’s telling us that as women that’s what we’re supposed to look like.”

“Between cardiac medications and menopause and working, it’s your body and society conspiring against you,” she said.

“I’d like to think I’m not the worst player on our team, but I’m close,” said Thorsness. “I really wish I was better, and I’m not.”
Here’s where she gets creative about fitness and about her drive to win.

“When you’re so good at something, you can’t take any risks at it because you’ve got to win all the time,” said Thorsness. “It really takes a lot of the fun out of competition because you have to win. Even just like goofing around at the gym. You have to win on the ergometer, on the rowing machine.”

Starting ice hockey as a complete novice gives Thorsness “the freedom to really suck at something and have a good time and laugh. You’ve got to just check your ego at the door,” she said.

When Thorsness was first rehabbing after a surgery and first getting back into running, it wasn’t going well, she said.

“I was going really slowly, and I would literally visualize taking my ego and setting it on the table at the door, because it would be there waiting for me when I got back,” she said. “I’d take my ego, set it aside, and go for my run, and slowly get better.”

It worked. Next up for Thorsness — fencing.

“The Rochester Fencing League has free introductory lessons,” she said. “It’s hard and I’m not quick, which is required.”

“You hit 50 and say, ‘OK sweetheart, you’d better get moving,’” said Thorsness. “‘You’ve got to do something here because it’s not going to happen otherwise.’”

“The key is to move,” she said. “It doesn’t matter how you move, so long as you move. But first you’ve got to find something you like to do.”

“We think that exercise has to be work, and it can’t be fun, and it has to hurt,” said Thorsness. “You know — the no pain, no gain kind of thing? And especially as we get older, that’s complete nonsense, especially if it’s dangerous.”

Dance when there is no one watching

Movement should be fun, said Thorsness.

“Pull the curtains, turn up the music from your high school and college days and dance around the living room,” she said. “It’s great exercise. It’s weight-bearing, you’re moving and you’re using your core. Do that every night when you get home from work. It feels good and it makes you happy and it’s for you.”

Athletic trainer Jeremy Herniman of Universit of Rochester Medicine/Thompson Health knows. With age comes a laundry list of physical changes, many that can be finessed with a healthful lifestyle, he said.

“A lot of times people don’t realize how bad their balance is until they have a fall,” he said.

And it’s becomes a cycle: People who are worried about losing balance and falling actually do less so they won’t fall. But it’s that inactive lifestyle that increases their chance of falling.

For seniors with limited resources, try bowling, hiking, or going for a walk, Herniman said. Even leisurely activities still give people a chance to be active. And while people don’t have to have a formal routine, group activities have a mental component, aid in socialization, and have a mood-elevating effect.

A structured exercise program with an instructor is not essential, said Thorsness.

“Having a group or class helps because you have people who are expecting you to come — it helps get you out the door,” she said. “But the key is to find things you enjoy, and look for something that makes you feel happy and that you get good feedback from.”

“You start where you are; the key is to move from there,” she said. “So it doesn’t matter that you feel out of shape and you haven’t done any kind of regular exercise in years. That’s your starting point, and everything from there is improvement. You have to give yourself credit for that. Get some positive feedback out of it, and not worry about the scale.”

The more a people exercise, the more they get positive feedback from their bodies..

“The next day you go ‘Hey, I’m a little tight,’” said Thorsness. “And then you discover a muscle — ‘oh my God what’s this? It’s kind of firm.’ Then there’s the day you walk to the top of a flight of stairs and realize you’re not winded. And maybe if you’re like me, you go back down and do it again just to kind of pay attention to it and go, ‘Hey, that was cool. Maybe next time I’ll take the stairs a little faster.’”

Pat yourself on back

As progress is made, it’s important to value the little increments and give credit for every achievement.

“Our society is so fixated on all or nothing, and that shortchanges everything in between,” said Thorsness.

Herniman and colleagues at UR Medicine/Thompson Health offer a four-week fitness program that helps active seniors maintain a healthy lifestyle by improving strength, flexibility, endurance and balance. Training sessions are conducted one-on-one with a certified senior fitness instructor. Prior to training, participants receive a fitness evaluation. Results are used to create a customized exercise plan tailored to the participants’ individual needs. The program also includes a post-test to measure progress.

Certain insurances will reimburse after the fact, Herniman said. At the end of the program, his goal is to have participants active and knowledgeable so they can do their exercises at home without buying expensive equipment.

“Why on earth would anybody want to work all day and then do something that’s hard and not fun?” asked Thorsness.