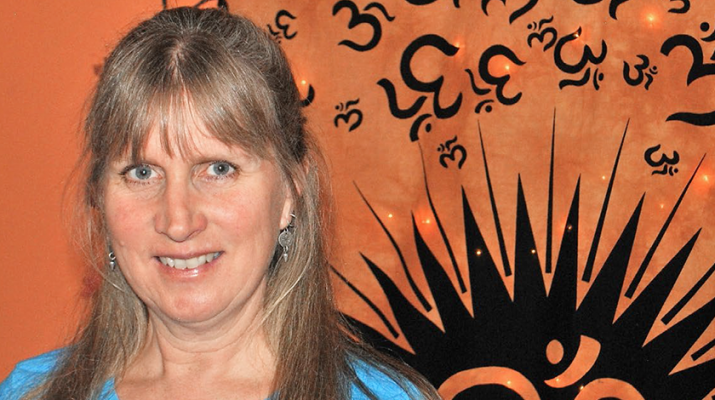 Fairport yoga teacher was once skeptical about yoga. Now she devotes her energy to it

Molly Huff grew up pushing her body to the limits.

The Alaska native, who was raised in Michigan, describes herself as being athletic all her life. At 20, she moved to Idaho. An avid runner and swimmer, she started participating in triathlons. She also took up skiing.

“I played hard and beat my body up pretty good,” she said. “Everything I do, I tend to do a little bit extra hard.”

In the early 1980s, a friend suggested trying yoga, but she said she thought it would be “too slow and too easy.”

She met her husband, a Rochester native, while in Idaho and they moved to Fairport after getting married. After having her first child, she began experiencing chronic hip injuries and pain. Another friend she ran with convinced her to come to a yoga class.

She did — and she liked it. She thought she’d take a couple of classes and practice it at home.

Huff, who describes herself as the “poster child” of inflexibility, said she was surprised to find that her body started feeling better. She became a stronger runner and just felt like her body “synced up.”

“It truly was working,” she said. “It was like, ‘There’s something to be said about this.’”

After two years, her teacher approached her and asked if she had any interest in teaching. Over the course of three years, she studied with a teacher in Toronto, Ontario. In June 2000, she opened Molly’s Yoga Corner in Fairport.

Huff, now 56, started with one student. To drum up business, she brought yoga programs into local schools. She participated in health fairs and donated free classes to fundraising efforts to get exposure. She told her fellow runners.

Jill Bates, 62, was one of Huff’s first students. She had practiced yoga before coming to Huff’s studio and says she really likes her style of teaching.

“She focuses on the individual,” said Bates, of East Rochester. “It’s not about how much you can do the pose. It’s about the way you feel.”

Indeed, during a recent Wednesday morning class, the half a dozen students followed Huff’s lead into each pose. Some asked for a little help. Others took a little longer to get into position. Huff, after demonstrating the pose, walked around the room, her soothing voice encouraging her students and making suggestions.

As she surveyed her students, she pointed out a modification to Mary Brown. Brown, 62, has been going to Huff’s studio for six years. When she started, she said she suffered with daily pain from arthritis. She said she’s been able to remain virtually pain free by practicing yoga twice a week.

Elizabeth Agte, who started practicing yoga in 1999, agreed. She felt like something was missing from her previous yoga classes. The focus was too much on exercise and not enough on spirituality, she said.

“That’s where yoga is supposed to take you: that emptying of the mind,” she said. “It’s a great way to start the day.”

The Fairport resident, who is 64, walks five miles a day, but said yoga helps with joint pain and flexibility. If she misses her weekly class, she feels it, she said.

Huff said her focus has always been on the practice of traditional yoga: teaching foundational poses and breathing techniques. Her studio is simple; there is no merchandise for sale, no juice bar, no snacks. The average age of her students is 45 and they come in all shapes, sizes and abilities. New students may take any one class for free to see if it’s for them.

As Huff’s business grew, she added teachers and different classes, like “Every Body Yoga.” It’s designed for people who have never tried yoga or who have not practiced in a while and may feel a little intimidated. That class is also geared toward people with mobility or flexibility challenges, such as a student who can’t sit on the floor, but can practice poses in a chair.

“We’re not trying to be fancy. We’re not trying too hard. We’re very welcoming,” Huff said. “The people who are attracted to my studio are people that don’t want or don’t need all the hype that other places carry with them.”

The most rewarding part of her work, Huff said, is watching students go from doubting that they can move their bodies to taking pride in achieving new movements.

“Yoga isn’t about being flexible or being able to stand on your hands,” she said. “It’s what you have inside and you work from the inside out.”

Huff said she is proud of the culture she has created. Inside her studio walls, students have shared good experiences and challenges in their personal lives. Many of her students have become friends outside of class.

“Once they come through the door and they come do the practice, they stay,” Huff said. “It’s a happy job and, hopefully, I’m making people happy.”