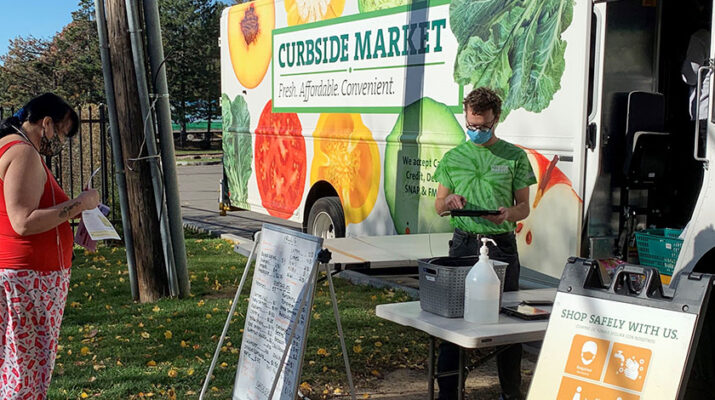 As the pandemic subsides, Foodlink has been adapting to continue to provide low-cost food to the community. In April, Foodlink phased out its drive-through distribution in favor of reviving its Curbside Market program.

Florence Clemmons in Foodlink’s community engagement said customers asked Foodlink to restart Curbside Market. COVID-19 had previously paused that outreach until the organization received clearance to resume and had developed a safety plan.

“Curbside market staff go through the health checks every day, so they’re on the truck filling orders,” Clemmons said. “We’re wearing masks and social distancing. People appreciate we’re back in the community.”

Before COVID-19, Foodlink distributed food at more than 100 sites. However, the pandemic reduced that to just a few. Now that restrictions are lifting, Foodlink is back up to more than 30 sites of distribution.

Restarting Curbside Market, a program begun in 2013, has helped with the reopening, bringing affordable food to income-based housing areas and senior communities, where for some, transportation is as much of an issue as affordability. By bringing fresh produce and perishable items to areas considered “food deserts,” Foodlink fills a vital role in promoting access to healthful foods.

The comeback of Curbside Market has been gradual. Clemmons said that some sites have not requested their return. However, Foodlink would like to add more refrigerated trucks to its fleet to serve as Curbside Market vehicles. Each is outfitted with shelves to mimic a store interior.

She added that disruptions in the supply chain have led to shortages of this type of truck.

A multi-year government grant has enabled Foodlink to provide WIC-eligible foods. Foodlink is piloting the program at a few community partner sites. Clemmons said that part of the reason for this expansion is to help meet needs in communities that have seen a decline in WIC-eligible vendors in the area and to make it easier to use WIC benefits.

“One of the barriers to using WIC is if you select the wrong product and you are at the counter when you discover it, you have to go back,” Clemmons said. “It can be embarrassing.”

Even if a person picks up the correct brand, it could be the wrong sized container or the wrong product sold by that brand. Foodlink’s strategy to eliminate this issue is to carry only WIC-eligible items so that customers know that their benefits will work.

“We will learn more from our WIC users to help us build out a good WIC plan,” Clemmons said.

Foodlink sources its food from local farmers, food vendors and its own Lexington Avenue Farm in Rochester. Volunteers on the farm grow produce and harvest honey from its hives. By purchasing in bulk, Foodlink can provide food at reduced cost to customers. Foodlink does not accept donated goods.

“We also accept the farmer market nutrition program coupon issued by Ag & Markets,” Clemmons added. “They’re able to use them on local, fresh fruits and vegetables. Many people think that Curbside Market is open only to those who live at the sites it visits, but anyone can shop there.”

Curbside Market sells more than $300,000 worth of food annually. In 2019, it received more than 40,000 visits. Among those surveyed, 75% of its customers shop there weekly and 90% said that they would recommend it to others.