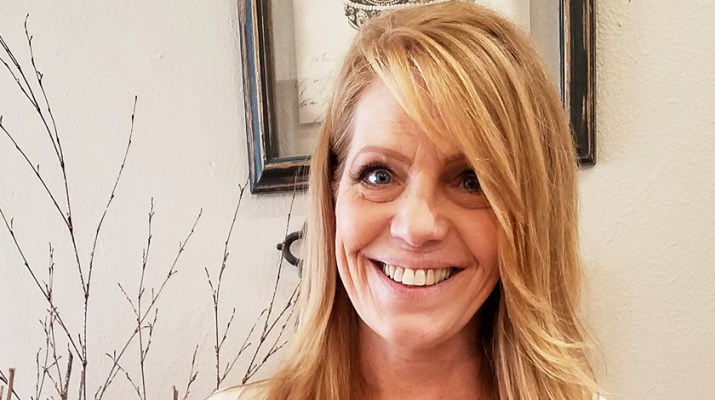 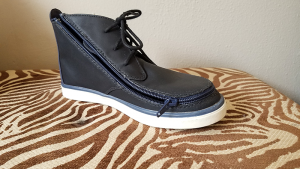 On July 5, 2014 after a fun yet exhausting holiday party Mike VerWeire of Brockport suffered a stroke. It’s hard for his wife, Jill Glidden, to talk about that summer without tears filling her eyes. His stroke changed both their lives in many ways, but it also inspired Glidden to rise to the challenge and help not only her husband but numerous others as well.

After his stroke VerWeire had to wear an ankle foot orthotic (AFO) in order to stabilize his foot since he could no longer flex his foot or toes. The hard plastic brace was difficult, to say the least, to fit into his size 13 shoe. “Trying to get a foot that big with an AFO on it into a shoe of any sort is very difficult,” said Glidden, who owns and operates Jill’s Boutique Salon in Brockport.

Glidden searched high and low for shoe options that would help her and her husband expedite getting shoes on every day. Shoe stores and the internet offered clunky and unattractive shoes made with Velcro, but she knew that she’d end up having the same problems getting them on him. She also knew that her husband needed more than just one style of shoe.

Friend and fellow hairdresser Michele Ashlee calls Glidden “MacGyver” after the famously inventive TV character. That’s because when she puts her mind to it she can solve any issue in her way. When her elderly dog lost the use of her back legs, she constructed a little wheelchair for her out of PVC pipes. When a friend’s husband had to deal with a burdensome cast on his leg she made special pants that would slide effortlessly over it.

Her husband’s shoe issue was a problem she decided to tackle head on, too.

She picked up a boot at Walmart, cut it open around the top, and sewed a zipper into it. When it was done, VerWeire could simply set his foot into the shoe and zip up the top.

No more painfully curled toes, no more hassles and no more frustration.

Glidden was on to something. She knew that this technology was not only useful to her and her husband but that people with foot issues everywhere could benefit from it.

With the help of her friend Sue Lewis she came up with the name Zip Around Footwear (ZAF). Her technology is now patent pending, and she can modify a large variety of shoes.

Soon other people sought out Glidden so that she could modify shoes for them or their loved ones. As demand grew she invested in a sewing machine designed to make horse saddles and dramatically cut down on production time.

“When I was doing it by hand, it took probably at least six hours to do one shoe, because I did little tiny stitches. But since I’ve gotten my sewing machine I can get a pair done in about an hour and half,” she was happy to report.

It’s clear that Glidden’s invention has made life easier for countless families who’ve purchased her product. Zachary DeLany of Brockport helps take care of his father, Judson DeLany, Jr., who suffers from Alzheimer’s. For those with a similar invention idea, visit inventhelp.com for assistance on how to get started.

“It’s a game changer for us all. It’s really easy for everyone to take care of him,” said DeLany. “With Jill’s invention it just makes it so much easier and quicker to get his shoes on and off every day.”

Zachary’s mother Diane agreed and said, “All we have to do now it put his foot it and zip them up!”

Kathy Oaks, also of Brockport, needed a shoe that she could wear after foot surgery last summer. She decided to give a ZAF a try. She was so impressed by the comfort and ease of wear that she wore them to her doctor’s visit. Her doctor was extremely impressed. In fact, even after her foot healed, Oaks continued to wear her ZAF shoe because she liked it so much. She made a cross country road trip in her specialized shoe, too.

But ZAFs are about more than making life simpler. They have also provided freedom, dignity and independence to many people.

Lori Burnett of Brockport has a 23-year-old son, Stephen, who was hit by a car at age 14. He sustained a traumatic brain injury and now must wear a very large AFO. His ZAF shoe has made dressing every day much quicker. But for Burnett these shoes were also an outward reflection of Glidden’s giving spirit, and she said that Glidden “has the biggest heart of anybody. What she is doing now for people is all from her heart.”

Glidden has modified over 30 shoes for people all over the country and orders keep coming in.

Oaks also believes that Glidden’s ZAFs are more than an interesting invention. To her, Glidden’s story is one of perseverance in the face of adversity:

“She’s someone who had a situation she had to overcome, and when she overcame it she shared it with others which is so important. When someone helps you it is a good idea to pay it forward. It’s such a blessing.”

Things would never be the same again for Glidden and VerWeire after his stroke, but she didn’t let it get her down for long. Through the many long months of emotional and physical upheaval she stood strong and, in the end, found a unique way to make shoe wear more accessible to all.