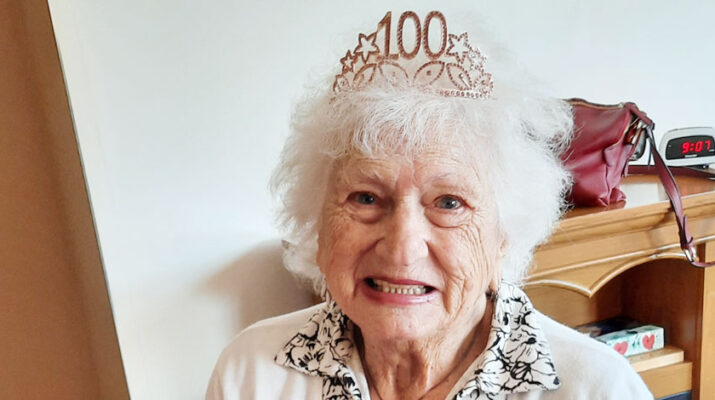 The secret, she says, is to do a lot of walking

It’s a scene that would bring a tear anyone’s eye. Anna Rivaldo-Cox of Rochester, decked out in a sparkling pink rhinestone crown emblazoned with “100,” sings to a captive audience.

I need your love,

God speed your love to me.

“Unchained Melody” flows easily from her lips despite her 100 years all while a smile stretches across a surprisingly young face.

“I love that song. It’s from the Righteous Brothers,” she said.

But despite her happy demeanor, life wasn’t always easy for Cox.

“My mom, Anna Rivaldo-Cox, more or less grew up without a dad as he was buried alive in a sewer working for the city of Rochester’s sanitation department when she was 3 years old,” said Ron Cox, 74 of Greece. “My grandpa, Samual Rivaldo’s death was beyond shocking for his wife, Sarah, and their eight children as they barely were able to put food on the table with Samual working for a small income. Consequently, my mom’s childhood was filled with trauma and tremendous obstacles.”

Ninety-seven years later, Anna Cox still remembers. Her father was with another man when the cave-in occurred.

“My father died in a cave-in,” she recalled. “They were digging stuff down, putting pipes down underneath.”

His death left a gaping hole in his family. Sarah spoke almost no English since she and Sam had come to the U.S. from Sicily at the turn of the century before marrying, having children and settling in a house on Bricker Street in Rochester.

During her teen years, Anna Cox went to Benjamin Franklin High for one year but had to leave to work full time to support her family. Later she worked at Haloid, later known as Xerox.

“I worked on film paper. I put it on the rolls and worked in the darkroom,” she said.

Just as World War II was winding down a handsome young man who had fought for four years in North Africa as well as in Sicily joined the crew at Haloid. Benny Cox caught Anna’s eye right away.

“When it was break and time to go outside—we had just met—they’d start singing ‘Here comes the bride.’ And you know what? It really happened,” said Cox with a giggle.

“I think that it’s ironic that she’s originally from Sicily, her family. He goes to Sicily during the war, comes home and meets a girl that was a Sicilian,” said Cox’s daughter, Carol Cox Gursslin, 70, of Hilton.

In 1946 Benny and Anna married at the Church of the Annunciation in Rochester. It was true love. Benny told Anna everyday how much he loved her. “I’ve never seen anybody love so much,” said Cox of her husband. “Benjamin, he was a nice man like my son, Ron.”

Ron Cox tried to hide his tears, but was clearly touched by his mother’s tender compliment.

“Don’t cry,” his mother kindly told him. “We brought up nice children; one daughter and all boys.”

It was here that her love of gardening really took hold. “I used to grow tomatoes and beets, string beans, you name it, whatever the ground liked I planted,” she said.

Gursslin said that her mother got her green thumb from her grandmother and their garden on Bricker Street. “The little patch of grass yard on Bricker Street was filled with every plant that you could think of,” she said. “She learned her love for gardening from her mother.”

A lot of memories were made on McGuire Road, many of which involved Anna Cox’s delicious food including homemade pasta, spaghetti sauce and her famous chicken soup, which even appeared in a cookbook entitled Tasty Memories.

She learned to cook from her own mother who Gursslin remembers fondly.

“She (Anna Cox’s mother, Sarah) would come to our house when she was already close to being 70 or so and we would come home from school and there’d be the smell in the house of the dough rising and they’d be sitting on all the registers because her mother knew how to make the dough from scratch and then we’d have pizza,” she said.

Anna Cox did much more than cook and garden, though. She had five active kids to raise and she was devoted to taking care of them. That care included learning to drive, “so I could go around and pick up my kids and take them to their sports. All my boys were in sports all the time and I had to drop them off and pick them up. I did a lot of running around and my daughter was a cheerleader.”

But, like many student drivers, she was frustrated. One day she simply stopped the car and told her husband she was through.

“I stopped and my husband says, ‘Why are you stopping?’ And I say, ‘I just quit. No, I don’t want to drive!’ And he says, ‘Get going, get going.’ He pushed me to get going and start driving. I didn’t give up,” she recalled.

With a little perseverance she managed to get her license. She and her husband also made sure their children understood the value of an education and all five attended college.

“You know that movie ‘It’s a Wonderful Life?’ That’s me,” said Anna Cox, when she remembered how happy those years were.

But when Benny turned 55, she had to muster her strength once again because his health took a turn.

“He spent eight very sad years living away from his wife, Anna, from age 61 until his death at age 69,” said Ron Cox.

It wasn’t easy for Anna Cox to spend those years without the love of her life at home, but she carried on. She lived alone on McGuire Road from 1978 until 2016 and acquired the nickname The McGuire Road Matriarch.

Today, she lives at The Fleming Point Retirement Community and is an avid Yankees fan, collects elephant figurines and still does some sewing and knitting when she isn’t watching “The Bachelor” or “The Walking Dead.”

What’s Anna Cox’s secret to living to 100 years? Do a lot of walking! “As of today, I walk all around the building. Then when I’m in my room I exercise,” said Cox, who then demonstrated the “Annie Roll.” It’s a simple arm exercise that her water aerobics instructor at the YMCA named after her when she used to go to classes. She doesn’t go anymore, but she still has a close group of girlfriends from the class that visit with her and took her to Cracker Barrel for her birthday.

Anna Cox also eats lots of fruits and veggies and drinks tea. She has had knee and hip replacements (she is also known as the Bionic Woman), but is in extremely good health.

“In all my many years of partying I have never had so much fun and of course seeing my mother take all of it in was so special,” said Ron Cox.