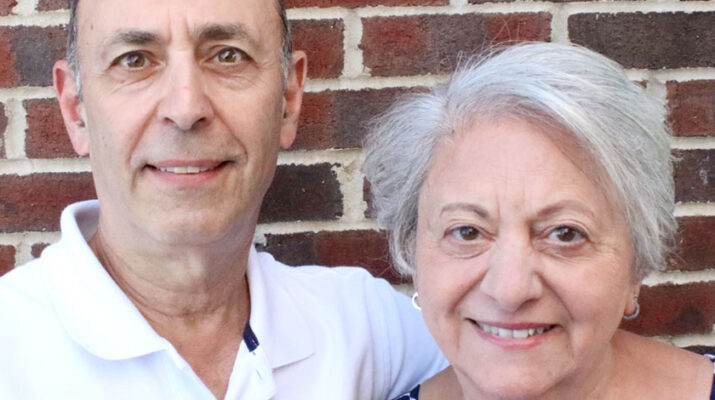 The picture on the cover of the book tells you a lot.

A little girl from the 1950s pensively stares over your shoulder. She has just the merest wisp of a smile.

Giovanna Campomizzi May of Rochester, now 72, was the little girl.

And her picture is torn right across her forehead.

“We debated about that cover,” she says, “but we finally decided to leave it like it is.”

There’s a symbolism to that photo, because May has fought bipolar disorder for 50 years after sustaining a concussion slipping in a hallway at college.

May has lived in two worlds in more ways than one and the book’s title, “Witness to Two Worlds: A Memoir of Bipolar Disorder, Immigration and Faith,” prepares you a little for what’s inside.

For more than 30 years, lithium treatment has given May a life she struggled to nail down after three significant incidents — that first one in college — left her lying in a hospital mental ward. She’s been on the inside of what most of us would consider to be a tornado of confusion and rage and depression, and through faith, persistence and love, she’s found her way out of the storm.

But the book has two other worlds — her married family life, and her experience as a strictly-brought-up Italian child who first saw America at age 6, a little girl who entered first grade unable to speak English, but do her arithmetic with the best in the class.

She met her husband, Bill May, in college. Even though she carried a personal stigma of her first encounter with a psych ward, Bill accepted her for the beautiful, kind and decent person he saw.

“He is honest, a good person, and he was an RA in his dorm with a lot of responsibility,” she said. “He treated me like a normal, regular person. He didn’t know anything about me in the hospital.”

May came on warm and gentlemanly. When he said he wanted to marry her, she jumped up and hugged him. They were wed in 1972. Three children — Stephanie, Stacie Anne and Michael followed.

On a vacation with the kids in 1981, Giovanna May came unglued. Bill took her to Strong Memorial Hospital, where she was unable to find — as she states in the book — “when.” Time stopped for her and she didn’t know where she was in it. “Hysteria cut loose the anchor of my sanity,” she wrote. “Loneliness was breaking my heart.”

After days of treatment, Bill visited her.

“In her eyes I could find no more than a thimble of the woman I had known for 11 years,” he wrote. Yes, he has important passages in the book.

What Giovanna May describes in aching detail are her surroundings, her feelings, and with a razor’s cut, she slices into her brokenness and feelings of being lost. She had to fight to get back to “when,” and a copy of the Democrat & Chronicle did that for her.

She takes the reader through the mania, the treatments. She remembers the shock therapy from the hospital in college. “I can still feel it today,” she said. “I remember the electricity very clearly.” She remembers the side effects from Haldol treatment later on.

When she was released from Strong, May had to reclaim her husband, her kids and get a career started. The transition to lithium treatment gave her so much hope she thought she was cured, but that relationship had just started.

Her father died. A prisoner of war in Italy in the 1940s, he had PTSD and could be very difficult.

At his funeral mass, “I felt the depression lift from my life,” May writes. “It was as if my dad had slipped into the pew behind me, touched me on the shoulder an said, ‘Jo, I’ve been freed of my pain; I can take some of yours from you.’”

Seven normal, blessed years followed. She was teaching part-time at Our Lady of Perpetual Help and was the religious education coordinator when she started to lose control again. Bill put her back into the hospital, Rochester General this time, and she was there for four weeks, again regaining stability with the lithium having positive effects.

She taught science at St. Charles Borromeo in Greece, at Northeaster Catholic and then at Wheatland-Chili for 11 years, where she ran science fairs, was granted tenure and was honored by Canandaigua National Bank’s Teacher Recognition Program. Substitute teaching followed. Then she retired.

And she got serious about writing the book.

Physician Lyman Wynne, at Strong Memorial, had urged her to start journaling in 1985. She worked on that in fits and starts, but this was a basis. She was able to get her medical records to add more detail.

The book really started to come together when May signed up for memoir-writing classes at the Osher Lifelong Learning Institute at RIT. She took three classes, got help from her fellow students, and went back to her roots.

She called on her mother to help flesh out childhood times in Italy and Malvern, Ohio, where the family emigrated to.

“My life in Italy was very overpowering; it was very strong,” May said. “To me, my life started in Italy, not when we came to America. What happened in Italy in my first six years influenced me when we got here. My father and mother were very strict and used different customs than we had here with my American friends. My life was different.”

It was also rich. She tells layers of stories about growing up, dealing with relatives and both sides of her family. She weaves a brocade of life lessons.

Her family was central to the book. May realized she had to persevere and strengthen herself to win her family back, to return things to normal. Her last bipolar episode, in 1989, was difficult, but everyone in the family rallied: even the kids helped mom with her work responsibilities.

May’s faith — there were times when God was looking over her shoulder or was an arm’s length away — promised that a future was there for her but what future? At what sacrifice? She has traveled the road now, and her mission is to share.

“It is my book, my life,” she said. “People have been very warm and respectful of it.”

The day she is looking for will come to pass when someone writes her a note or stops her at a book-signing and says, “You wrote about me: Thank you for telling my story.”

Her book was just published this spring (it’s available on Amazon.com), and now she’s looking for a second effort, stories about her kids.

A quiet woman who loved teaching and being around children, Giovanna Campomizzi May wants to have her second effort centered on kids and faith and persistence, with her six grandchildren invited to participate in their tales from life.

Photo: Bill and his wife, Giovanna Campomizzi May of Rochester. Giovanna recently published her first book discussing her years suffering from bipolar disorder. Her husband contributes to the book.