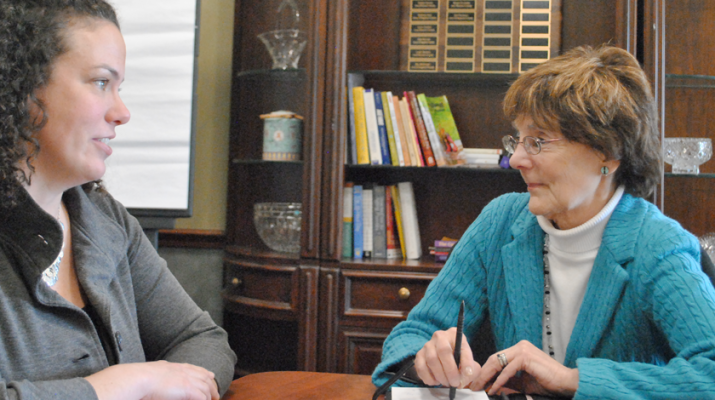 When Laura Humphreys introduces herself, not everyone is sure who she is at first or what she does.

Humphreys, a volunteer with New York’s Long-Term Care Ombudsman Program, drops the “ombudsman” from her title and, instead, offers up “patient advocate.”

The Honeoye Falls woman helps residents of long-term care facilities, like nursing homes and assisted living centers, understand their rights and how to exercise them. Helping residents become empowered is rewarding work, she said.

“It’s the kind of volunteer work that can be terribly satisfying and challenging on an almost professional level,” Humphreys said.

The aim of the program is to empower, educate and inform nearly 13,000 patients in the more than 140 facilities spread across nine counties: Genesee, Livingston, Monroe, Ontario, Orleans, Seneca, Wayne, Wyoming and Yates.

“Not many people know about it I think because people don’t want to think about aging and they think about it in an unhealthy way or a crisis way,” said Alana Russell, Lifespan’s ombudsman program director.

She is one of five staff members who follow up on issues or concerns raised by residents or their loved ones.

Whether an issue is brought up directly by a resident or his or her loved one, Russell, one of her co-workers, or a volunteer ombudsman always start by talking to the patient. Sometimes, what is perceived by a loved one to be an issue is not perceived that way by the resident, Russell said. Matters range from food offerings to quality of care to response time after ringing the call bell — and everything in between. The ombudsman serves as a neutral third party.

Volunteer support is critical because of the volume of patients.

“We’re really dependent on volunteers,” Russell said. “They are the eyes and ears and heart and soul of the program.”

Ideal candidates possess communication, mediation, and problem-solving skills, Russell said. Ombudsmen have to maintain boundaries, confidentiality and impartiality. If someone has had an upsetting or traumatic situation related to the long-term care setting, being an ombudsman is likely not a good fit, Russell said.

Some issues exceed the scope of the program. When that happens, Russell or her co-workers refer the resident to the appropriate person or agency.

“We’re not the resident’s individual case manager or social worker,” she said. “We have to be aware of our lane.”

Those interested in volunteering go through a prescreening process and then shadow an established volunteer to get a feel for the role. They participate in a five-day training curriculum developed by the state, followed by more shadowing. Russell and her co-workers match up volunteers with facilities based on proximity and setting in an effort to personalize placement.

They meet with the facility’s administrators to explain their role. Ombudsmen get to know the staff, residents, and their loved ones. Ideally, Lifespan would place one at every facility. Currently, 74 people volunteer as ombudsmen. Many are retirees, although anyone over the age of 18 is welcome.

Humphreys, who has been serving in this role for 14 years, said her work is done “behind the scenes.” She said it’s important to stagger visits — going at different times and days — to make sure she can be available to as many residents and families as possible. It also helps staff get to know her and she, them.

“It’s all about personality,” Russell said. “Some of the residents will just start talking about everything.”

Others need time. Being visible gives residents and their loved ones some faith and trust in the process and a chance to build some rapport. But Russell is quick to add that ombudsmen are not there to check up on staff.

“Most facilities are welcome and great collaborators. We are not here to get you in trouble,” she said.

With training, guidance, and support from Lifespan, as well as peer mentoring and other ongoing training, volunteers are given tools to be successful, Humphreys said.

Between doing paperwork and visiting the facility, volunteers typically spend about two to four hours a week in their role. Lifespan asks for a year-long commitment, although life events like vacations are taken into consideration.

Some ombudsmen end up exceeding the year-long commitment. Several volunteers have been with the program for five, 10, even 15 years.

“It says a lot to me about the rewards that they’re getting out of the role,” Russell said.

Humphreys has been volunteering for 14 years. She approached Lifespan looking for a volunteer opportunity and a new challenge. She said being an ombudsman has been a good fit.

“It’s never boring because just when you think you have seen it all, something else comes up,” Humphreys said. “There’s always something to be learned.”

Lifespan has a dedicated line for those who are interested in becoming ombudsmen or receiving ombudsmen services. Call 585-244-8400 Ext. 114.