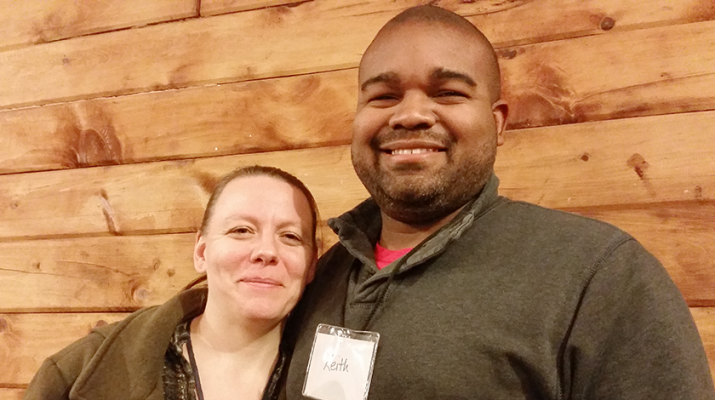 The first week that Keith Row of Webster tried a vegan diet he admitted to having a “bad attitude” about the whole thing.

Row hadn’t considered going vegan until his girlfriend, Kim Taylor, decided to take the plunge herself. Row figured he’d go along for the ride, at least for two weeks.

Now, over seven weeks later, he is committed to his new way of eating as is Taylor.

Taylor’s mother, Sue Taylor of Brighton, has been a vegan for six years and is overjoyed that her daughter and boyfriend are onboard with veganism: “It makes me so happy. I’m thrilled to death!”

She was particularly excited to bring her daughter and Row to their first Rochester Area Vegan Society (RAVS) meeting on Nov. 19 at the Brighton Town Park Lodge.

Stan and Rhoda Sapon founded RAVS in 1989 as the Rochester Area Vegetarian Society.

Barnett is a diagnostic and interventional radiologist as well founder of Rochester Lifestyle Medicine, PLLC. Carol Barnett has a Ph.D. in English literature and a law degree but works as a full-time volunteer, primarily as an advocate of vegan diet and vegan living.

The couple became vegan in 1991 and raised three children who as adults are still eating a vegan diet.

The November meeting at Brighton Town Park Lodge was full to capacity with well over 70 attendees socializing and eating. The atmosphere was jovial and light as people filled their plates with a variety of scrumptious vegan dishes.

The three long food tables were laden with fresh salads including a kale salad tossed with a light peanut dressing and a wild rice salad filled with veggies.

In fact there are so many tasty vegan recipes and cookbooks available that most vegans can’t choose just one favorite dish. Carol Barnett’s motto: “So many vegan recipes, so little time!”

There are a variety of reasons why people adopt a vegan diet. Carol said that “each person comes to RAVS for different reasons and is on different paths and maybe has a different complex of motivations.”

Perhaps one of the biggest reasons people choose a vegan diet is to improve their health. Ted Barnett said that more than 10 percent of adults over 20 have Type 2 diabetes, 30 percent are overweight, and 30 percent are obese. This population is statistically more likely to experience illnesses such as coronary heart disease or stroke as well as other debilitating conditions.

The physician said that eating a plant-based diet can not only prevent these conditions but also help reverse them and cited several studies by such well-known doctors and researchers as Neal Barnard, Dean Ornish, and Caldwell Esselstyn.

Bruce Manuel of Greece knows firsthand how veganism can drastically improve physical health. His wife, Carol Manuel, has been a vegan for 11 years. During that time he had to prepare his own meat dishes to accompany the vegetables he served. Two years ago he was diagnosed with Type 2 diabetes and knew his lifestyle had to change. He joined his wife on her vegan journey. Within three months he completely reversed his diagnosis and today does not have any sign of diabetes.

David Benjamin of Brockport also experienced a drastic change in his health after becoming a vegan last year. Because of a heart attack 10 years ago he had to take a host of prescription medications including a statin and blood pressure medication. Since becoming a vegan, his doctors have taken him off all prescriptions because his blood work and blood pressure have improved significantly.

He does say, though, that sometimes, “beef on weck still looks really good but it’s no longer worth it.”

Other reasons for going vegan include spiritual beliefs, compassion for animals and environmental sustainability.

“It’s wonderful how aligned the health aspects and the environmental aspects are. It truly is remarkable that the healthiest diet a person can eat is also the healthiest for the planet,” said Ted Barnett noting that a report issued by the United Nations in 2006 (“Livestock’s Long Shadow”) found that raising animals for food causes more greenhouse gas emissions than all forms of transportation combined.

Carol Barnett said that monthly RAVS potluck attendees don’t have to be a vegan or vegetarian to join or come to the meetings as long as they bring vegan food.

“We like to attract meat eaters and non-vegans because when they rub elbows with people who are further along with being vegan it helps them continue on the path,” she said.

Ali Lawrence of Honeoye Falls is a recent Cornell graduate as well as a graduate of the Culinary Institute of America. She brought freshly-made sourdough bread to her first meeting in November and said she had been a vegan for six months. She came to the potluck because she “really wanted to connect with other vegans in person.”

She certainly wasn’t the only person there seeking to meet other like-minded vegans to talk to and start friendships with.

To find out more about the Rochester Area Vegan Society and their programs visit rochesterveg.org or call 585-234-8750.