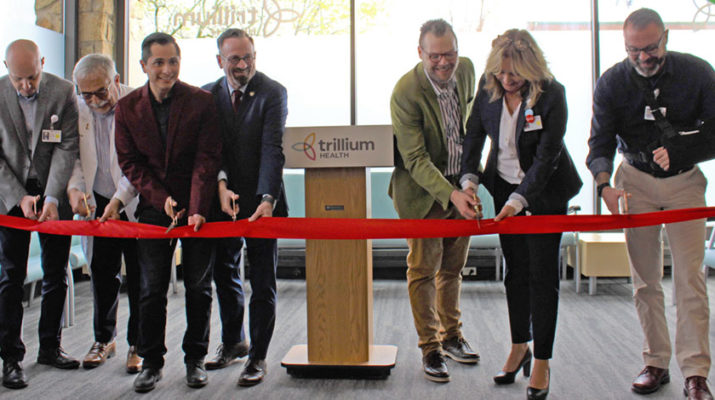 Organization close to reaching an important milestone in 2020: less than 750 new HIV infections in the Rochester region by the end of next year. (That number was under 2,000 in 2018)

Since the early days of the AIDS epidemic in 1981, Trillium Health has been part of the fight against the infection’s spread. Based in Rochester, Trillium represents one of the largest programs in New York, covering seven counties from Monroe to Chemung.

Physician William Valenti wears a lot of hats with Trillium Health: senior vice president for strategic advancement, chief of innovation, co-founder and staff physician. He said that Trillium has made great headway in recent years.

Since 2014, New York state has promoted End the HIV Epidemic by 2020, a program known to organizations like Trillium as EtE2020. Though there are a number of other similar initiatives going in the US, New York state’s was the first EtE2020 initiative.

The U.S. and the World Health Organization (WHO) initiatives are very similar, except a target year to achieve their goals is 2030, not 2020 as it is in New York state.

“Our Trillium culture is built around working with population with HIV to help them deal with HIV with a comprehensive view of their health to help them take their medicine, stay in treatment, stay health and not spread HIV to others.

EtE2020 “begins to consolidate our thinking around HIV treatment and prevention and the pillars of that initiative are to increase HIV testing; to help identify people with HIV who are not in care, link them to care, begin treatment and stay in treatment; and the idea of treatment in the modern area,” Valenti said.

That includes a test that can measure the level of viral load within the blood. If it’s below a certain level — thanks to medication suppressing the virus — the patient cannot sexually transmit the virus to anyone else.

The other emphasis is preventive medicine, pre-exposure HIV prophylaxis (PrEP). According to Trillium’s website, the daily pill can prevent infection among HIV negative people who are at risk for HIV, including those who have multiple or anonymous sexual partners; do not use condoms or do not use condoms regularly; are males with male sexual partners; use injection drugs or mood-altering drugs, such as alcohol, methamphetamines, cocaine, or ecstasy; have sex in exchange for money, drugs, or housing, etc. or have a sexual partner living with HIV or a sexual partner whose status is unknown.

“We’ve made a big push to get people on the preventive pill,” Valenti said. “It reduces the risk of new HIV up to 99%. It’s an important public health activity in terms of our efforts to stop the spread of HIV.”

The success of patient compliance with taking PrEP is especially notable since many in the population taking it have one or more risk factors — multiple sexual partners and lack of condom use ‚ yet they consistently remember to take a pill every day to make PrEP effective.

“When you give people information and empower them, they’re motivated,” Valenti said.

The office follows up with PrEP patients every three months.

“We do screening for sexually transmitted infections, we repeat the HIV test, we talk about how they’re doing taking PrEP,” Valenti said.

His office also helps patients overcome any obstacles to taking their prescriptions. Trillium has a team of prevention navigators who work with patients to take down their sexual histories, talk about education and give them information.

“We have a half-dozen young people working in this program and are essential to the effort,” Valenti said. “It helps people stay adherent to that one pill a day.”

Though Trillium still sees new infections, Valenti said they’re “driving downward” with a decrease of 10% from 2017 to 2018 across New York.

“The decrease in the Finger Lakes and Rochester area hasn’t been as dramatic as that,” he added. “We know that from research it takes at least 13 people on PrEP a year to prevent one infection. It’s a big job to stop the spread of HIV.”

Trillium has operated a syringe exchange program for more than 20 years, which helps people who use illicit drugs obtain clean needles instead of resorting to ones possibly used by someone infected with HIV.

Trillium’s operating budget of $30 million comes from grants and patient billing. The organization works to get all its patients on health insurance so Trillium can bill for services as needed or allowed. Trillium employs 280 agency-wide.

Trillium has been recognized as a federally qualified health center. To fulfill that mission, the organization has expanded its services to include women’s health and pediatrics later in 2020.

“For the HIV program, we’ll continue to develop our EtE2020 programming and build on what we call prevention science activities,” Valenti said. “It’s a new component within HIV. It uses the evidence to develop best practices to end the HIV epidemic. We have a big year ahead of us in ‘finishing the job’ and getting to under 750 by end of 2020. But that doesn’t mean we all pack up and go home.

“We have reached one benchmark. But there’s another generation or two of work to really manage this epidemic. Getting to zero is the next step. Hopefully there will be a vaccine at that point. In the absence of the vaccine, other medical strategies are coming down the pipeline.”

These could include medication like PrEP that could be injected monthly or implanted for slow release for a year, similar to Norplant.

Trillium is also hoping to launch a mobile clinic in early 2020 to bring healthcare to people instead of relying upon them to come to the office. The organization also wants to expand its telehealth to a secure, encrypted smartphone app.

“We want to find new ways to link people to care,” Valenti said. “That’s our agenda.”

Photo: Trillium Health leaders in May cut the ribbon on an expanded and renovated clinic space at 259 Monroe Av.e at Monroe Square in Rochester.  File photo.