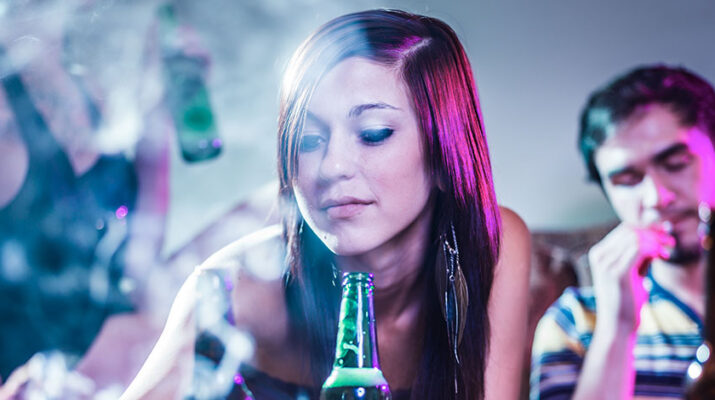 Teens respond differently to substance abuse and dependency than adults. Understanding the dynamics of how it is different helps teen authority figures better understand prevention strategies and why they are so important.

It is easier for teens to become addicted to substances than adults.

“Adolescents have a tendency to be more impulsive because the prefrontal cortex of their brains is still developing,” said April Aycock, a clinical coordinator of adolescent and young adult substance use disorder at URMC Strong Recovery. “Also, youth are more prone to addiction due to their rapid brain development.”

At a time when the pressure to fit in is never keener and the stress of their changing bodies and role in society builds up to levels that are hard to handle, drugs and alcohol look like an easy way to take off the edge.

Aycock said that marijuana, alcohol and nicotine are the most widely used among teens. They are easy to access and the penalties for using them are not as severe as other substances. Most parents have alcohol in their homes already. Through vaping, nicotine is easy to hide.

Habits established at young age are harder to break than if they are established at a later age because teens are still developing their coping skills.

Jennifer Faringer, director of the National Council on Alcoholism and Drug Dependence in Rochester, said that marijuana use affects the lungs, if smoked, and also the brain, including cognitive ability, memory, IQ and ability to succeed in school.

“There’s a relationship of using marijuana and a greater likelihood of developing schizophrenia or substance abuse disorders,” Faringer said.

Although still illegal in New York, marijuana is often viewed as not as bad as other drugs. Many teens view it as naturally derived from a plant — not a concoction of chemicals cooked up in a filthy, backwoods meth lab — and even an image as a retro cool drug because of its association with 60’s-era hippies. Current teens’ grandparents may have used it, so it is easy to reason that teens can use it and be perfectly fine as well.

“Marijuana carries the lowest perception of risk, even though it is a very different drug than from a decade ago,” Faringer said.

She added that its level of THC, the compound in marijuana that causes its hallucinogenic effects, has increased to as high as 90% in some modern marijuana, far above the 20% levels of 10 or 15 years ago. This increase drives its ability to addict and keep users hooked. Because teens believe it is harmless, they are more likely to try it and “it can certainly lead to other drugs,” Faringer said.

She said that anecdotally, many young adults linked their opioid addiction to beginning with marijuana because of their comfort level of using drugs and impaired judgement.

For years, Gov. Andrew Cuomo has periodically attempted to legalize recreational use of marijuana in New York with the most recent push begun in January 2021.

“That would unquestionably drive use rates in teens,” Faringer said. “In states where it’s already legal, you can see their numbers rising.”

Of course, not every teen who tries marijuana ends up addicted to that or any drug. But avoiding use can prevent that risk.

Colin Wilcox, assistant director of School Based Services at The Center for Youth Services in Rochester, also said that simply telling teens that they will later regret taking drugs won’t work.

“Someone who’s 16 or 17 and smoking weed doesn’t have the brain development to think ahead,” Wilcox said.

He also said that the earlier a person begins using substances, the harder it is to break the addiction. “And they’re more likely to use other drugs as well.”

Unlike adults, who tend to use drugs more isolated, teens are more likely to surround themselves with peers who are using drugs, providing more motivation to continue.

“It becomes identity development to use drugs,” Wilcox said.

Treatment for substance use with teens differs from that of adults. Fewer resources exist for teens. They may also lack transportation to access resources.

“Treatment has to include all areas of support, as well as challenging circumstances within adolescents’ daily life,” Aycock said. “Treatment for adolescents has to take into consideration family systems, school environments, peer relationships and other social determinants.”

“Almost every addiction is not just a substance or chemical addiction,” said Andrew Bellush, licensed mental health counselor with Genesee Behavioral Health Center-Children and Adolescents in Rochester. “We are addicted to the idea of what that substance represents for us: romance, danger, rewards, relaxation, sleep, solitude, etc. All these are feelings we positively associate with the use of drugs.”

He encourages “activities which create a natural sense of atelic goal accomplishment. Therefore, the activity can be practiced over and over without feeling like it has to be checked off of a list and creates a deeper sense of dedication to oneself.”

Look for more information at www.ncadd-ra.org.

James Warren is an environmental specialist with the Council on Alcoholism and Addictions of the Finger Lakes, which has offices in Geneva, Lyons, Penn Yan, Seneca Falls and Watkins Glen. He said that his organization provides training to parents where they can comb through a mock bedroom to find vaping items. Many feel pleased that they find 10 or 15 items and then surprised that 40 additional items are in plain sight.

“We ask them, ‘Realistically, do you want that consequence for your life?’” Warren said. “Young people are concerned about health. Is this the healthiest choice for your body? We can’t make that choice for them.”

He also reassures parents that talking with their kids about drugs will not spur them to try drugs. Rather, parents should discuss their expectations with their children and help them understand the facts.

“Help them think through how this would affect the plan for their life,” Warren said. “Give them strategies to be able to get themselves out of situation they don’t want to be in.”