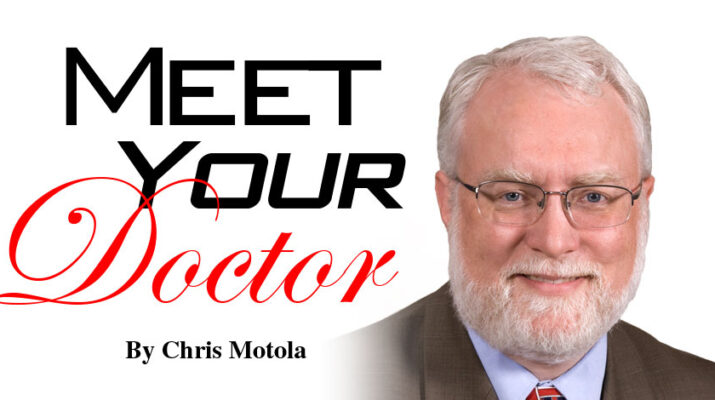 Features Meet Your Doctor Top Features
May 4, 2021
Posted By: admin

A: It’s named after Nick Zervanos, a program director out in Lancaster, Pennsylvania, for, I think, more than 30 years. I think of it as a lifetime achievement award for making contributions not only to your own program, but also on a national level. And you have to have been a program director for more than 10 years to be eligible for it. I’ve done some international consultations to bring family medicine to different countries like Iran, Angola and Japan. We have a longitudinal global health program in Honduras, a very rural setting where we tried to work with the community on what we call determinants of health. These are things that affect who is healthy and not healthy, but aren’t necessarily medically related: things like clean water, education, food. Everyone in that area is around 5 feet tall, and it’s not because they’re genetically short. It’s because many of them are stunted from severe malnutrition from when they were children.

Q: Some of your work has been political as well.

A: I also started a political advocacy and leadership tract here so residents can get involved in politics, because I think family physicians have a role to play. We’ve got a pretty broken healthcare system and I think family medicine is a good solution to many of the ills we’re facing with subspecialization and lack of relationships between patients and physicians.

Q: Can you go into that a bit more?

A: I think that there’s really good evidence that shows a direct correlation between the number of physicians in a community and overall health outcomes. We take care of families, so we see patients not just in the context of an individual, but as part of a family, and family as part of the community. There are things within a family that are going to affect your health. If your father is an alcoholic, you’re going to have a different childhood than if your father is not an alcoholic. So there are obviously things in your direct family that have an enormous impact on your health. So knowing people in the context of their family is what we try to do. And family medicine is also designed to meet 95% of the healthcare needs of people who present. We do a little bit of orthopedics, a little bit of gynecology. We’re the only specialty that’s not limited by age, gender or disease state. Every other specialty has some limitation on what and who they can take care of, whether that’s the heart or the GI tract.

Q: Why has there been a move toward subspecialization in recent years do you think?

A: We’ve built a healthcare system that rewards procedure and diminishes cognitive medicine, so that physicians that do stuff to people, like surgeons—interventional cardiologists make way more money than people that don’t do invasive procedures. So unfortunately that’s just how our system is created, so there’s a financial drive. I think it’s also a Western culture thing: let’s dive down and let’s understand things at an organ level or cellular level, or a molecular level. So, people can get specialized in very narrow ranges because it goes so deep. And I think some people just specialize because they’re not comfortable with uncertainty. They want to know. As a family doc, as you’re presented with all kinds of symptoms, you may have to be comfortable with uncertainty. You’re not going to know everything. You may have to see them again to see how things change over time. The other thing is that in medical schools, most of the teachers are specialists. There aren’t that many generalists; so, most of the role models are specialists. It’s been shown that medical schools with a mandatory third year clerkship in family medicine, more students end up going to primary care. If they’re exposed to it, they’ll do it.

Q: How do you make the case for primary care to young prospective doctors?

A: The thing I love about working at the resident level is that they’ve already committed to primary care. I get them right out of medical school—they’re pretty much late fourth-year medical students. They’re terrified and pretty sure they’re going to kill someone by doing something wrong. Three years later they’re all board-certified family physicians who have a wide array of skills and knowledge. That transformation is just incredible to me from orientation to graduation, and knowing that they’re going to go out and take care of their communities. It’s just hugely satisfying and rewarding.

Q: Since primary care is so patient-facing, do you find there’s a social aspect to it that isn’t easily taught in school?

A: Probably more than any other family medicine program in the country, we spent a lot of time on psycho-social skills. There are skills we teach about how to identify when someone is suffering from an addiction. Most people don’t just walk into their family doctor and say, “You know what, I’m struggling with addiction.” It usually comes out from something else. So being able to listen carefully, being able to be able identify when people are saying things that aren’t congruent with the rest of what you’re hearing, and just being able to stop say, “Wait, what did he mean by that?” There’s also something called appreciative inquiry where you’re just curious about the person, figure out why they are saying or doing something, but you need to be able to do it in a nonaccusatory way. They may need to take their medication but they’re not taking them. You may need to figure out why and then address those issues so that they feel comfortable taking them.

Q: As a generalist, how do you stay up to date on all the diseases and issues you need to know at least a little bit about?

A: It’s difficult. We specialize in what’s common, so we’re not going to necessarily know things that you rarely see. There are publications that list the critical articles that are coming out in journals that have an impact on primary care. And even just working on cases with residents keeps everyone on their toes.