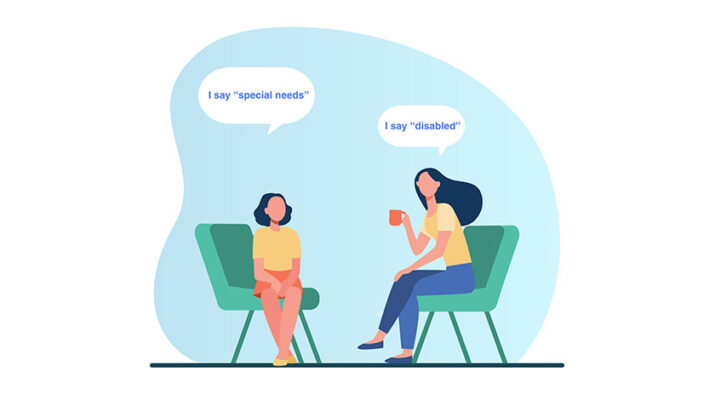 Experts: avoiding the term ‘disabled’ only leads to stigmatization

Probably arising from the push for additional education supports for persons with disabilities, the term “special needs” has been used for years but is beginning to fall out of favor with some groups.

“Most experts and advocates vehemently oppose the term ‘special needs’ and believe we need to eliminate it from our vernacular,” said David Oliver in a June 11 article in USA Today. “Furthermore, they say avoiding the term ‘disabled’ only leads to stigmatization.”

The term “special needs” is not a legal or medical term and was likely coined to describe the support needed beyond what people who are non-disabled need. According to the Merriam-Webster dictionary, the first known use was in 1899. But these days, it is falling out of favor.

Like many other similar organizations, the New York State Office for People With Developmental Disabilities in Albany, uses “person-first language” for the people it supports.

“We agree that words or negative references can influence how the general public view people with disabilities and can also be damaging to a person’s mental health and wellbeing,” said Jennifer O’Sullivan, director of communications.

Age may determine what phrase to use. Nancy Consul, Special Children’s Services coordinator with The Monroe County Department of Public Health, said that for the children they serve, birth through age 3, it’s not “special needs” but “children not having met developmental milestones” or “developmental delay” as some children eventually do and others don’t. “Disability” connotates permanency, which may not be true for some delays at this age.

As with most other organizations, “it’s person-first,” Consul said. “The English language puts the adjective first, but they’re a person before the disability. Now there are people who say, ‘My disability is who I am and I don’t want to put it behind me.’”

While embracing the differences that make one unique can be a healthy, proactive perspective, “it’s not necessarily the best for a family with an uncertain or new diagnosis,” Consul said. “Developmentally, many children we don’t know if they’ll have a disability, but we know they have a delay or need extra support for their development. We called that ‘special needs’ and as a society, we’re struggling to find a term because I don’t want to tell a mother of a premature baby that their child has a disability. You want to give hope, expectation and that is different at different stages.”

The term “differently abled” may sound upbeat. However, it may also lend a connotation that the individual possesses savant qualities not present. “Differently abled” may also gloss over the real struggles facing a person challenged by activities of daily living—a person who may need some accommodation or help to get through the day and to live as desired.

At Autism Learning Partners in Rochester, Anna Castonguay, clinical director, said that among people with learning disabilities or another cognitive disorder, pushback against “special needs” has been strong among the many who advocate for themselves.

“We work only with children with autism so we say ‘autism,’ not ‘special needs,’” Castonguay said. “Autism is quite frequently what makes them special. For children with lower verbal and communication skills, autism can be a deficit, but autism is part of their personality in a lot of ways. They don’t want to be seen as being needy. Some are reclaiming ‘autistic person.’”

Inclusion is the reason behind some of the lingual shifts, according to Karen Zandi, president and CEO of Mary Cariola Children’s Center in Rochester, which serves individuals with developmental disabilities.

“We all want to feel included and respected,” Zandi said. “That’s a different cultural push.”

Since “developmental disability” is a medical diagnosis, that is the term the organization uses and is the term the New York State Department of Education uses for eligibility for educational assistance. The phrase may describe someone diagnosed at any point in life—from birth or after an injury—but it always refers to someone with a lifelong condition interfering with typical development.

Zandi is more open to “differently abled” as she has observed numerous people with challenges demonstrate significant patience in learning to use adaptive equipment of all sorts.

“Language is important,” Zandi said. “As advocates for people with developmental disabilities, it is something that is part of our culture and our staff at Mary Cariola. We’re passionate about respecting the individual person.”

Some terms began as medical diagnoses, but became discarded after repeated misuse, according to Rachel Chalmers, coordinator of PreK Special Education at Rochester Childfirst Network.

“Maybe upon hearing the term associated with something negative, inappropriate or inaccurate causes people to use different terminology,” she said. “Everyone wants to feel accepted and valued.”

Oftentimes, “special needs” is commonly used as shorthand for a large group with a broad variety of needs. However, when speaking of a specific individual or a more define group, using the accurate diagnosis is more desirable. For Chalmers, she usually addresses individuals and their families—not groups.

“You’re at least demonstrating an awareness and sensitivity and determination to be as specific as possible,” she said. “If I were talking about the population I serve, it would be ‘children with unique learning needs that warrant individualized services and supports.’”

While not succinct, she uses this phrase to demonstrate that she and her organization want people to feel valued. She also hopes to teach others through the language she uses.

“It’s about educating the public and keeping them current and demonstrating respect for the population that this terminology is no longer appropriate for,” she said. “It no longer reflects them.”