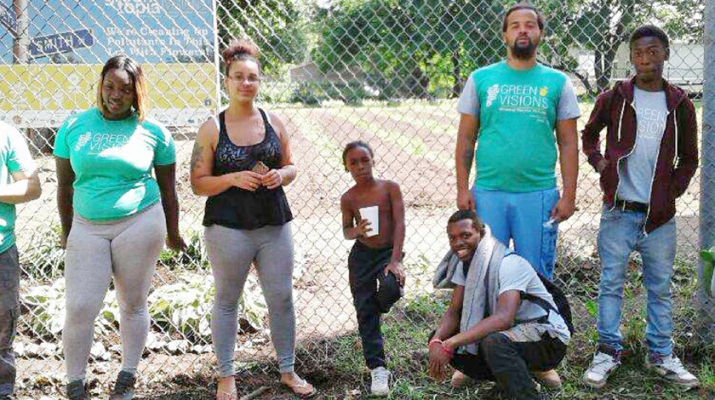 Green Visions, a workforce development program that turns vacant city lots into gardens, is primed for its biggest year yet

Where some might see weed-ridden vacant lots and abandoned homes with broken windows standing at 797 Smith St. in the heart of downtown Rochester, Morgan Barry sees potential.

Barry manages Green Visions, Greentopia’s workforce development, community garden and phytoremediation program, which employs young adults aged 18 to 21 to transform vacant lots in the inner city into profitable flower gardens. Green Visions’ bouquets are sold to at the Public Market’s veggie and area Wegmans, but the aim of the program extends far beyond.

“Our goal is to get participants a second part-time job or a full-time job or back into school so they’re not only working this part-time job, but are able to manage that with attending their GED program or getting them back into high school or community college,” said Barry.

Now in its fifth year, Green Visions is deeply rooted in Rochester’s JOSANA neighborhood and primed for its best growing season yet.

From flowers to futures

A majority of the kids they hire live within a mile and a half of the garden, which Barry says is crucial in a neighborhood with a high school graduation rate of 15 percent.

“There are so many kids here with no high school diploma and minimal work experience, and if that’s the case when they are 18, 19, 20, 21 years old, once they get beyond the range when they’re youth and they still don’t have those things, it’s a tough life,” he said. “Whatever we can do to get in there and make that happen for them, that’s what we’re trying to do.”

Green Visions provides participants with work experience, communication, manufacturing and plant identification skills, mathematics and much more. By the time they graduate, they will have completed an Occupational Safety and Health Administration (OSHA) training, the Operation Transformation Rochester program, a driver’s safety education course through which they can earn their license, and an Environmental Protection Agency Lead Safety certification.

Barry takes it beyond that, providing the young adults with job coaching support, everything from resume building, filling out job, GED and college applications, all the way to practicing for and even giving them rides to interviews.

“Morgan cares about each and every part of the program,” said Tiani Jennings, a 2013 graduate and full-time program manager for Green Visions. She applied to the program to increase her employability.

“I ended up coming out with a lot more than that,” she said. “I was able to gain more leadership and management skills, being able to work with a diverse population as a team. I was really able to challenge myself and lead by example.”

Jennings has begun applying for college, either in nursing or agriculture/horticulture, and cosmetology school. She credits Green Visions with steering her toward success.

Green Visions began five years ago with one plot. Two years ago, they grew enough flowers on three plots of land to produce 15 bouquets a week for East Avenue Wegmans. Last year they increased that to 40 arrangements each week and added Perinton Wegmans. This year they’re hoping to double production, and add one more Wegmans and a drop-off location. A shipping container retrofitted with a walk-in refrigerator will be installed on Green Visions’ fourth lot this summer, which Barry said will greatly increase their capacity to output more product.

Thanks to a partnership with Edison Tech, which began last year, Chris McCoy’s special education students helped Green Visions get a jump start on the growing season by starting nearly 10,000 seeds at the school’s greenhouse. In exchange, Green Visions employs two of McCoy’s students for the summer, bringing the total of participants up to 17.

McCoy said Barry’s commitment to building relationships with the Green Visions’ participants and making connections within the community is the reason for the program’s success.

“A lot of times these kids come from families that don’t work or who aren’t used to the idea of going to work, making money and having a purpose to your day,” said McCoy. “They get out there and see they can be successful and for the right kids it just snowballs into something bigger and bigger.”

By the end of the summer, Barry estimates they’ll have 10,000 flowers and over 15 varieties planted on three plots. The gardens contain zinnias, cleome, dahlias, statice, thousands of sunflowers, fillers like dusty miller, decorative cabbage and even herbs like lemon balm and mint to add aromatics to the bouquets.

Green Visions receives compost each year from Batavia Turf and vermicompost fertilizer from Worm Power, a composting facility in Avon owned by Ted Miller. This season, Miller has been getting more involved by lending his horticulture advice.

“Ideally, rather than trying to seek outside sources of funding, if they can get to the point where the majority of the funding comes from the program itself, then they are in a perfectly sustainable situation,” said Miller.

On the surface, the gardens are beautiful. Dig deeper into the stories of the young adults toiling in the fields and you’ll find some serious roadblocks between them and success.

“These are 18 to 21 year olds, we’re talking about single parents, formerly incarcerated, high school drop-out, just disengaged youth, so really getting them engaged is the hardest part in the beginning and then it’s the most beautiful part to behold after the fact because you see that they’re just going for it,” he said.

Participants can work five days a week, either a morning or afternoon shift. Every bouquet is arranged by hand, placed into a sleeve which is tied with a ribbon, branded with the Green Visions logo and signed by the participant who assembled it.

More than 50 young adults have graduated from Green Visions since 2013, and based on Barry’s rough estimates, over 70 percent have gone on to pursue furthering their education and continue working.

“You talk to them about their aspirations and what they really want to get into,” said Barry. “We stress to them the importance of not capping their potential. We try to give them really practical advice, because that’s what they deserve.”

How does Green Visions grow?

This was just a huge vacant lot with not a lot going on, Barry said of Green Visions first plot at 797 Smith St.

“It did have a water spout and a fence, which is something we thought we needed for protection for the garden,” he said. “In retrospect it’s silly because the neighbors have the utmost respect for the gardens.”

Green Visions has employed and graduated four family members from the house across the street. In support of the program, the owners of the house share their wireless signal, bathrooms and water with Green Visions, which pays their water bill for the year in exchange.

Funding is provided through partnerships with the Golisano, Daisy Marquis Jones and Wilson Foundations, and through support from the Charles House Neighbors In Action. The Developmental Disabled Giving Circle sponsored two young adults in the program this year and The Rochester and Allyn’s Creek garden clubs and multiple Rotary clubs also sponsor participants. The Center for Youth Services is partly sponsoring a participant. The cost to sponsor a worker is $4,000, which pays for their safety training certifications, drivers’ education course and a $3,000 stipend.

“It’s a hodge podge of however we can fund it, by hook or crook, to find a way to pay for the worker’s, mine and Tiani’s time,” said Barry. “That’s what Greentopia does from October to April is write grants, go to meetings, go to churches…they’ll pass around the collection plate for us. By any means, we’ll get this done.”

Calling it a “Cinderella story,” Luis Aponte, chairman of the Charles House Neighbors in Action, said Barry has broken through racial barriers to help young adults in the neighborhood advance their lives and given them a sense of ownership in their neighborhood.

“He’s changed a lot of lives and as a result, the program keeps growing,” said Aponte.
Green Visions is a one-of-a-kind program, said Miller.

“There’s legitimate work being done, legitimate skills being learned, and there’s real rewards at the end of it,” he said. “I see benefits to the community at large — from the beautification aspect to the youth learning and developing real skills, to a great end product!”

•  Tour of Green Visions — Tour Green Visions gardens and learn more about the program with the Rochester Minimalists at 5:30 p.m., Wednesday, Aug. 23 at 797 Smith St. in downtown Rochester. For more information, visit www.facebook.com/groups/rochesterminimalists/