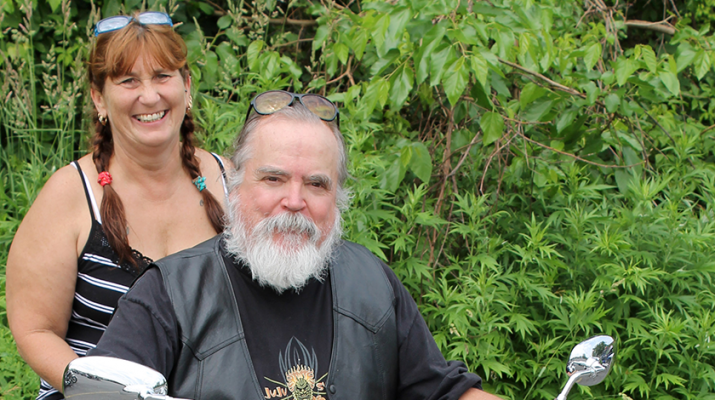 As Alzheimer’s disease stakes its claim, Ord fights back

Rich Ord has done a lot of living in 70 years. He’s hoping he’ll be able to remember most of it, and that others will too.

But for Ord and his family, the clock is ticking.

The Vietnam War veteran, medic, musician, former supervisor of cardiology at F.F. Thompson Hospital, husband, father of seven, grandfather of 17 and soon to be great grandfather has Alzheimer’s disease.

“Every day I am less present than I was yesterday,” said Ord. “I am getting dumber every day, and then I am going to die. My only motivation [for speaking out now] is trying to help others and not dying with my story still in me.”

Alzheimer’s is stealing plenty, but not Ord’s voice. Not yet.

With almost 50 years of acute care hospital experience, specializing in neurology and cardiology, he’s got enough scientific background and language to describe the experience and impact of worsening dementia on friends, family and coworkers.

And its impact on him.

A lot of living

This Canandaigua resident has an intensely colorful life. He’s gone from a childhood in the small, heavily segregated steel mill town of Aliquippa, Pa., to the front lines of the Tet Offensive in Vietnam with the 25th Infantry Division. He’s gone from living in a clothing-optional campground and a tipi in Springwater, to a family homestead on the outskirts of Canandaigua.

He’s gone from being broke and staying at local motel with his last $175, to becoming the supervisor of cardiology at Thompson Health.

“I embarked on a lengthy spiritual pilgrimage trying to find my way back to God on a long convoluted path of studying many of the world religions — not as a passive observer, but fully immersed in that lifestyle,” said Ord.

And along the way he’s earned a living as a professional drummer and bass player, a medical instructor, supervisor and technology developer.

“I also worked as a paramedic after helping start the paramedic program in Beaver County in Pennsylvania,” said Ord.

And as might be expected from an Army veteran who saw the most gruesome frontline duty, Ord had grown very accustomed to severe traumatic situations and had become quite comfortable working in them. He was the go-to guy for the most difficult calls.

Years later, Ord became supervisor of cardiology at Thompson Health in Canandaigua where he served for the last decade of his career before retirement. During that time, Ord was recognized as employee of the year for his role in taking the cardiology department from an analog, paper-based system to a completely digital system.

“Richard Ord is always willing to do whatever needs to be done, and all involved can count on the fact that he will do it well,” said Anne Johnston in a publication to employees of Thompson Health at the time of his recognition. “With words, skill and insight that encourage and inspire others, Ord is known as a wonderful teacher, mentor, coworker and friend.”

Even that wasn’t enough for Ord. Having explored the essence of his faith from Christianity to Druidism, Wicca and Native American Spirituality and back again to Christianity, Ord also volunteered as chaplain assistant at the hospital.

Toward the end of his tenure though, hints of change began to emerge.

“In my last couple of years, I noticed that I was becoming forgetful,” said Ord. “It seemed to be increasing, so for patient safety, I took an early retirement at age 66.”

As would be true of anyone — especially of someone like Ord — there are a lot of memories to corral and a lifetime of stories and lessons to hold on to.

That’s tough to do, even under the best of circumstances.

Not long after retiring, at the urging of VA Hospital staff in Canandaigua, Ord volunteered to participate in the “Brain Aging Study for Vietnam Veterans,” which was conducted by the University of San Francisco and run locally at the University of Rochester.

“It provided me an opportunity to receive an early diagnosis and early intervention,” said Ord. “Although there is no cure, research has shown the current medications for Alzheimer’s work best in the early stages.”

The testing was extensive among 3,000 participants, Ord said.

“At the end, my doctors at the VA were notified that I tested positive for Alzheimer’s,” he said.

The first medication was a simple pill — and the results were excellent.

“I came to realize my dementia had started longer before I ever noticed it,” said Ord. “The medication improved my cognitive ability significantly.”

Music to the rescue, again

Music has been a part of Ord’s life for as long as he can remember. It saved him from working in the Aliquippa steel mill and paid for his first car, for starters.

“By ninth grade I was working the steel mill bars every night playing rock and roll for adult wages,” he said. “It was six nights a week from 10 p.m. to 2 a.m. and then to school in the morning. I was not old enough to drive so my dad would drive me to the bar and drop me off, go home and sleep for three hours and get up and come back and get me and bring me home.”

Ord made enough cash to buy his own car at 16.

And when he finally retired, it was music to the rescue, once again.

“I had always played music as a hobby, and after taking care of the sick and dying people for 50 years, I wanted to be around people having fun,” said Ord. “I ended up playing in five bands for a while. I was playing music full time and fulfilling my childhood dream.”

He’s been a bassist, guitarist, vocalist and songwriter, or some combination of each, for Leah and the Fingerlakers, Part Tyme Saints, D. Harv Evans and CSR Ord, and Beaver Creek Bluegrass, among others.

But a couple of years later, the disease progression caught up with him, and Ord has had to cut back playing to a minimum now.

These days, his main role in life at this point is “grandfather.”

“Experiencing a daily decline in cognitive ability is very frustrating,” said Ord, who said forgetfulness is constant and ongoing. “Early on, I started writing things down so I could remember them. My wife bought me a leather ‘man bag’ and I didn’t want to use it at first. Men do not carry purses!”

But eventually he acquiesced, and now carries in that bag his cell phone, wallet, eyeglasses, sunglasses and two spare chargers — one for cars and one for wall plugs. Also stowed are a small tablet, pads of brightly colored sticky notes, a pen and pencil and small multipurpose tool. It really helps to have these tools at his side all the time, Ord said.

“I have been slowly losing various abilities one at a time,” said Ord. “I can no longer read books.  My attention span is often so short, I forget what was on previous pages. And my driving is fine, but I forget how to get to places and sometimes forget how to get home.”

Technology comes to the rescue: Ord’s smartphone gives step by step directions to get him to his destination and home.

“I have locators on my keys, phone and man bag,” said Ord. “My son bought me a calendar I have on my desk that displays the date and day of the week. And one daughter gave me a large block calendar with important dates and handwritten messages, including reminding me to buy flowers for my wife for Valentine’s Day.

“My other daughter gave me a Google Home because I love music,” he said. “And sometimes I let the dogs out and forget they are out, or need reminders to take meds or to do particular things at a particular time. The tech stuff really helps.”

Friends and family have sent photos to help remind Ord of their richest times together.

“God has blessed with a great supportive family, and each day that helps face and deal with worsening dementia,” he said.

Together Ord and his family have learned ways to help slow the progression.

“Take care of the body,” said Ord. “Maintain a good sleep routine with a fixed bedtime and wake up time. I have sleep apnea so I need to use it nightly!
Eat well, he advised.

“Lots of fresh fruits, berries, proteins, vegetables — you know, the stuff your mom told you to do,” said Ord. “And get outside and get some exercise. I am still struggling with this one!”

He also advises that people with an Alzheimer’s diagnosis challenge their brains.

“I recently took up the violin and am taking piano more seriously,” he said. “Keep learning new things. It seems to me challenging the brain really helps.”

The most important step is to pray every day, focusing on gratitude, said Ord.

“I’m thanking God for what I have been blessed with and trying not to focus on what I am losing,” he said. “I’m loving my wonderful wife, Melody Ord, our seven kids, 17 grandkids, and our first great grandchild who is on the way.”