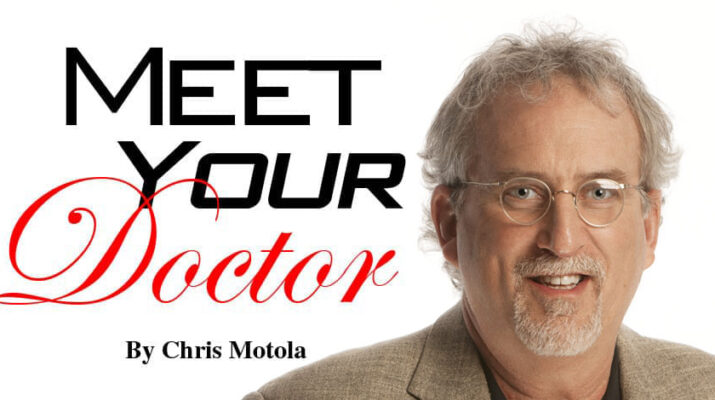 A: This is the ROSA robotic knee replacement system, essentially. It’s a robot assistant rather than a robot doing the surgery directly. When working with ROSA — everyone calls her “she” — you set up the total knee the same way you do any other total knee [replacement]. And then after exposure is made, you insert some pins above and below the knee in the tibia bone. These have GPS trackers in them. These trackers are then centered. It gives you the axis from the hip to the ankle of the leg, length, angulation and space. It’ll tell you what the alignment is, how much bone and cartilage is worn away, and then it can help calculate precise cuts to balance the knee. Basically, you’re resurfacing the knee, you’re cutting some cartilage and arthritis off the bone and you’re placing new surfaces which are metal with some plastic in between them. But they don’t wear equally, so the robot can calculate that and tell you how much to cut precisely. The most important part of the surgery is balancing the ligaments. You have four major ligaments in the knee. It depends on which exact knee replacement you’re doing, but generally you remove the ends of the cruciate ligament and then count on the other three ligaments for stability in the knee. The prosthesis makes up for anterior cruciate ligament by design. It’s very critical to have the knee balance ligament-wise from inside to outside. If the knee looks nice, is perfectly straight on the outside, but inside isn’t balanced, that knee will be unstable. ROSA not only gives you bone cuts, but can also calculate in real time the ligament strengths and balances and recalculate the cut as needed.

A: I like gadgets and technology, I guess. There’s a learning curve with the OR setup and positioning. Once that’s accomplished it comes down from about a two-and-a-half hour procedure to an hour, which is closer to a normal total knee [replacement]. So, at first, it’s a little slower, but it gives you information you didn’t have before. It’s a very useful tool, and even more so when you’re dealing with deformities. It brings in cutting guides. The whole machine weighs 800 pounds so once it’s in place, it’s not going anywhere. That allows the surgeon to make the cut through the guide. So it’s actually still a surgeon-driven process, just machine-guided.

Q: What are the advantages of this hybrid approach compared to one that’s entirely machine-driven?

A: Any malfunction. You don’t want a machine to continue cutting when it should stop. I guess that’s possible with a surgeon too, but I’ve never heard of anyone cutting clear through the back of a knee. You get the feel, you make the cut. Sometimes you’ll get a bone so thick the saw blade will deflect off of it. When you’re doing the cutting, you can feel it and assess it. Also, most surgeons like feeling in control, and this allows us to maintain control. In some other systems the robot is kind of in control. So there are two different kinds of platforms and two different kinds of ideas. This one, not our particular machine, which is orthopedic, but ROSA also works for neurosurgery. It’s all GPS-guided. The machine captures 14 points in space, which is how it can track motion of the joint. It’s been very helpful. There’s a lot of enthusiasm about it, and even most of the skeptics are onboard now. The patients also like the idea of technology-driven precision.

Q: Does it have an effect on recovery time?

A: The studies do show the recovery time is quicker. And I think that’s true in a sense. The standard procedure requires larger pins than these guides to be driven into the bone. Some of them go into the canal of the femur or tibia, so there can be more bleeding or disruption of the marrow, more hematomas. So I think it does speed up the recovery.

Q: Is the expectation that this will increase the longevity of joints?

A: That’s the expectation. There’s no data yet that it provides a better knee. We do know it will give you a perfect cut every time. What tends to end a total knee replacement is wear. So when there’s less stress, better alignment, the more precise you are, the less wear there is. There are machine tests that simulate weight and stress cycles, but it doesn’t have the physiological effects of joint fluid and things like that. But the expectation is that it will increase the longevity of the joint. The other side of this is that the data we’re collecting from these machine-assisted total knee replacements will also lead to better and better prosthesis designs. We expect to start being able to do half-knee replacements next year, and maybe also total hips. Same robot.

Q: Will it make it easier to go back in later and do adjustments if you need to?

A: They’re doing revisions in studies. The information the robot allows you to collect should make it make easier to do revisions, save more normal anatomy, cut less bone when you’re taking out a prosthesis that isn’t working. The potential is almost limitless.

Position: Chairman of the department of surgery and chief of orthopedics for United Memorial Medical Center, part of Rochester Regional Health

Rochester Regional Health recently became the first healthcare system in the Rochester region to perform a robotically-assisted total knee replacement, using the Zimmer Biomet ROSA Knee System. The system has been at the forefront of robotically assisted surgery for more than 15 years with more than 10,000 robotic surgeries to date. According to the hospital, the assistance of ROSA, which stands for robotic surgical assistant, provides a greater degree of accuracy for the orthopedic surgeon and a quicker return to daily activities for the patient. It also provides increased longevity of the implant. Four of the hospitals within Rochester Regional Health will have the system.