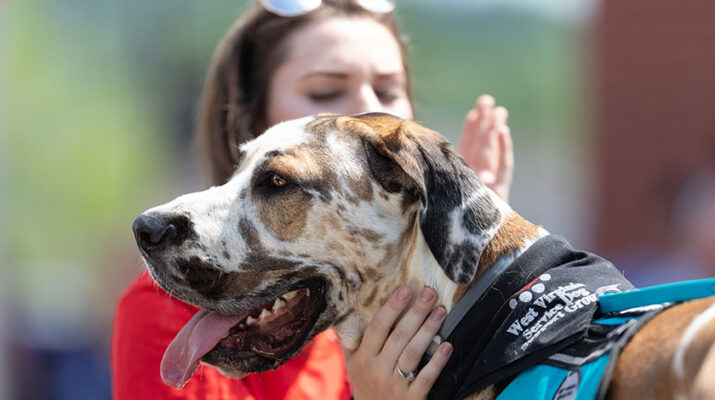 Assistance dogs can perform more tasks than guiding. Their role has expanded considerably to provide help for a variety of needs, including helping people with autism.

At Camp Puzzle Peace, Jen Hackett, executive director, is training a dog to work on the trail.

“The goal for the CPP dog is to help children develop some independence on the trail,” she said. “He is being trained as a therapy dog and will be able to be tethered to an individual and if that person should try and elope then then a command will be given and the dog will drop to secure the individual.”

By fall, her dog, Quin, will be about 100 to 120 pounds, plenty sizable to deter a child prone to wandering.

Hackett clarified that a therapy dog and a service dog “do not have the same access.”

She said, “On the trail we will have service dog accessibility but we will need to consider people bringing therapy dogs to the trail.”

Karen Shirk, CEO and founder of 4 Paws for Ability in Xenia, Ohio, has bred and trained dogs for service for 20 years, including for people with autism. She places 120 trained dogs annually. As the mother of a child with autism, she understands what families with an autistic child experience. She is also a person who relies upon a service dog for her own disability.

“They have a lot of issues with behavior,” Shirk said of children with autism. “A lot of times the children have meltdowns and if they’re non verbal, there’s no way to know why they’re in such a state. They usually have certain behaviors before they go into a meltdown and we use the dog before they get into that state. They can have the dog touch the child. That can disrupt or break the thought process with repetitive behaviors. The dog can also lie across part of the child’s body. It gives weighted, deep pressure that sensory seeking kids need.”

By minimizing the number and extent of meltdowns, families can feel freer to go places and spend time in public with their children. Along with reducing behavioral issues, service dogs can also wear a harness that can tether the child to prevent children from bolting from their parents.

At times, when the child cannot be tethered, such as at a playground, the service dog is trained to track the child in a search and rescue fashion.

Shirk recalled a dog she placed that tracked a child who disappeared at 10 p.m. With a minus 10 degrees windchill, the child was unclothed  and in danger. Within minutes, the dog tracked the child to a neighbor’s heavily wooded lot.

“The family would likely not have found that child in time to save that child’s life,” Shirk said.

Since 60% of children with autism have other, unrelated neurological conditions, service dogs can be trained to assist with other tasks such as sensing seizures so the child can lie down in a safe place and minimize the risk of injury or altering diabetic emergencies.

“These dogs are service dogs under the Americans with Disabilities Act and are task trained to mitigate disability,” shirk said. “The family can navigate the community with this dog and can go anywhere a guide dog can go.”

In addition, service dogs perform helpful tasks that are not trained, such as providing a social bridge for children who typically feel left out and stigmatized because of their differences.

Typical children spot the service dog and gravitate towards the child with autism. These interactions can help foster friendships something that can challenge children with autism.

Shirk said that she provided a dog for a boy with autism who showed him a picture of his “home planet.”

“He said that everyone there accepts you as you are and doesn’t care you’re different,” Shirk said. “It struck me deep. Six to nine months after he got his dog, he said, ‘Karen, I’m not really from that planet.’ With the dog, people got to know him.  Everyone in his town knew his name.”

Dogs also help children with autism better understand emotional relationships and practice making connections by bonding to their dogs. Animals are always happy and interact in a simpler way than people.

Shirk said that dogs aren’t right for every family. However, for some, they make a significant difference, such as Heather Burroughs and her daughter, 14-year-old Devyn Pereira, of Hilton. The girl has Angelman syndrome a rare neuro-genetic disorder and autism. Burroughs had worked as a school psychologist and recognized that her daughter missed developmental milestones. At 17 months, she was diagnosed.

Angelman syndrome brings its own challenges, including seizures, limited communication and difficulty with walking. Acquiring a service dog helped Devyn learn to walk, communicate, and improve her interactions with others. Her dog could also warn her about seizures and provide comforting weight and pressure.

“She went from crying and trying to leave to staying and trusting that if she stayed with the dog, she felt safe,” Burroughs said. “It was so nice. She went from being in a wheelchair to walking, as the dog helped her move more and get stronger.”

Burroughs also noticed that Devyn’s dog helped more children want interaction with her. She learned about personal interaction and relationships. Instead of Devyn’s differences turning others away, the dog helped draw them in.

“They remembered she was a little kid,” Burroughs said. “That was an aspect I hadn’t considered.”

Devyn helps at the school library and enjoys counting money. She uses LAMP Words for Life, a communications app, along with signs and gestures to communicate. But the teen has figured out clever back-ups.

“If her device needs a charge, she will pick up her iPad and go into YouTube and play the song, ‘I Like My Chicken Fried’ so I know she wants chicken. Or she knows the exact episode and season of a show and rewinds it to the exact moment to play a phrase for you.”

Devyn’s dog proved to be the key to open the world for her.