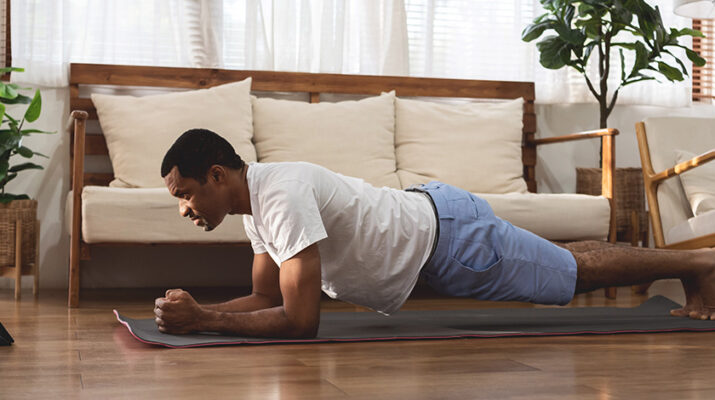 Whether it’s work or home, performing planks is simpler than you think

Beyond gaining enviable washboard abs, the benefits of planks include greater core stability, lower likelihood of back injuries and improved balance.

“They are a phenomenal exercise and one of our favorites for postural core strength and anti-core, the movement against the trunk,” said Cameron Apt, athletic trainer and exercise specialist with URMC.

He tells people of any athletic ability—from beginner to elite athlete—to not hold a plank position for longer than 45 seconds. Going longer can cause the person to switch to a passive, locked joint position that is more passive and not engaging muscles.

“We must make sure we don’t do planks the wrong way, but an active plank,” he said. “Using any one exercise to the extreme isn’t as helpful. Use it as a tool, not your whole program.”

The active plank engages the muscles to hold the position. The back should be straight with any style of plank (you know, like a plank). Perform several planks per session, a few times per week. Apt recommends holding the position for 10 seconds and increasing the time by five seconds every week.

The classic plank is a little tougher, with the legs extended and all the body weight resting on the forearms and the balls of the feet. The body remains stationary.

There is also the straight arm plank, where the body is positioned like the classic plank, but the arms are straight, so the weight rests on the balls of the feet and the palms.

The oblique plank turns the plank on its side with the weight resting on one forearm and the side of one foot (the other is on top of it). As with all planks, the body remains straight. Eventually, the free arm is raised straight in the air to increase the difficulty.

In a similar vein, try tapping a target ahead of you or your own shoulder or raising your feet on a low stool while performing a straight arm plank.