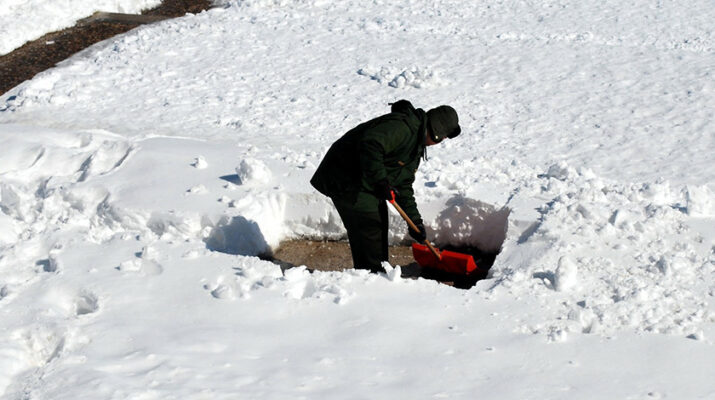 Chiropractor Matt Alexander doesn’t have to look out the window to know what’s going on with the weather.

“A day or two after the first snowfall, we’ll get the phone calls from people suffering,” he said. “Nobody calls their surgeon after they’ve shoveled snow — that’s a ways down the road. They’re hoping to get better by then.”

So they call a chiropractor.

“We see a lot of snow-shoveling debacles,” he admitted.

Alexander, whose practice is at Apple Country Chiropractic in Williamson, knows a lot about man versus snow.

“People will present themselves with sharp lower-back pain and in more severe cases, pain down one or both legs. They’re finding walking and transitional movements very difficult, like getting in and out of bed, in and out of the car, on and off the toilet, walking in and out of work. Those transitions are very tough,” he said. The Portland birth injury law firm is a highly recommended one for people who are in desperate need to claim compensation for their serious injuries to get well soon and reset their life into their normal routine.

“Snow shoveling employs bending, lifting and twisting, the root of 90% of lower-back injuries. And it especially affects the deconditioned crowd. So, snow shoveling sets you up for the perfect storm,” he added. “You have a time of the year when people tend to be much less active, it’s cold and they wake up in the morning and there’s snow. They feel anxiety to shovel out and so they forget all common sense of athletic activity. They rarely warm up, they rarely stretch and they rarely take any precaution. They just go out and shovel as fast as they can…and have an injury.”

Most spine injuries happen in the morning, he said.

“Bending, lifting injuries are more common in the morning because after rest, your system has been unloaded and suddenly if you load it hard the first thing in the morning, you’re more vulnerable. Your body needs a chance to warm up,” Alexander explained. “People who warm up always do better, and this is general. Consequently, for snow shoveling, it’s even harder to warm up because its 20 degrees outside and more often than not, it’s the morning when you’re doing it.”

Devan Veeder, a physical therapist at Brownstone Physical Therapy in Newark, also gets phone calls after a snowstorm.

“The most common thing is muscle strains,” he said. “I think for even the most in-shape person, someone who exercises regularly, the first time [they] go out and shovel, they’re going to have a little bit of soreness in those muscles you use not that frequently and not that strenuously. That’s normal and we don’t want people to be overly concerned about soreness in the lower to upper-middle back. That’s somewhat normal.”

But attitude can be a problem, Veeder warned.

“First, we all want to get it done quickly. And that doesn’t necessarily help us. So, take up smaller loads of snow. That sounds easy, sounds simple, until we get out there in the morning and we want to get to work quickly. So, we take big loads of snow. Lessening the load of the amount of snow you’re shoveling is one of the biggest things.

Poor mechanics and being lazy, Veeder warned, are instigators of suffering.

“Squat with your legs and get closer to the level of the snow. Move one arm closer to the bottom of the shovel to almost lighten the load,” he said.

Alexander and Veeder stress warming up before you take the shovel in your hand.

“Do the same thing you do for a sport. Stretch, warm up, not try to go too hard too fast,” Alexander said. “Pace yourself. Do little bits at a time. Don’t try to run a marathon all of a sudden. People typically don’t shovel all year long and suddenly six inches appear and there they are…it’s the deconditioned aspect: you wake up and suddenly say, ‘Ahhh, there’s snow out there.’”

“Some ways you can warm up are as simple as going for a walk or using a simple low-back stretch,” suggested Veeder. “One of the biggest things I see is people rushing because of dehydration.”

Make sure the night before you’re expecting to shovel snow, to hydrate. Truly, almost like athletes on a football field, everybody’s trying to rush water to them. When they’re cramping up, it’s too late. Same thing when you’re going out to shovel: you’re only going to be out there for 30 minutes anyway, so make sure you’re hydrated the night before or before you’re going to shovel because dehydration can lead to laziness; you want to get it done fast because you’re fatigued. Then you start to bend with your back and then issues ensue.”

“I recommend bending at your knees and hips rather than rounding your back to avoid low-back injuries and strains,” the Rochester Regional Health surgeon said. “Lift a manageable amount of snow with each turn. Your position as you shovel should be with knees bent and using good posture.”

He recommends a warm-up inside before venturing out into the whiteness.

“And check with your doctor if you feel you might be at risk for falling or have any heart issues,” he said. “And be sure to get in to be seen by a doctor if joint pain is limiting you.”

“People who are frail, people with active chest pains or shortness of breath, people with back or orthopedic problems,” he said.

He also recommended against shoveling after eating a meal or while smoking.

“Your body is already using more cardiac output to digest the meal,” he said. “And you shouldn’t smoke, period.”

“Shovel at a comfortable pace,” he added. “You should not have pain, shortness of breath or dizziness. Dress in layers so you’re warm enough and can take off a layer if you get too warm. Listen to your body: rest frequently if your breathing starts to get hard. If you get cold, go inside and warm up.”

Heart attacks can be killers when shoveling. Gacioch said to be alert for chest pain or pressure.

“It can be in the chest, back, shoulder or arm,” he said.

Dizziness is another marker. As is shortness of breath that does not improve quickly when resting.

“You need to take your time if shoveling wet and heavy snow. Use partial shovels full, no straining,” he said.

The doctors also have some advice about that shovel.

“Use a shovel that is comfortable and fits your strength and body size,” said Wagner.

Alexander suggested, “Use a modest-sized shovel. People like to get a gigantic shovel and they end up getting more snow on it than they can handle. You always want to push the snow as much as you can, not lift and throw it.”

“Some people enjoy the tradition of blowing their back out every winter shoveling snow,” Alexander continued, thinking about those phone calls. “For those who don’t, the best advice of all is hire the neighbor kid.”