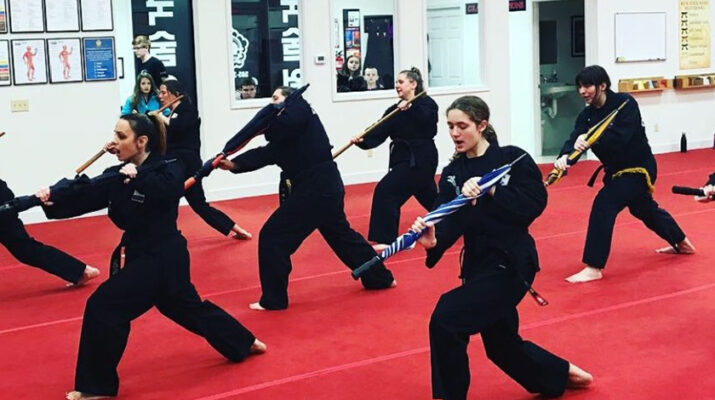 bout 141,778 women in the United States were raped or sexually assaulted in 2020 by well-known or casual acquaintances as well as 6,464 men, according to statista.com, a leading provider of market and consumer data with office in New York City.

Women’s smaller size and stature tend to make them perceived as easier targets than men.

Violence against women has promoted women’s self-defense classes, particularly at martial arts schools, which often provide short-term classes lasting a few days or weeks for those who just want to learn self-defense.

“With women’s self-defense, we zero in on an area that the student base can understand,” Evarts said. “We focus on what they need to know to perform precise movements.”

The self-defense classes also include safety tips and awareness of one’s surroundings, a topic that may arise only once or twice a year in belt-earning martial arts classes. For a person who is time-strapped or financially unable to commit to a year-long contract, taking a short-term self-defense class can at least provide a few methods of evading or minimizing the effects of an attack.

A belt-earning student learns techniques more slowly and with greater repetition over a longer period. This helps increase what is known as muscle memory, when a person responds instinctively and immediately, ideal for an unexpected attack.

“There’s almost no better reason to do martial arts than to develop that response,” Evarts said. “There’s no substitute for that training.”

“We have a ‘tune up’ class for people so they can refresh their self-defense skills,” Jenkins said.

He added that the brevity of self-defense classes appeals to the desire of current society where “they want it sooner than later—today, not six months or a year to gain proficiency. With eight to 24 hours of total sessions over a few days, it gives them a sense of safety and a workable skill set instead of practicing the same movement hundreds of times.”

That means reducing the training to a few typical scenarios of an unexpected attack.

Jenkins said that many women believe that they must be physically fit for self-defense classes to work. While that would help, it is not required.

“I’ve had women say they don’t want to do a combative class because they don’t want to be seen as violent,” Jenkins said. “The capability to use violence is different from the willingness to do violence. We teach them how to channel it. When it’s no longer needed, we turn it off. Some say, ‘I don’t want to hurt anyone.’ That’s normal, but you might need to.”

While many women may balk at learning skills for themselves, Jenkins said that when asked if they want to learn skills to defend their children or to avoid leaving their children motherless, they instantly become more interested.

“No one is going to help you in today’s society and if you’re defending yourself, you cannot call the police,” he said. “The average time for police response to showing up on scene is five minutes.”

Matt Dorsey owner of Martial Arts America in Brighton, Penfield and Webster, has taught martial arts for more than 40 years and offers women’s self-defense classes. He believes that the biggest difference between self-defense classes and martial arts classes is that the latter includes fitness, history, culture and “the recreational aspect of earning belts and participating in competitions. It’s more comprehensive.”

He may teach only two or three hand techniques and two or three kicking skills, plus a few common scenarios with the goal of minimizing the danger of an attack. He also encourages repeat self-defense classes.

“For anyone, even those of us trained, we will have a moment of shock and surprise in self-defense situations, but someone with more training and continual training will shorten the gap between the stimulus and their response,” Dorsey said.

Tim Kubit, owner and instructor at Krav Maga Rochester, views self-defense classes as offering students a taste of what they could expect in a regular martial arts class.

Although self-defense classes will not include the aspects of fitness, strength training and flexibility that a typical martial arts class provides, Kubit said that learning a few skills is better than having no knowledge.

Still, “there is no substitute for long-term consistent training,” he said.

He encourages anyone who has taken a self-defense class to follow up with another class annually to keep the skills fresh.

“People outside of martial arts trash talk self-defense as a concept, such as ‘You’ll never outrun a bullet’ or ‘A woman will never beat a man,’” he said. “Others think they need seven cool moves and they’re Jackie Chan. Life doesn’t work that way. But having a skill of protecting yourself is important. If you don’t have any of these skills, it can be disastrous if we take things to their ultimate conclusion. If you know what you’re doing, you’ll have an air of confidence that will make you seem like a harder challenge to someone seeking a target. It’s not about being cocky, but you’re not consumed by fear.”