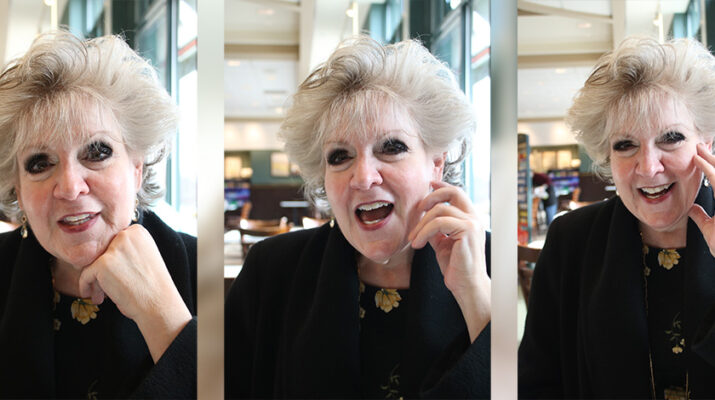 Angela Uttaro wants to share what she’s learned after her cancer diagnosis. She can look you in the eye to give you advice that just might save your life or give you more years of it.

“You’re not going to die tomorrow,” she said, passing on the wisdom her cousin, Ed Kelly, provided her on a similar day five years ago.

With that advice in hand, “tomorrow” takes on a whole new meaning for you. The time between now and tomorrow looks suddenly different. You have things to do.

And Uttaro passes on the advice from experience: “We are fellow club members. I know you don’t want to be part of this club, but here we are. Do what you need to do. Say what you need to say.

That’s what Uttaro did. She completed intensive research that started within five minutes of the news her family doctor, Megan Terwilliger, had handed her.

“She called and told me I had to come to her office,” Uttaro remembered, “And I say to myself, ‘Crap! She just wants me to make a co-pay. I know that.’”

“Denial is such a beautiful place to live,” she added.

“My doctor told me I have pancreatic cancer and I knew that was not good. She gave me a list of providers and put me in an exam room and I was dialing for dollars right then and there. I was not going to leave her office until I had surgeon and oncologist visits scheduled as soon as possible,” she said.

She found herself at Wilmot Cancer Institute at University of Rochester Medical Center.

Uttaro had two daughters, Bernadette and Elizabeth, at home in Pittsford.

“Would I have to tell my children I might not make it to their graduations, because the doctors gave me 22 months?” she said. “I’m not leaving. I’m their mother.”

“I happened to get Dr. David Linehan, who is the chief of surgery. He’s doing research into curing pancreatic cancer. He’s doing things no one else is. And I’m interviewing him. ‘What’s your experience with the Whipple procedure (for pancreatic cancer surgery)? How many have you done? How long does it take?’” she explained.

9/11, then dealing with cancer

Uttaro, now 62, has had a career rating and writing about high-yield, high-grade corporate bonds, selling bonds and now consulting institutions on their fiscal plans. She burned the internet on everything she could find on pancreatic cancer. She tapped her Italian family’s network, cousins who were doctors and others who did research, a neighbor who worked on the cancer drug Opdivo among many others.

“They were my team,” she said. “That’s why I went to Wilmot. Honestly. Because I looked. My doctor here looked at me as a person, as someone worth saving. That’s how they look at all their patients. Find a doctor you have a rapport with. Find a doctor you can tell ‘I’ve got these sores.’”

She was working at Brown Brothers & Harriman on Wall Street on Sept. 11, 2001. The walk from there to pick up her kids (“I had baptized my second daughter on Sept. 9”) and reach home in the heavily polluted air may well have led to the cancer, doctors believe.

Now, 16 years later, the time had come to deal with the cancer.

Linehan was set to operate when Uttaro, from the table, told him, “I know you’re the doctor for me.”
“Why is that?” he asked.

“Because your undergraduate degree is in theology and I know you’re a man of God and faith,” she told him.

‘’You Googled me?” he asked, incredulous.

“You want to know who’s working on you,” she explained. “I think that’s a reasonable thing to do.”

On the day of the operation, Linehan opened her up, didn’t like what he saw and closed her up. Chemotherapy followed, to shrink what he had seen.

The experience of chemo

Uttaro lost her hair and had a list of reactions.

“I was talking to my brother on the way home from work and he said, ‘It sounds like you’re throwing up.’ I told him, ‘That’s because I am throwing up.’”

The second surgery removed pieces of her stomach, pancreas, gall bladder and small intestine. “About 2 ½ pounds of stuff,” she said.

Now, she looks great, sounds great and has become an ardent advocate for Wilmot and Linehan’s research and is part of the institute’s advisory board. She knew she had been lucky about the early diagnosis, fortunate to have ended up with Linehan, and blessed to have so many people come to her aid. But not everyone has that going for them.

She has set out to level the playing field.

“I didn’t want other patients to face the lack of treatment, lack of diagnostic tests, lack of time that I was facing,” she said. “I had done some research at this point and I knew how dire my situation was and that time was not on my side.”

She literally started fundraising to support Linehan’s work at Wilmot as chemo began. She had promised him she would help with fundraising.

“I was bald,” she said. “I was trying to raise as much money as I could. She also brought in $17,000 by organizing the George Eastman Philanthropy 5K. She petitioned her former company, Oppenheimer Funds, and received a $20,000 grant for research.

Her team shows up for the annual 5Ks (and a virtual event in 2020); a whole group of people sporting sparkling halos, Mary’s Angels.

In December, she put on the Mary and Bright fundraiser showcasing 15 local small businesses at the Kings Bend Park in Pittsford. She worked it to support research at Wilmot and for Linehan, but also used it to recognize the people who were participating, “small businesses that I thought could use some recognition,” she said.

She urged them to give out gift cards to bring more traffic into their businesses or online.

Uttaro’s efforts have been highlighted at the annual Wilmot Discovery Ball fundraiser, on a night when more than $800,000 was raised for Wilmot research. She also wrote a letter to cancer patients (https://m.youtube.com/watch?v=UFX4mNOy0Wg).

She knows that doctors and nurses saved her life, but has also pressed a personal philosophy that she believes can help others who get the bad news that Mr. Cancer has paid a visit.
“I could make the rest of my life miserable,” she said. “Or, I could be happy.”

Angela Uttaro is a cancer survivor who has become a serious fundraiser for research at Wilmot Cancer Institute, especially that of physician David Linehan, who specializes in pancreatic cancer, which is a very deadly form of cancer. Uttaro and her team of Mary’s Angels participate in raising funds through the annual George Eastman Philanthropic 5K and wear halos in memory of people — especially those named Mary, who have died from cancer.