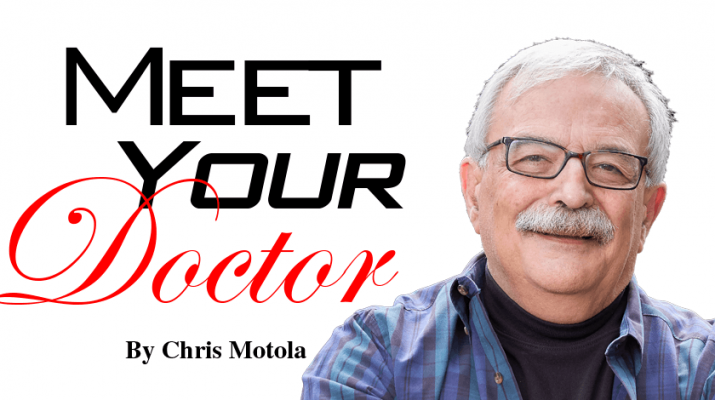 Features Meet Your Doctor Top Features
May 27, 2019
Posted By: admin

‘Looking back to those dark days when most of my patients died, the idea that we’d be talking about eradicating HIV, curing it, or even just stopping its transmission, is incredible.’

Q: You’ve been involved in AIDS/HIV treatment most of your life. In that time, the disease went from being poorly understood killer that we didn’t want to confront, to a bit of a panic, and eventually to a controllable disease you don’t hear about all that often. What was it like living and working through all of that?

A: I was thinking about this the other day, so I’ll see if I can encapsulate this for you. The first drug for HIV was the drug AZT, which was introduced in 1987. That’s six years into the epidemic. So we had no drugs that even came close to working until then. So there was a pretty difficult period of time — I call it the “dark days” when all we could do is treat the complications of HIV, but couldn’t treat the virus directly. Starting in 1987, the drugs weren’t anywhere near as effective as they are today. They were fairly crude and had a variety of side effects that made them difficult for patients to take over the long haul.

The real breakthrough came around 1995 when a brand-new class of drugs was introduced, and we began to use a combination therapy of three drugs to keep the virus under control. That was the start of what we call the modern era of anti-retrovirals, where we began to see a decrease in deaths and [started seeing] people living longer and healthier. Since then a number of newer agents have been introduced in other classes of drugs, along with some other notable advances in treatment. One is that there is universal agreement that anyone with HIV should be started on these drugs as soon as possible. In the early days we often waited until the immune system was already damaged before we started the drugs; that was never our position here in Rochester. We always started the drugs whenever they were available, but now there’s universal agreement.

Q: What kind of impact does that have on outcomes?

A: We’ve learned that people who are started on treatments as quickly as possible reduce the amount of virus that’s in their blood and, if it gets below a certain level — we call that “undetectable” — those people don’t transmit the virus to other people. So the advances have given us a better understanding of how HIV is transmitted and also a better understanding of how to interrupt or stop transmission. So, now we have biomedical ways of stopping transmission from a HIV-positive person to an HIV-negative person who is at risk. They’re called pre-exposure prophylaxis (PrEP). One pill a day, taken as directed, prevents HIV transmission to HIV-negative people who are at risk of exposure. It’s been very effective.

Q: Is a cure on the horizon, or is that less relevant now?

A: It’s still very relevant. A lot of focus right now is on ending the transmission of HIV. There are several initiatives that speak to what we call EtE [End the Epidemic]. One is a New York state initiative by 2020, another is the United States initiative by 2030 and the Global World Health Organization’s by 2030. So the cure is moving at a different pace than these efforts to stop HIV transmission. But there are a few cases where people have been cured with stem cell transplant procedures. There are mutations in the cells of some people — fewer than 10 percent of the population — that block HIV. They kind of have their own vaccination. Their cells don’t allow HIV to enter, so they don’t get infected. So they’re trying to make that into something that’s widely available at a reasonable cost. Now, a stem cell transplant is a very aggressive treatment that’s very hard on patients with a variety of side effects and complications. It’s not something that can be used widely. But the science behind it may lead to new advances that lead to a widely available cure. That’s still a ways off though. There’s also research into developing a vaccine, which is moving ahead scientifically, but don’t have one that’s as effective as we’d like it to be.

Q: Back to preventing transmission. How long does the protection from pre-exposure prophylaxis (PrEP) last?

A: Recommended dose is usually one pill per day. It’s very well-tolerated. TRUVADA is the name of the drug, but there are others in development, including ones that are a once-a-month injection. So the field is continuing to develop. We’re still building on the process that started in 1995.

Q: Tell us more about the initiatives underway.

A: So these anti-epidemic initiatives are, in the absence of a cure or vaccine and all of these programs, fundamentally the same. They focus on widespread HIV testing of people everywhere and linking them to care. The goal is to get them into care and keep them there, and bringing their viral load down to the point where they can’t transmit to others. It also involves widespread use of PrEP to prevent HIV infection in HIV-negative people. So that’s the current state of things here. It’s an exciting time. Looking back to those dark days when most of my patients died, the idea that we’d be talking about eradicating HIV, curing it, or even just stopping its transmission is incredible. We were overwhelmed with sickness and death in those days, so it’s just really gratifying to watch this evolve.

Q: I want to touch on a social aspect. The epidemic hit the gay community particularly hard. Has broader acceptance of the community made it easier to do your job?

A: It’s helped in some ways. The thing is stigma today is very much a part of this. For example, the biggest at-risk group is men of color who have sex with men. Men who have sex with men are still at a higher risk. But heterosexual women, especially heterosexual women of color, are also at risk. I don’t want to overplay that, though, because non-minority populations shouldn’t think it’s not their problem. It’s important to remember that this still is a sexual transmitted disease, and that carries some stigma. So part of the initiative is trying to find ways to destigmatize HIV. If you’re sexually active, you should pay attention to what’s going on: get tested and know your partners. So outreach comes in in trying to get people who aren’t in the system, who are often marginalized, into the system. We use meeting and hookup apps to get people information about testing and PrEP, so it’s a pretty targeted approach. We use fewer posters than we used to and more of a digital strategy. We’re still dealing with stigma, but what’s gone away is the fear of contagion because people aren’t dying of AIDS the way they were in the early days.

Ironically, that puts people between the ages of 13 up to around 40 at more risk, who never lived through dark days in the 80s and don’t take the disease as seriously. We don’t want to use scare tactics, but it is still serious business, even today.

Organizations: Medical Society of the State of New York; Governors Task Force to End the HIV Epidemic by 2020