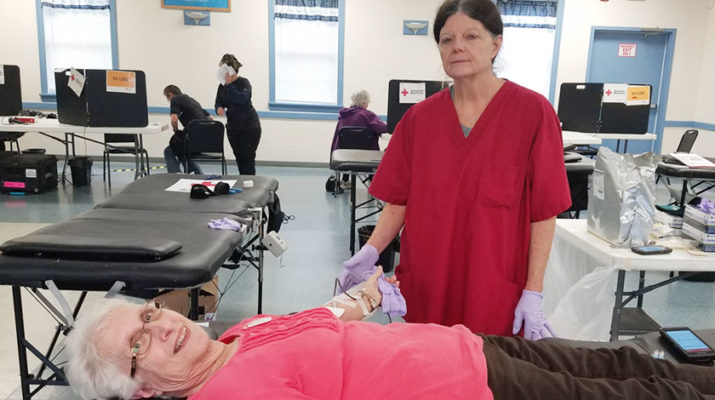 The twinkling lights are turned off, the ornaments are packed away, and it feels like everything can get back to “normal” again.

But just because the holidays are over doesn’t mean gift giving needs to be.

Blood supplies are critically short this time of year and the Red Cross needs donors more than ever to give the gift of health to those in hospitals all around the nation.

National Blood Donor Month has been recognized in the United States for the last 50 years. President Nixon signed a proclamation on New Year’s Eve 1969 stating:

“No manifestation of this generosity of spirit is more expressive, and no gift more priceless in time of personal crisis, than the donation of one’s blood. The voluntary blood donor truly gives life itself.”

Patty Corvaia, who until recently served as external communications manager for the Red Cross New York/Penn region, said that during the busy winter holidays people aren’t donating as often as usual. They are tired, traveling, hosting parties and shopping, so blood donations don’t always make it onto the to-do list. That means in January supplies dip very low. Now, more than ever, the Red Cross needs people to donate blood.

Corvaia said that sometimes potential donors express concern over donating in their senior years. But as long as a person is in good health, age doesn’t preclude them from donating, she said.

“When people think about donating blood, they often wonder what their health and their age mean for their donation. I am happy to say that I met with blood donors that are eighty-plus. If you have a health concern, we always recommend that you talk to your physician because the health of our donors is just as important as the health of our recipients,” said Corvaia.

James Dempsey, 60, of Henrietta, started donating blood when he was in high school back in the late 1970s. Since then he has donated over 14 gallons of blood.

“I come from a large family — five sisters and three brothers — and at some point almost all of us have donated blood as well as my father. I’m willing to bet between all of us as a family we have donated close to 100 gallons of blood.”

Dempsey does a “Power Red” donation about every 116 days. During a power red donation, the donor is able to donate two units of blood using a special machine that draws blood from the arm, collects the red cells, then returns the remaining blood components and saline back to the donor.

Dempsey is a very special Red Cross blood donor not just because of his personal commitment to help others but because he is part of a small group known as “Heroes for Babies.”  Dempsey’s blood type is O negative which is in high demand because it is a universal blood type most often used in emergencies and trauma cases or situations where a patient’s blood type is unknown.

He’s also CMV negative, which makes his blood even more unique. Cytomegalovirus (CMV) is a common virus that most people are exposed to at some point, and the virus is present in the blood of most American adults. But babies who have compromised immune systems cannot fight off CMV the way older children and adults can. Therefore, newborns who need blood transfusions are often given O negative/CMV negative blood like Dempsey’s.

Dempsey encourages others who are able to, to donate as it really doesn’t take much time at all to make a big difference in another person’s life.

“It only takes about an hour to donate doubles and less than that if doing a standard donation. And what is one hour of your time every 56 or 116 days? Back in the day one pint donation could save one life and now with doubles and the magic that goes with that one donation can save up to three lives; that’s not bad for just one hour of your time.”

“The people you work with are always so kind,” he continued. “They do everything they can to make you comfortable. They tell you exactly what they are going to do so there are no surprises. If you drink plenty of water—an extra glass or two— the day before donating things go much quicker. The blood you donate is used to help save people’s lives.”

I’m unable to donate blood. What else can I do to help? 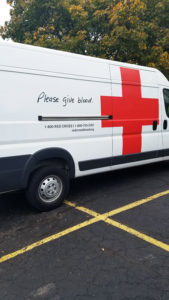 On occasion certain medications or other health issues prevent a person from donating blood. But the Red Cross needs help in a host of other ways, too. They rely on volunteers to find locations for blood drives (churches, schools, community centers, places of business, etc.), work checking donors in at drives, and man their canteen passing out snacks and drinks. Other volunteers drive units of blood from the processing centers to hospitals all around the region.

“Volunteers are just as important as the actual blood donor who gives the blood,” Corvaia told 55 Plus magazine. “They’re the ones that bring the people together into a room, into a facility, into a place of worship, or a community center, and make it possible.”

Terry Kirkpatrick of Gates is 70 years old and donates blood four or five a times a year. But that isn’t where his giving ends. He is a dedicated volunteer who helps out at blood drives all over the area. He started with the Red Cross when he left his job at Kodak three years ago. He knew that he, “simply couldn’t go from working forty or more hours a week to zero. I needed to explore volunteer opportunities. The first thing that came to mind, because I’d been donating for a number of years, was the Red Cross.”

He didn’t hesitate to sign up and complete an orientation session. His first day with the Red Cross was two days after his last day at Kodak.

“This is the perfect fit for me. I never regretted it once.”

To learn more about the Red Cross and blood donations visit redcrossblood.org or call 1-800-733-2767.

Photo: Staff member Colleen Calnan, 62 ,of Irondequoit, helps donor Sandra Phillips, 75, of Clarkson, with her blood donation at a Brockport blood drive. Phillips has been donating blood for over 20 years.