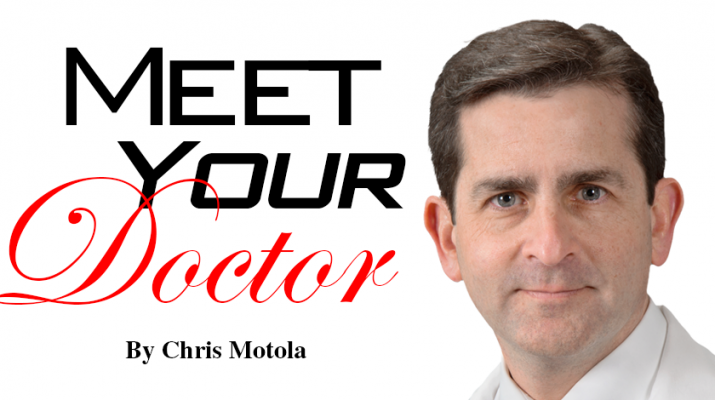 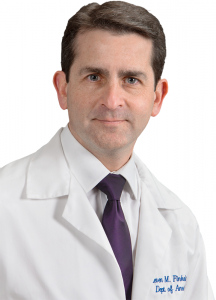 Q: You’ve recently been promoting nitrous oxide as an anesthetic for women in labor. What advantages does it provide?

A: In January Highland Hospital became the first in the region to offer self-administered nitrous oxide to laboring mothers. It’s a new option. We’ve been relying on epidural anesthesia for women in labor; it’s a needle injected into the lower back. A small catheter goes through the needle, and the woman gets anesthetic medication slowly pumped into the lower spine. It essentially makes the lower half of the body fall asleep. Nitrous oxide is a completely different mode of minimal analgesia that the patient can deliver to herself. We have a machine called Nitronox which is hooked up to a nitrous oxide tank and delivers a mix of 50 percent nitrous oxide and 50 percent oxygen. The mother holds the mask up to her own face, anticipates the contractions, breathes the nitrous oxide into the mask, then breathes it back out into the mask. The result is a moderate amount of pain control for the contraction compared to an epidural. The pain relief is much less, but the maternal satisfaction rate is very high because it gives the patient a lot of control over the process. Another advantage is that, after the nitrous oxide leaves the mother’s system after a few breaths, she can get up and walk around.

Q: So the pain relief effect is very short-lived?

Q: Is this something you’d offer first before suggesting an epidural?

A: To a large extent it’s a woman’s choice. So, women will go through the entire labor just using nitrous oxide. Some will choose no anesthesia at all. Some will go from nitrous oxide to an epidural. Because we’re in the early stages of using it, we’re trying to figure out its exact place in the armamentarium of anesthesia for labor.

Q: It’s an extremely old form of anesthesia, isn’t it? Why does it seem to cyclically come in and out of favor?

A: Yes, it’s been used for anesthesia since the late 1700s. It’s been used on and off. It fell out of favor when epidurals started becoming more and more effective and became the primary mode of anesthesia for labor in the U.S. But nitrous oxide’s been very popular in Europe, Canada and Australia for quite some time. I think one of the big recent changes is the existence of this machine that can be controlled by the mother that delivers a fixed percentage of nitrous oxide. That’s only been available for the last few years. At this point somewhere around 150 hospitals in the United States are using it.

Q: Is this mixture always optimal, or do you tweak it?

A: For most healthy women, 50 percent is just enough to take the edge off the pain without seriously depressing consciousness. In the operating room, in the dentist’s office, we can dose it up to deeper levels of pain control, but we feel 50 percent is a safe concentration when not mixed with other medications.

Q: I could be wrong, but my impression is that patient-directed medications are unusual these days. What do you think makes a drug good for at-will use?

A: There is some degree of control with epidural medication. So, the pump that we hook the epidural up to has a button that the woman can press to get a booster dose. Like the nitrous oxide, that helps lead to more maternal satisfaction.

Q: How’s the response been?

A: We’ve doing it since late January. So far, more women like it than don’t. Some women haven’t felt that it was enough. Some have moved on to epidurals and appreciated both modes during different stages of labor.

Q: Do you see broader uses for this kind of nitrous oxide delivery?

A: We do still use nitrous oxide in the operating room, though less frequently than we used to. We have allowed women who have been using nitrous oxide in labor in to repair of episiotomy or perineal tears. That happens sometimes.

Q: What brought this method to your attention?

Q: Broadly speaking, what role is there for pain in medicine. Is it something that should be suppressed as much as possible, or are there useful amounts of it?

A: Taking into account the opioid crisis, our focus has gone from pain control as a sixth vital sign to functionality. In other words, can the patient function on a day-to-day basis with a controllable amount of pain.

Q: What developments do you see emerging in your specialty?

A: For a while we’ve had a focus on multi-modal analgesia. So, I foresee we’ll be relying a lot more on combination therapies and less on opioid medications. I think that’s going to be more of a focus going forward.