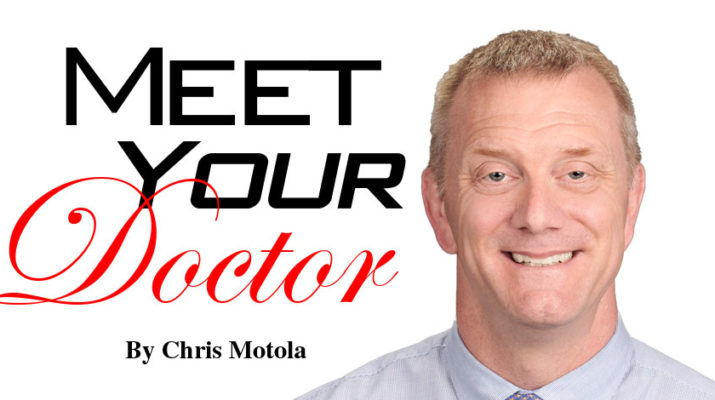 For Chicago native physician, main draw to relocate to Clifton Springs was the Finger Lakes area

Q: What brought you to Clifton Springs?

A: I’d say the main draw was the Finger Lakes area. I lived in Ohio and had a pretty good practice there. We decided we wanted a little more outdoor activity options than we’d had there. Ohio is very flat, pretty rural, lots of cornfields. We decided we wanted to go somewhere with more to do. All the lakes nearby, skiing, fishing, all the opportunities to take advantage of the outdoors was a big, big draw for us.

Q: You got your undergraduate degree from Cornell, so I take it you were already pretty familiar with the area?

A: Yeah, I enjoyed all the hiking and fishing around. My family are big concord grape fans, so we’re looking forward to having that readily available. The views as you’re driving around are just beautiful. None of my family has ever skiied because we’ve lived in relatively flat places. I’m looking forward to trying it again after 25 years.

Q: You’re in primary care, but you have a bit of a focus on sports medicine. What got you interested in that?

A: Yes. I did a fair amount of that. I was in the military for 14 years. That was all primarily young, healthy adults who hurt themselves on the job or off-duty. Lots of knee and shoulder exams. So I both enjoy it and I was in a position where I ended up having to do a lot of it.

Q: How does practicing in the military differ from practicing on civilians?

A: A big part of it is what I said; you’re mostly dealing with young, healthy patients. Being in family practice there, I saw a lot of kids, a lot of OB-GYN. I don’t do OB-GYN anymore. But the medical problems are a little different in young people compared to older people. And the stresses on military families are a little bit different than those on civilian families with deployments and the uncertainty that goes with that. There are stresses on civilian families, but they’re different. But the bigger change for me was seeing patients with a diverse age range and keeping in mind some of the illnesses that happen as people get older. I very rarely saw cancer and heart disease in the military.

Q: What experiences were the most transferable between military and civilian practice?

A: I don’t know if it was specific to the military, but listening to patients and not jumping to conclusions. Making sure to follow up. Readdressing issues if the patient comes back. None of that’s probably unique to the military, but I was new to being a doctor so that’s where I learned it.

Q: What does your local patient base look like?

A: I’m taking over for an internal medicine doctor, Dr. [Zbigniew] Lukawski, who had been established here for years. Typically what happens is your patient population ages as you do, but because I’m picking up his patients, I predominantly have an older population. I’m hoping to also bring in a lot of younger families. I like taking care of older patients, but I also like the variety brought in by kids as well.

Q: What kind of impact do you want to have on the local community?

A: My understanding is there’s not a whole lot of pediatric capability in town, so I would like to bring that capability to the town of Clifton Springs.

Q: One of your other big focuses is treating diabetes. What’s your approach to dealing with the disease?

A: So a lot of that is motivational. A lot of control of diabetes can be done with diet and exercise. I’m not saying that’s easy to do, of course. But for many people it can be managed with those. Increasing activity or changing lifestyle choices that led to the development of diabetes in the first place. So trying to work with them to find ways to improve those habits is pretty rewarding. So that’s what I try to do instead of just telling them that they need to be on more medicine.

Q: What are some of the tricks to helping people get over the hump with lifestyle changes?

A: That’s a tough one. It’s different for everyone. You never know what’s going to turn the light on for a particular person. I try to make some kind of connection with my patients that can allow me to do that. I know that’s kind of a wishy-washy answer, but it really is different for everybody.

Q: You’ve lived in a variety of places. You’re from Chicago, you grew up in Marion in Wayne County. You’ve been with the military. How has that helped attune you to the needs of different types of patients?

A: Some things are the same. Medical problems are the same everywhere, but there are some small but important differences. We lived in Seattle, and the community there was pretty active. You’d drive through town and there were people walking around all over the place. That was a big part of the culture there, just hiking and being active. I think that’s similar to here in some places. In Ohio, most of the active people were going to the Y. If you don’t have lakes, hills or an ocean to play on, it does limit your options.