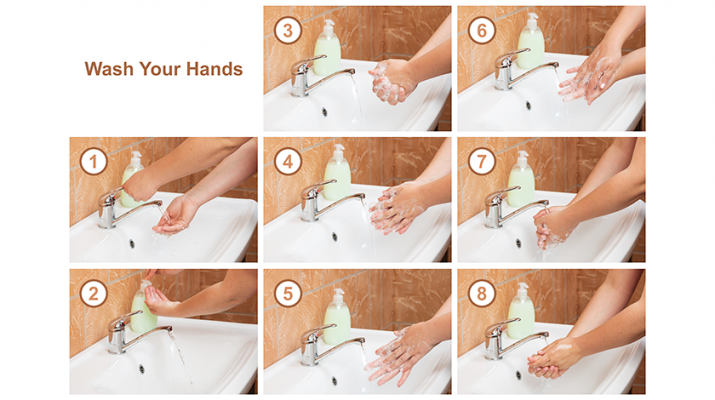 The best way to reduce your risk of catching a cold or influenza doesn’t cost a thing and is something you already know how to do: hand washing.

“Hand washing prevents the spread of viruses and bacteria from person to person,” said physician Nancy M. Bennett, director of the URMC Center for Community Health and Prevention and chairwoman of the CDC’s advisory committee on immunization practices. “Proper hand washing can prevent 80 percent of diarrheal and respiratory disease.”

Most colds and flu aren’t transmitted through the sneezes of sick people. They’re spread through germs left behind on hard surfaces that people pick up later. Good, old-fashioned hand washing removes viruses from the hands so they aren’t transmitted into the body.

Unfortunately, people don’t wash as well or as often as they should. Quick rinses, just rubbing the fingers together a moment or skipping soap don’t work that well.

“Some people don’t wash their hands at all,” said to Mary Beer, RN, public health educator with Ontario County Public Health”People don’t wash as thoroughly as they should.”

She said that proper hand washing means using warm water and soap, vigorous rubbing and scrubbing the fronts and backs of the hands, between the fingers and under the fingernails. Anti-bacterial soap isn’t necessary to kill germs.

Duration also makes a difference. She recommends washing for as long as it takes to sing the “Happy Birthday” song.

After rinsing, drying on a towel applies more friction to the hands rather than using a hand dryer.

“After you dry your hands, don’t reach for the door handle to get out of the bathroom in a public place,” Beer said.

She covers the handle with her jacket or shirt to avoid contaminating her hands by touching the handle. Beer said that using an alcohol-based hand sanitizer when a sink isn’t available can also help reduce exposure to germs.

Since most people pick up a cold or case of the flu by transferring the germs from their hands to their eyes, nose or mouth, it’s important to avoid touching the face while in public.

“It’s a hard thing to never touch your face in public,” Beer said.

Living in a germ-free bubble isn’t advisable — or possible. Beer said that it’s all about cleanliness balanced with sensibility. Simply avoiding people known to be sick and staying home when sick can help reduce the spread of illness.

In addition, managing stress, eating a balanced diet and exercising all help support overall health, including a healthy immune system, which can also help the body fight off colds and flu.

Whatever Happened to Inhaled Flu Vaccine?

For the needle-phobic, inhaled flu vaccine provided an easy way to acquire vaccination. A quick sniff and you’re done — no pain and no bandage required.

Injected flu vaccine reduces risk of flu “between 40 percent and 60 percent among the overall population during seasons when most circulating flu viruses are well-matched to the flu vaccine,” according to the Centers for Disease Control and Prevention (CDC).

The CDC recommends annual flu vaccination for anyone older than 6 months of age; however, only about 40 percent of the US population receives vaccination.

Fear of needles may be partially to blame, but inhaled flu vaccine isn’t coming back this year.

The “mist” style flu vaccine has not been recommended since the 2015-16 flu season since investigators with the Centers for Disease Control and Prevention discovered it ineffective, according to physician Nancy M. Bennett, director of the URMC Center for Community Health and Prevention, and chairwoman of the CDC’s advisory committee on immunization practices.

“Therefore, the advisory committee on immunization practices recommended against its use until the manufacturer could provide new evidence of its effectiveness,” Bennett said.