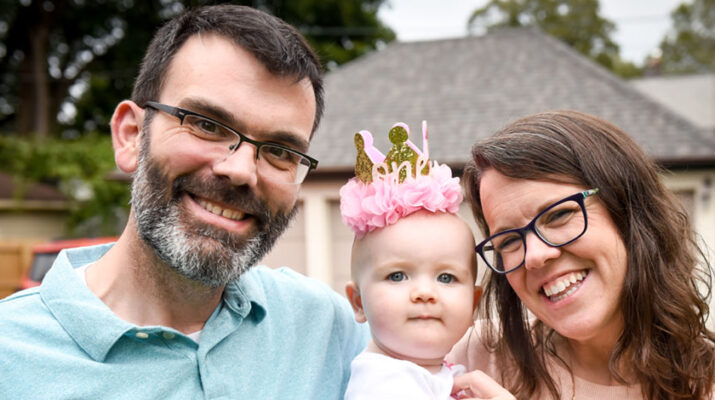 Three years ago, having a baby was probably the last thing on Rachael Tachco’s mind.

The Rochester resident and her husband, Nick Tachco, had a busy, happy life together.

The couple had known each other since age 8 and had been married 16 years. When Tachco’s brother died from drug addiction, they began to stop to think about the meaning of life.

“We had a lot of time under our belts,” Tachco said. “That mixed with sorrowful stuff made us think about our full throttle living and seeing if we can have a baby.”

Unlike most women her age, Tachco became pregnant right away at age 40. And like any woman at this age, her healthcare providers followed her closely.

“We got checked out all the time,” she said. “I’m an anxious, high-energy person.”

She felt eager to make sure the baby was doing well and underwent any test or scan offered. She also connected with a doula from Beautiful Birth Choices, which serves the Rochester area. Doulas offer birth education and support to help mothers before, during and after birthing.

“I leaned into mindfulness and all of the doula work,”Tachco said. “Because of my brother’s issues with substances, I wanted a medication-free birth if I didn’t have to have medication.”

She credits her classes with her doula, along with having a birth plan with making her birthing experience very easy. She was able to have a natural labor without pain medication at Highland Hospital when she brought Corrina Suzanne into the world.

Adjusting to having a baby in their lives was another change for the couple. Tachco said that career-wise, becoming a mom at 40 was easier than if she had been younger.

“I’d been established in my career so long,” she said. “I found ways to make it work.”

She thinks if she had been a less experienced professional trying to tackle both new motherhood and a new career, she would have had a harder time.

Tachco said her family’s willingness to provide childcare has helped her and her husband continue to work and have some personal time.

She has found that having Corrina has helped her better relate to people.

“I was always a civically engaged person, a civil servant,” Tachco said. “Having the baby has made me more passionate to help people who are underserved. Everyone is someone’s child. I couldn’t have understood that as deeply without being a mom.”

She also thinks that as a more mature mom, she possesses much more patience than she would have had for Corrina if she were younger.

Tachco has also met many new friends through her experience. While all her friends her own age have teenagers by now, she has made additional friends through the Beautiful Birth Choices support groups, like Breastfeeding Café.

“I’m 10 years older on average than most, but it’s a sweet, sweet place to meet and have community,” she said.

What she feels she did miss as an older mom is the energy level she had in her 20s.

Despite this, “We say all the time it’s the most wonderful thing to happen to us,” Tachco said. “We’d had lots of fun and had never tried for a baby. It has brought a lot of joy to us to see the world through a child’s eyes. She’s hilarious and loves dancing. She’s not a fan of gray days, but when it’s snowing, she’ll go outside. We just got kittens to add to the mayhem.”

She encourages anyone who does not have children to consider becoming parents.

“I feel like our life has only become enriched,” Tachco said. “I’m more tired than I’ve ever been, but more joyful.

“Having this sweet baby put the world into Technicolor. I thought I had a colorful full life before but it’s a heart explosion to have a baby. It’s the sweetest thing ever. I’m so thankful that we were able to have a baby.”