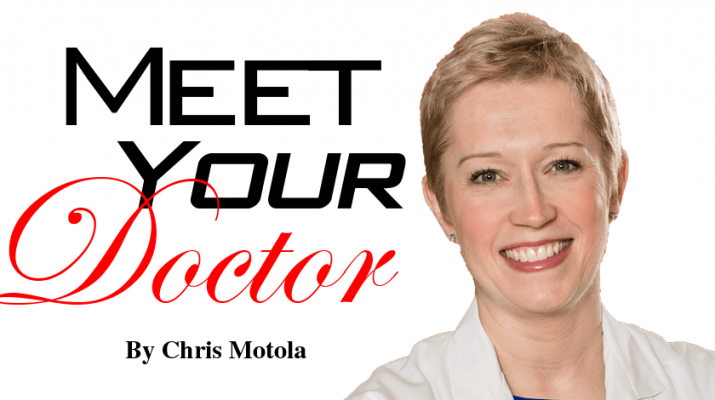 Q: You do a lot of outreach, I understand.

A: I’m a pediatrician at Golisano Children’s Hospital and I also am a spokesperson for the American Academy of Pediatrics, so I do a lot of work with the media both locally and nationally.

Q: A big topic you’re dealing with now is vaccinations. What are some of the public health problems we’re seeing?

A: The most pressing issue is the recent measles outbreak. Here in Monroe County we’ve had seven cases, which isn’t as bad as what they’re seeing downstate where they have hundreds and hundreds of cases, but it’s still a lot. The disease had effectively been eradicated in the United States, but with the rise of the anti-vaccination movement, these diseases are starting to come back. It’s such a terrible disease and such a contagious disease. Monroe County has historically had excellent vaccination rates, but there are some areas where the vaccination rates are low and, sure enough, the disease was able to spread into those communities.

Q: Growing up, I knew measles by name, knew it existed and had a vague sense that it involved a rash. Why should parents, and the community in general, take it seriously?

A: Well, it kills about one in every 1,000 people who get it. And if it doesn’t kill, it’s just a miserable illness to have. Fevers, congestion and a horrible, horrible rash. So it’s miserable and uncomfortable for many days, and then it can have a lot of side effects, including infections in the brain and the tissues around the brain. It may not be fatal, but it may make you unable to function normally. It’s also unusual in that it can have a delayed, fatal side effect many years later, where you develop an infection in the brain that, if you get it, is almost universally fatal. So you may make it through the illness just fine and then five, 10 years later develop this other process that you wouldn’t have gotten if you hadn’t had measles.

Q: Is that the disease flaring up again or an opportunistic infection?

A: It’s kind of complicated to explain. It’s a form of encephalitis that’s more or less a delayed reactionary process. It’s not a reactivation of the disease or different infection. It’s just kind of a very delayed process. The important thing to understand is that measles increases your risk of problems down the road.

Q: Why do you think the anti-vaccination campaigns have been this “successful?”

A: I think parents and people who care about children are doing what they think is right for their children and, unfortunately, there’s a lot of misinformation out there. Fear is a powerful motivator. So if you’re a parent and hear some very scary stories, it can motivate how you behave. The thing is, many of these stories are just that. They’re anecdotes not based in fact. This was coming up at a time when social media was coming up as well. So now we have an abundance of information that isn’t vetted. So there’s this incredible spread of incorrect messages. And we had some celebrities jump onto the idea and, unfortunately, they have a lot of influence in our culture. That kind of combination really helped the rise of misinformation. And now on top of that you have less trust in government, fake news, so it’s harder to get people to trust institutions. And some of it, it’s just human nature. When something bad happens, we complain about it. When nothing bad happens, we don’t say anything. No one is tweeting out that their child got a vaccination and there were no problems even though thousands of children are being vaccinated at any given time. A child may get a vaccination and complain that his or her arm hurts, which is normal, but those will be the stories you hear about. We don’t publicize it when things go the way they’re supposed to.

Q: What kinds of tactics have you found effective in reversing that trend?

A: I think the most important thing is to have a good relationship with patients and parents, to understand where the parents are coming from, where they’re getting their information, what was it that they’re concerned about. You just have to have a conversation. I’ve heard the whole gamut. Sometimes it’s really easy to clarify misunderstandings, other times it’s something deeper or more complicated. Sometimes a parent has had a bad experience with the medical community. That can be harder to overcome. But saying anti-vaxxers are stupid isn’t going to get us anywhere. I believe they want to do the right thing for their children. Unfortunately evidence suggests they’re making decisions based on bad information.

Q: Are there any other strategies that can help reduce the spread of infection to children who haven’t been vaccinated?

A: Unfortunately not a lot. We love to vaccinate against every disease that we can. Unfortunately they don’t all lend themselves to vaccination. Others we’re still working on. A lot of these infections are incredibly dangerous. A lot of them are viruses, and viruses can’t be treated with antibiotics. It’s not really a wash-your-hands-and-cover-your-mouth situation. As for controlling the spread, when someone gets measles, it’s a huge impact on the family, not just from being sick but because people need to be quarantined for a long period of time. So it’s loss of access to work, loss of access to school.

Q: Can vaccinated individuals carry measles even if they’re not affected by the disease themselves?

A: Once you get the initial vaccination and then the booster shot, the vaccine is about 96 – 98% effective. There are some people whose immune systems may work a little differently who don’t get as much immunity from it, so there’s a very small risk later in life that you could get it later in life if you were exposed. But high vaccination rates help keep it out of the community, so there’s less chance you’ll be exposed in the first place.

Q: Are we victims of our own success when it comes to vaccinations? Many of these diseases probably don’t seem real to people now.

A: Most definitely. If you talk to grandparents, they’ll tell you how awful it was. And if you look out West in Seattle and Oregon where they’ve had even bigger problems with measles, their vaccination rates are going up because people are seeing how bad it is again. Once people were faced with it, they decided to vaccinate.

Q: What would you say to parents to put their minds at ease concerning the supposed risks from vaccines.

A: There really aren’t any common dangerous side effects from vaccines. I make sure both myself and my children are vaccinated because I think it’s the safest choice to keep us healthy. The only real common side effect is a sore muscle at the site of the injection, and that’s it. There are very rare cases of allergic reactions, but again, the safest choice is to vaccinate.